Aspiration and a truckload of charm

OCT’s spirited 2022-23 opener ushers in the theater’s theme for this season: striving for more in life. 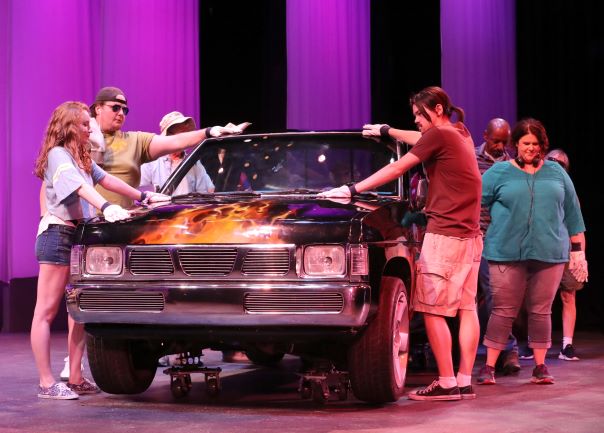 Cast members keep their hands on the pickup truck during a dress rehearsal of Hands On a Hardbody at the Ocala Civic Theatre in Ocala, Fla. on Monday, August 29, 2022. [Bruce Ackerman/Ocala Gazette] 2022.

From the setbacks of COVID-19 to rising inflation, Ocala Civic Theatre (OCT) patrons might well relate to the yearnings and struggles belted out in “Hands on a Hardbody.”

OCT’s season opener runs through Sept. 18 and features a diverse cast of different ages and backgrounds, but their characters have one thing in common: They want more from life, to have “a piece of the pie,” as one of the show’s numbers professes.

Described by OCT as “a tale of pluck, luck and a shiny truck,” “Hands on a Hardbody” centers on a literal hands-on endurance contest in Longview, Texas. The last contestant still touching a coveted 1993 Nissan “hardbody” pickup truck gets to drive it home. The black, flame-painted pickup is displayed on revolving casters throughout the entire show. It was gutted out to make transport easier.

During the contest juggernaut, we witness all facets of human nature — desperation, insecurity, overconfidence, longing, anger, delusions and deception — from the contestants and the sponsoring dealership.

One might wonder, “How boring is it going to be watching people stand around a truck and sing for two hours?”

You don’t. That’s when the magical surreality of musical theater kicks in. For each musical number, choreography, harmonies and the clever touches of OCT’s masterful stage techs enhance the scenography as the play’s competitors let go and step away to unburden themselves about their life struggles.

During the numbers, the contestants divulge relatable problems via song with the other competitors, aided by clever OCT lighting backdrops. Special kudos to lighting designer David Castaneda for his killer silhouettes and mood enhancements.

Director/Musical Director Jason Bartosic pulls double duty, returning to OCT for the first time in almost 10 years. (He served as musical director for the theater from 2003 to 2012). He has a lot on his plate steering a large cast of locals. For this show, energy, vocal prowess and timing are crucial, and the cast he selected certainly has the potential to keep the play trucking once the curtain goes up.

One of the most memorable musical production examples in the show features an ex-Desert Storm Marine (Shannon DeVaughn) lamenting his wish to be stronger off the battlefield. The sky behind goes blood-red, adding vivid intensity to the poignant number.

Another touching number depicts a wife (Celia Bills) wishing her husband of 30 years would stop doing everything to avoid being alone with her.

Not all of the tunes are sorrowful or plaintive. More often than not, the numbers lighten the load with uproarious song and dance, performed by a tight, live rock band that includes Bartosic as conductor and keyboardist, Greg Doss (keyboards), Scott Nadenik (guitar), Jazmine Whipple (bass) and Johnathan Hurst (drums).

The women in the cast do an excellent job harmonizing. Jessica Mongerio is a powerhouse as a Bible-thumping competitor who copes by spontaneously belting out gospel tunes to get her through the ordeal. Actor Daryl Champine is onstage the shortest amount of time but pulls off one of the show’s most spirited numbers, “My Problem Right There.” Melody Murphy, OCT’s director of marketing and public relations, even emerges from the shadowy backstage offices to the theater’s mainstage as the snarky, drawl-intoned Cindy Barnes.

While the plot of “Hands on a Hardbody” might seem a bit far-fetched, it’s actually based on a real-life endurance competition, taking its inspiration from a 1997 documentary of the same name. Amanda Green (“Mr. Saturday Night” and “High Fidelity”) wrote the lyrics and the tunes mix blues, gospel and honky-tonk, composed by Phish front-man Trey Anastasio. The Associated Press claims that “the whole thing is a pleasing, tuneful, heart-filled ode to small towns and American dreams,” and they’re right.

The musical touches on the human need to aspire for more out of life, which is a theme shared by all the productions in OCT’s 2022-23 season.

Also going forward this season, advertisers are getting more visibility at the theater. For “Hands on a Hardbody,” all the theater’s advertisers will be featured on a continuous loop on two big-screen TVs in the lobby. According to Murphy, the feature “will give greater visibility to our advertisers, with the benefit of larger ads and the possibility of color at no extra charge.”

For tickets and other information, visit ocalacivictheatre.com.