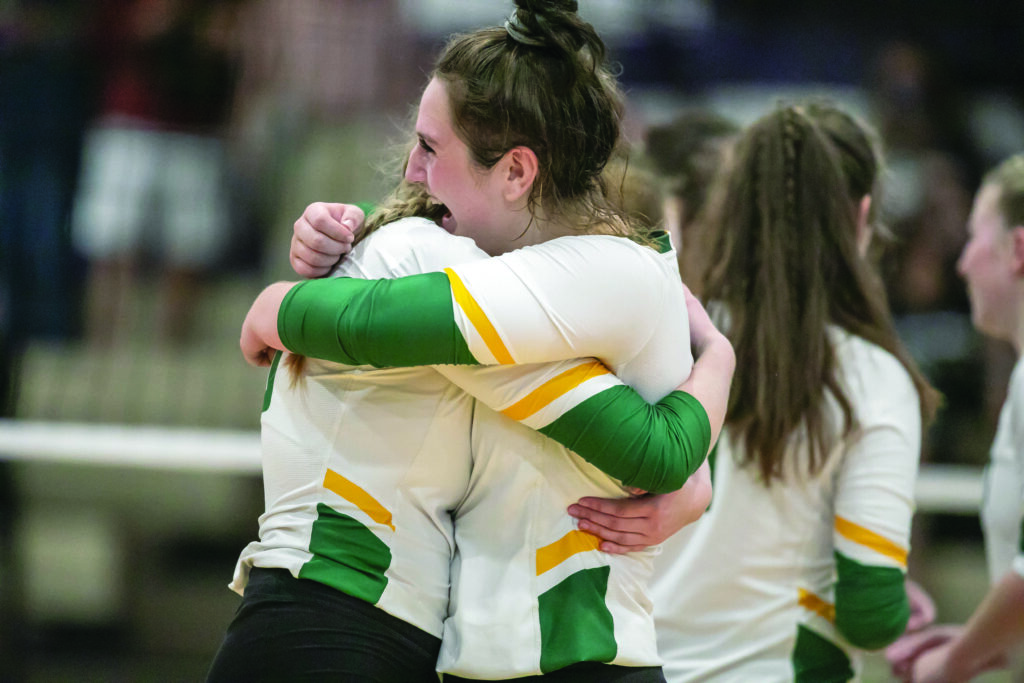 The Forest girls volleyball team celebrates as they win their match against Buchholz High School in the 6A District 4 play at Gainesville High School in Gainesville, Florida on Tuesday October 13, 2020. Forest won three sets to one. [Alan Youngblood/special to the Ocala Gazette)

As district play gets underway, many Marion County teams have already met their demise, and are left with no other choice but to look ahead to the 2021 season.

Others, however, are full steam ahead in hopes of claiming the title of district champions and advancing onto Regionals.

In the first match-up for this District, St. John faced Saint Francis Catholic on Oct. 12, and although the first and third sets were close, the Saints prevailed 3-0.

Meadowbrook and Redeemer Christian both received byes in round 1.

Following St. John’s win, they pushed forward in the bracket and looked across the net at Redeemer Christian in round two on Oct. 13.  The young Saints team was led by Sophia Ochoa (11 kills) and Rylee Palmateer (15 kills), giving St. John the win, 3 sets to 1.

On the other side of the bracket, Meadowbrook played Seven Rivers, which defeated Countryside Christian in round one. Although Meadowbrook lost the first set 19-25, the girls were able to rally and win the next three sets.

Meadowbrook will host St. John for the championship game at 6 p.m. on Oct. 15.

Trinity Catholic faced Taylor on Oct. 13 in Pierson, FL.  The lady Celtics dominated and won the bout 3-0. Trinity Catholic’s offense was led by Cloe Teter, Kiana Laborde and Amelia Fitzpatrick with 11 kills each. In addition to the strong offensive stance, minimal ballhandling errors facilitated TC’s win. The Celtics face off against Father Lopez for the championship on Oct. 15. Father Lopez enters the game with a record of 10-1.  The match will again be in Pierson, with a starting time of 6 p.m.

Also with a bye in round one, North Marion squared off against Citrus in round two. As Citrus entered the match with a record of 11-2 on the season, North Marion had their work cut out for them. However, 11 aces and a combined 21 kills allowed the Colts to topple Citrus 3-0.

North Marion moves on to face Crystal River in the championship on Oct. 15.  As Crystal River suffered two losses in the regular season to Citrus, both 3-0, North Marion is strongly favored to move on to the Regional Tournament next week.

Lake Weir drew a bye in round one, and will face Vanguard, which defeated Belleview on Oct. 12, 3 sets to 0, with the set scores being 25-16, 25-13 and 25-21. Vanguard’s offense was led by sophomore duo Sophie Reed with 31 assists and Emma Ehman with an astounding 21 kills on the night.

Vanguard faced Lake Weir on Oct. 14 for the championship and as with the regular season, Vanguard trounced Lake Weir 3-0.  Vanguard dominated the first two sets 25-7 and 25-8.   Allowing their 2nd string to play in the 3rd set made the score much closer at 25-23.  The lady Knights were led once again by Ehman who had 13 kills on the night, made possible through the assistance of setter Reed.  Also contributing to the offense with kills were Ruby Owen with eight and Adyla Kerley with seven.

Vanguard is officially district champions and will move on to Regionals next week.

The sole Marion County team in the 6A-District 5 bracket, undefeated Forest (12-0 enters the tournament not having lost a single set. Forest faced Buchholz out of Gainesville on Oct. 13 and triumphed 3-1. Although the Wildcats, didn’t have the strong offensive stance they are accustomed to, with 11 aces and very few errors on the night, Forest’s consistency continues to pay off.  In addition, Forest’s scrappiness enabled them to walk away with 96 hard earned digs.   Buchholz being the first real challenge of 2020 for Forest, Coach Collins reflected on the game stating, “The team responded well to being under pressure for the first time this season.”

Moving forward in the bracket, Forest will face Gainesville at 7 p.m. on Oct. 15.  As Gainesville lost both regular season bouts to Buchholz 3 sets to 0, Forest should walk away as District Champions and move forward to Regionals.

Having finished the regular season at 7-5, West Port had a tough season. Unfortunately, they were unable to end the 2020 season on a high note and were defeated by East Ridge in the first round 3-0. East Ridge will face Apopka for the Championship.