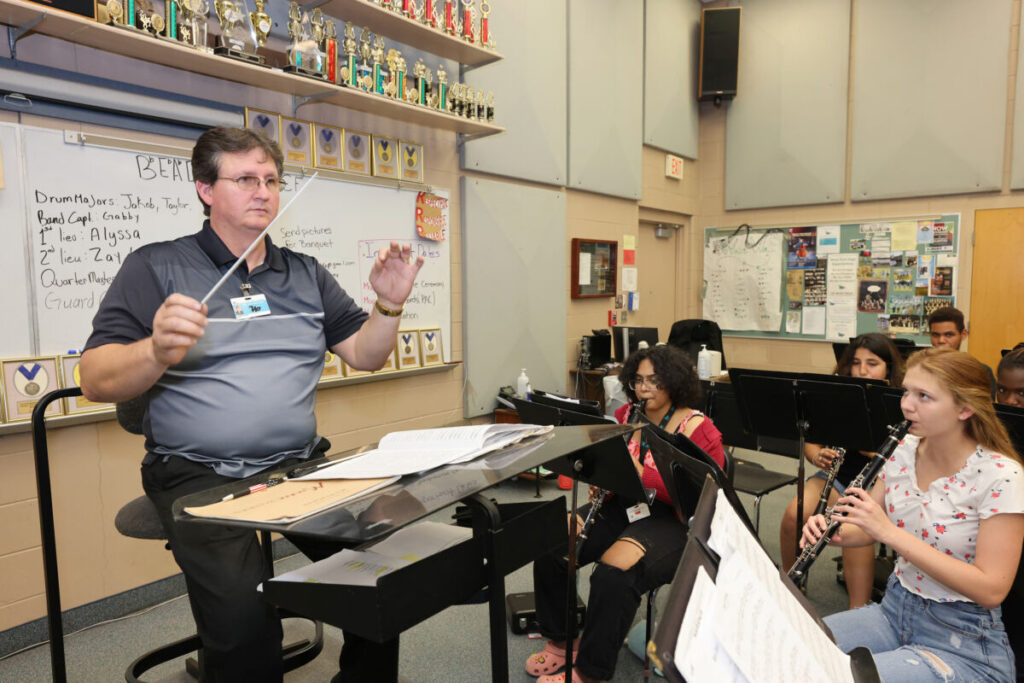 Rodney “Scotty” Vance conducts his students in the West Port Band in the band room during a class at West Port High School in Ocala on Tuesday, May 17, 2022. [Bruce Ackerman/Ocala Gazette] 2022.

A trumpet player himself, he has molded young musicians into some of the best in Marion County and the state of Florida, teaching them tonal structures, modes and harmonic progressions. But, if it weren’t for a twist of fate, Vance may have never taught at West Port.

After he graduated from Florida State University with a bachelor’s degree in music education, Vance and his wife, Holly, moved to Ocala. Holly had graduated the same year and wanted to move to Gainesville to teach veterinary medicine, but Vance got his first teaching job in Wildwood. Ocala was the ideal in-between spot.

His second job scored him a coveted position in one of only four university research developmental schools in the state. He almost didn’t leave.

“My wife saw in the paper in early 2000 that they were building a new school right next to where we lived,” Vance recalled. “We lived around five miles away, and she said, ‘You should interview there.’  I was, like, ‘Well, I love teaching at P.K. Yonge.’” (P.K. Yonge Developmental Research School is affiliated with the University of Florida in Gainesville).

After much thought, the father of three decided to interview at West Port, and he’s been there ever since. Now, in his 29th year of teaching, Vance leads the Symphonic Band, two jazz bands, the visual ensemble (aka color guard) and the school’s marching band.

He sees retirement on the horizon, but his Marion County Public Schools bio says he’s “graduating in 2027.” Just what does he mean by graduating?

“I’m just retiring then, really, but I call it graduating,” Vance responded matter-of-factly but with a hint of a laugh.

“I’ve told every principal who’s been here that I want an honorary West Port High School diploma when I graduate from teaching,” he added with sly humor. “I think I will be the longest and the oldest teacher here. I started when the school opened in 2000.”

Under Vance’s direction, West Port jazz bands have consistently rated Superior in state competitions every year since the school opened.

The West Port High School Jazz Combo recently performed a spring concert and scored a spot in the Levitt AMP Ocala Music Series to much acclaim. They will perform at the school’s graduation concert on Saturday, May 21, at the World Equestrian Center.

Vance’s recipe for success? It’s simple: “Listen to great jazz bands, and then have your kids play great music.”

“I’m a part of the Florida Bandmasters Association, and I think it’s just vitally important that we put our students in front of professional adjudicators,” the bandleader explained.

Vance said the judges give extensive feedback and, because they’re also band directors themselves and score exceptionally good ratings for their schools, they know what they’re talking about.

“When the adjudicators give feedback, we follow up by listening to the pieces referenced in class,’’ Vance said. “We play the music on a big surround sound system and then the students have to write notes. We take those notes and we use those to make our band better. It’s a constant cycle of improvement with feedback.”

When the Cocoa, Florida, native receives freshmen and new students, he indoctrinates them into the canon of jazz greats, immersing them in a range of styles, from big band to bebop. He lists some of his all-time favorite musicians as Count Basie, Woody Herman and Buddy Rich.

“I asked my high school band director for role models,” Vance reminisced. “He had mentioned those that I talked about, but the last one he mentioned was Maynard Ferguson. So, being young, I looked up Maynard Ferguson at the record store, and I put in this cassette tape. The first song, “Primal Scream,” just blew me away. I was really inspired.”

Vance shares musical insights after school hours with his students via social media. He admits that his humor leans toward the sarcastic side with his students, and with characteristically deadpan humor, he explained his nickname.

“My official name is Rodney Scott Vance, but my mom wanted to call me Scotty,” he explained. “So, all my friends call me Scotty. So, if someone calls me on the phone and says, ‘Is Rodney Vance there?’ I’m like, ‘Nope.’”

The band director also emphasized that public school bands across Marion County exhibit excellence thanks to the cooperation and support the educators share with one another. It’s a camaraderie unlike anywhere he’s visited, Vance said.

“I love teaching here in Marion County,” Vance effused. “I think we just have a wonderful relationship. We band directors do a lot of in-service (training) together, and we’re always supporting each other and motivating each other to try to get to the next level. We have such a nice relationship … camaraderie and support. We do an all-county band together and students from every single high school get together. And there’s also the middle school version of that too. I feel so blessed to be in a county where we all cherish the music together.”