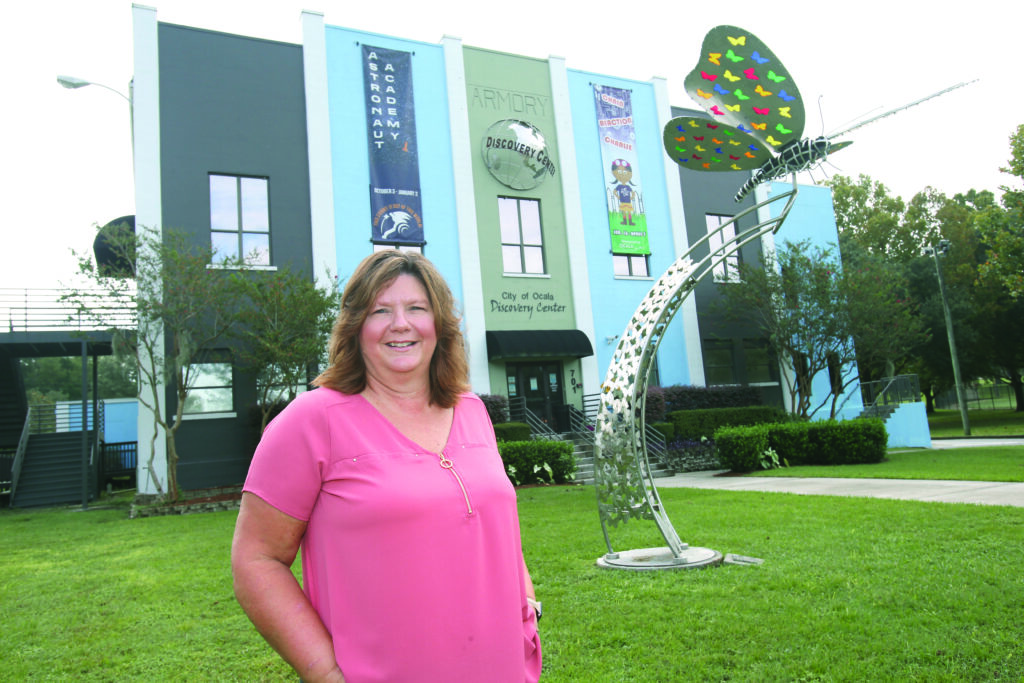 When Kathy Crile took over as director of the Ocala Recreation and Parks in 2008, she already had been a big part of the city’s push to develop sports and recreation facilities. The city had developed sites like Jervey Gantt Recreation Complex and the E.D. Croskey Recreation Center, as well as aquatic centers and ballfields.

Yet, in addition to sports and recreation, as director she was also charged with overseeing the city’s cultural arts activities and projects. It was an area that would grow, indeed explode during her 12-year tenure at the helm of the Recreation and Parks Department.

Crile, 54, retired Wednesday after 32 years with the city, 29 of them with Recreation and Parks. She said what she is most proud of in looking back at her years leading Recreation and Parks is the growth of the cultural arts in the city and the people of the community stepping up to make good things happen.

“I’m super proud of how the community comes together and makes things happen over and over, so that government doesn’t have to do it,” she said.

She points to the Reilly Center for the Arts, housed in what was the old city Memorial Auditorium that was destined for demolition until a group of arts supporters stepped in to save it.

“It’s amazing,” she said. “The gift to the community that that project was … I can tell you the wrecking ball was literally on the way. It was on I-75.”

But citizens and the arts community were motivated to have a center for the performing arts and the Reilly was born.

“They moved a lot faster than we expected,” she remembered. “And what a gift to the community. What a blessing. And now they’re expanding.”

Crile notes the rise of the arts around the city, citing such projects as the Art Park, the Sculpture Stroll in Tuscawilla Park and the murals that now emblazon the sides of buildings downtown.

Crile went to work for the city in the Engineering Department at the age of 22. Three years later, former Recreation and Parks director Dave Pritchard hired her “because she could get things done.” Looking back on what Crile built on top of what was accomplished during Pritchard’s tenure, he said she simply made something good even better.

“We kind of made the cake and she put the frosting on it and made it really nice,” Pritchard said. “It’s always been exciting to see what was coming next because I had been a part of it when it was just talk.”

In addition to boosting the cultural arts in the city, Crile also has overseen the expansion of neighborhood recreational opportunities.

Crile’s latest accomplishment is the completion of a Community Cultural Arts Master Plan. “The whole document is a vision of what we want to be,” she said.

She also led the drafting of a 10-year Recreation and Parks Master Plan that is tied to the city’s Vision 2035 Plan. Among the goals is to have a park within a half mile of every resident, expanded walking trails and connectivity of those trails throughout the city.

“Our City Council just gets it,” Crile said of the plans she has helped write. “During the recession, cities were closing parks and rec, and Ocala was investing in parks and rec. They understand the value of recreation and the cultural arts. We are very forward thinking, but we don’t always have the resources to do what we want.”

Her final project to guide to reality was the new Mary Sue Rich Community Center – what Crile calls the city’s first true community center. Located on the west side on the old Royal Oak charcoal plant site, the facility will sit between the Lillian Bryant Recreation Center and the new Ocala Wetland Recharge Park, the new community center will create “an amazing corridor” for recreation and sports.

Crile said she never saw her department as a pacesetter but rather a helping hand for citizens wanting to make the community better.

“Our model is really set up to help other people be successful running events,” she said.

Nonetheless, there is little doubt Crile and her team have had a definitive impact on the look and feel of the community, especially when it comes to the arts.

“Just look around, the arts have exploded,” said Jaye Baillie, executive director of the Marion Cultural Alliance. “The arts are just everywhere. I’ve worked with Kathy a lot and she’s one of the smartest ladies I know. She gets things done. I’m a huge fan.”

Crile and her husband, Richie, have four grown sons and five grandchildren, whom she plans to spend a lot more time with.

“I started when I was 22, and I’ve literally raised my family at the city of Ocala,” she said.

She plans to remain visible and active in the community. The Fort King project is of particular interest to her and she said she will remain involved in its progress.

“The economic impact of it will be amazing once it’s complete,” she said.

As for what she leaves behind after 32 years?

“It’s a completely different community,” she said. “You know, they used to call Ocala ‘The Friendly City.’ And it really is the friendly city. There are so many good people here.”