Abstract and Beyond: Ocala artist expands into figures for fall 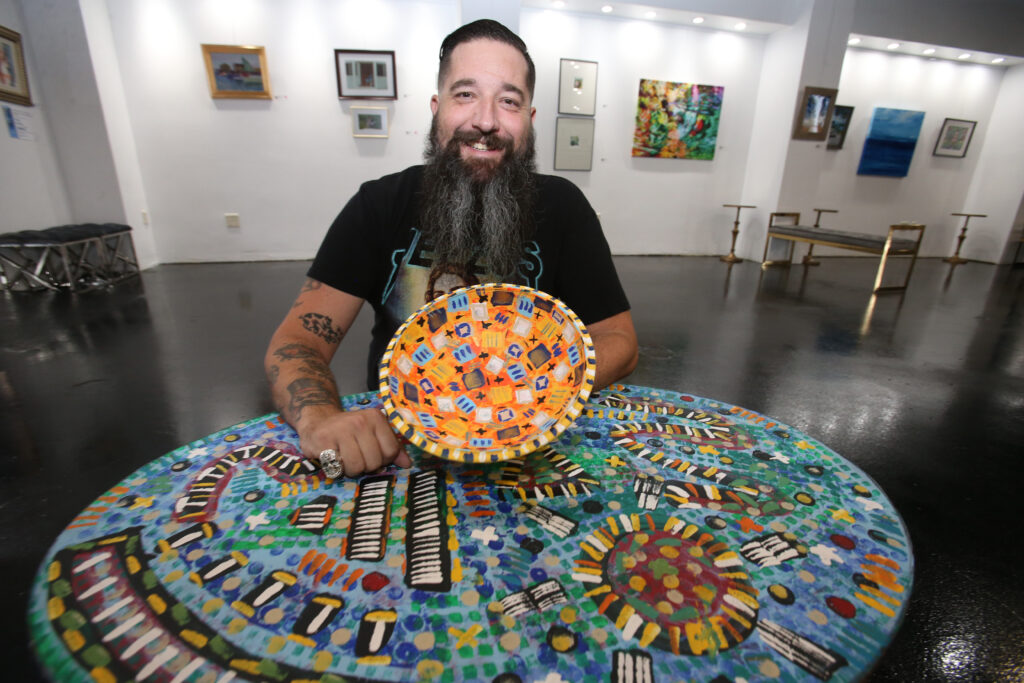 Artist Aaron Thomas poses a oval table and a bowl at NOMA Gallery in Ocala on Aug. 13. [Bruce Ackerman/Ocala Gazette]

For the past year, he’s been making a name for himself with his abstract art – first at NOMA Gallery’s “Art Castle” show in September 2020. Then in April, he had his first pop-up show, “Aesthetic Melancholy,” at NOMA Gallery, which featured his abstract works in acrylic. At the moment, Thomas said, he is focusing more on figures, and he isn’t even sure his friends will recognize his new pieces as his work.

“I can never do one thing; I get bored with it,” Thomas admitted. “I started doing abstracts. Now I’m doing all the figures. I think I have people who aren’t fans of abstract so I’ve been starting to do figuratives and people, the more traditional stuff, just to show that I can do it. And then I’ll probably go back to abstract because that’s what I love to do.”

After his mixed media piece “War Pony” was featured in Marion Cultural Alliance’s (MCA) “Creature Feature” exhibit in August, Thomas entered a painting in MCA’s “Inspired By …” show, which opens Sept. 3. The new piece, he said, is the face of his “favorite artist ever,” and is blended with his style, but is “very interesting” and “unique.”

“When I’m doing people or figures, I even sign it differently,” he said. “Those have not been seen yet. I want it to be the first time they’re like, ‘Where’d that come from? He can do that, too?’”

Born and raised in the Ocala National Forest, Thomas graduated from Lake Weir High School then served in the U.S. Army. He has spent five years working in child protection, the past two as a family advocate for Kids Central. He said painting is his “happiness.”

“It is my therapy,” he said. “That is my happy time when I’m painting, when I’m creating. I paint in my living room or on my porch when it’s not too hot.”

Thomas said he tried college, but it was really hard with PTSD.

“That’s my biggest goal,” he said. “Eventually I want to go back to school. I want to do my master’s in art therapy.”

He met his fiancee and muse, Nikki Upton, just as his art was taking off a year ago.

“My whole life turned around. You can see it in my art,” he said adding, it was the perfect time to get involved in the local arts scene.

“What I love about Ocala now is it’s up and coming. I’m in the right time – not the beginning but definitely not the end. I think the last year it’s exploded even more,” he said. “I got in at the right time and we kicked it into overdrive.”