A Voice Within a Shadow: Amateur photographer’s work selected for NOMA Gallery exhibition 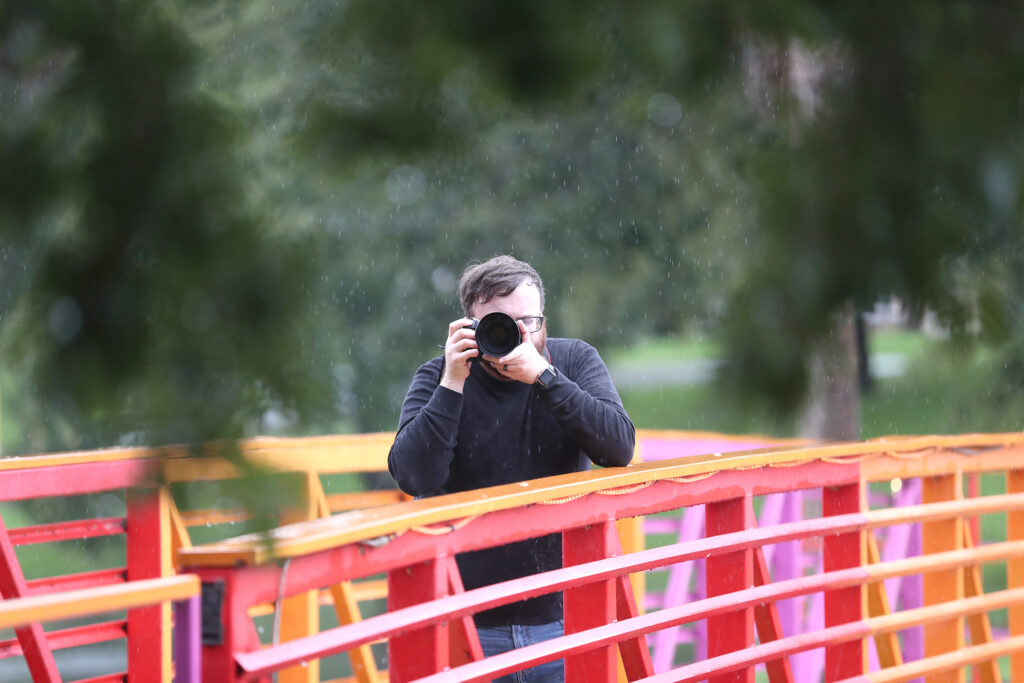 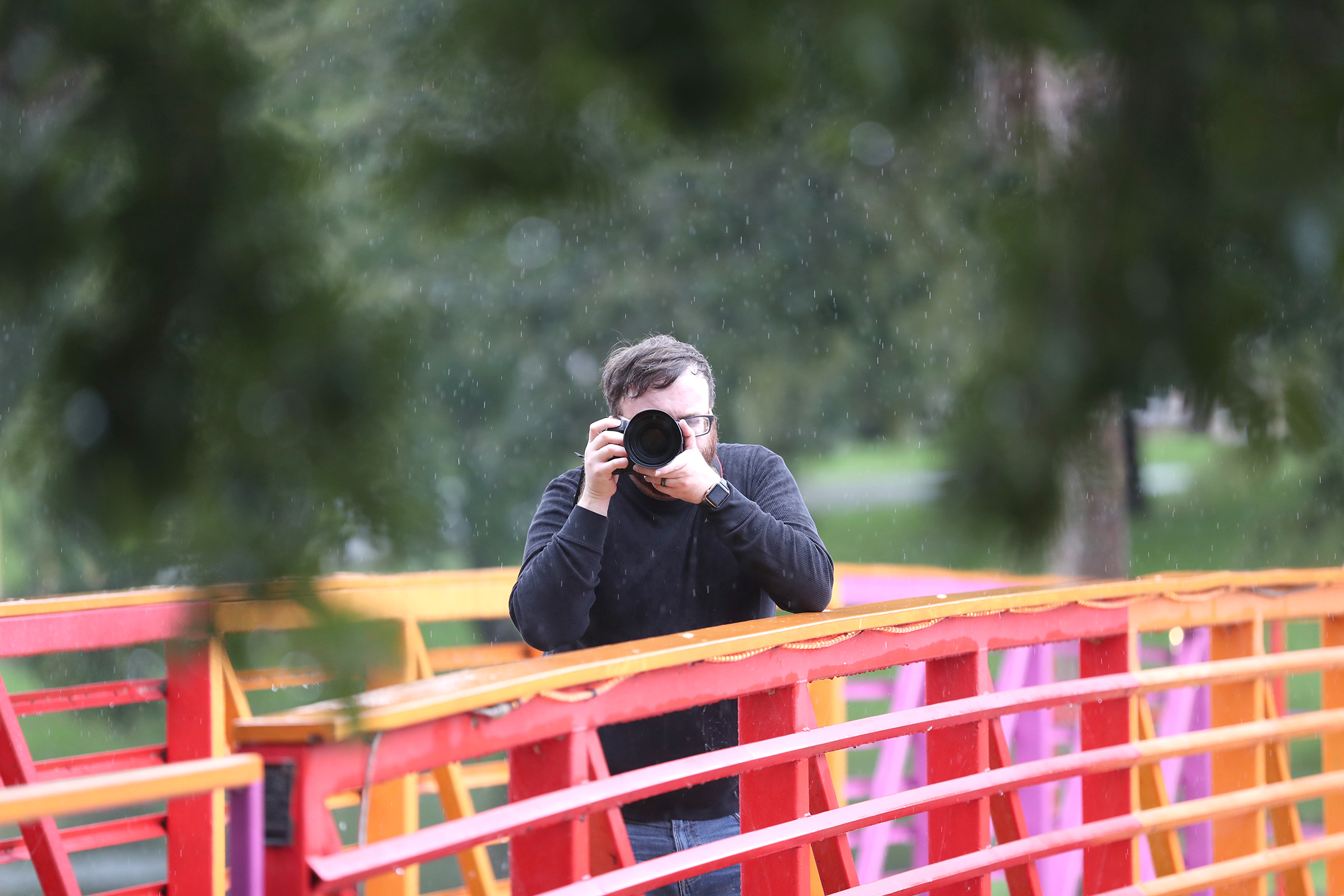 It would only be the second photograph he had ever printed out for his own enjoyment of the many hundreds taken over the last three years.

But it would also prove to be the first photograph that amateur photographer Mark Anderson would place in an art exhibition.

“Printing out your photos is always kind of a big deal,” said Anderson. “It’s like adding something to the world—you better be sure it’s something you think is pretty cool.”

Anderson’s photograph, entitled “Light at the End of the Tunnel,” was recently selected to be included in NOMA Gallery’s latest art exhibition, “Light & Shadows,” on display through Oct. 23.

The gallery’s exhibition is inspired by “chiaroscuro”: One of the canonical painting modes of the Renaissance, according to NOMA’s website. It is the literal definition of light and shade in drawing and painting — as well as the contrasted light and shadow of photography.

Prior to his inclusion in the exhibition, Anderson had never visited the NOMA Gallery before, but he had always wanted to. Little did he know that his first visit to the gallery would be while attending an exhibition that included his own work.

“I’ve always enjoyed art and liked the art of photography in others’ work,” said Anderson. “I just didn’t necessarily think I could do that too.”

Anderson, 35, didn’t pick up photography right away but said he always had a mind for it. It wasn’t until he gained access to the tools of taking pictures—namely, a camera—that he started putting his interest into action.

In early 2016, Anderson started taking journalism classes at the College of Central Florida. With the journalism department’s camera, he finally got his chance to express himself as a photographer through CF’s campus newspaper, “The Patriot Press.”

He started taking his own artistic photographs in early 2018 when he bought his first digital single-lens reflex (or DSLR) camera. Nothing too fancy, he said.

“It was like the package deal that came with the camera bag,” Anderson said. “Like three lenses, and a bunch of odds and ends. I just got frustrated constantly using my phone.”

And though Anderson is not the biggest fan of his earliest efforts, he has grown tremendously, he said, since his salad days.

“I feel like probably any photographer or any artist in general will look back at their earlier stuff after first starting out and like cringing,” Anderson laughed. “Like, what is this? Why did I ever think that looked good? But at the time, you’re like, ‘Oh, yeah, that’s amazing. I’m awesome.’”

In August of 2021, Anderson saw advertisements for NOMA Gallery’s upcoming exhibition and decided to submit some of his work. He found out that his photograph was accepted roughly two weeks later.

Lisa Midgett, owner and operator of the NOMA Gallery, described a selection process that included jurors and a judge. Because so many on the NOMA team know so many of the submitting artists, said Midgett, they have to take themselves out of the process.

Jurors included many Ph.D.- or MFA-level artists, she added. When the jurors were finished, the NOMA team took over and identified the “juried in “and “juried out” pieces and contacted the artists.

“We then hang the show, and a judge determines the winners,” said Midgett. “We use the same criteria as our jurors — Ph.D.- or MFA-level judges.”

According to Midgett, Anderson scored high with jurors because his piece was so on theme.

“He cleverly used a tunnel to backlight his model, creating a burst of light and a silhouette of a woman. It is not an obvious piece; it requires a second look. I enjoyed watching guests study the piece this last week since we opened the show,” said Midgett.

She said, “A lot of artists took the opportunity to create in black and white for this one. I particularly love the burst of color in Mark’s piece. It just glows!” 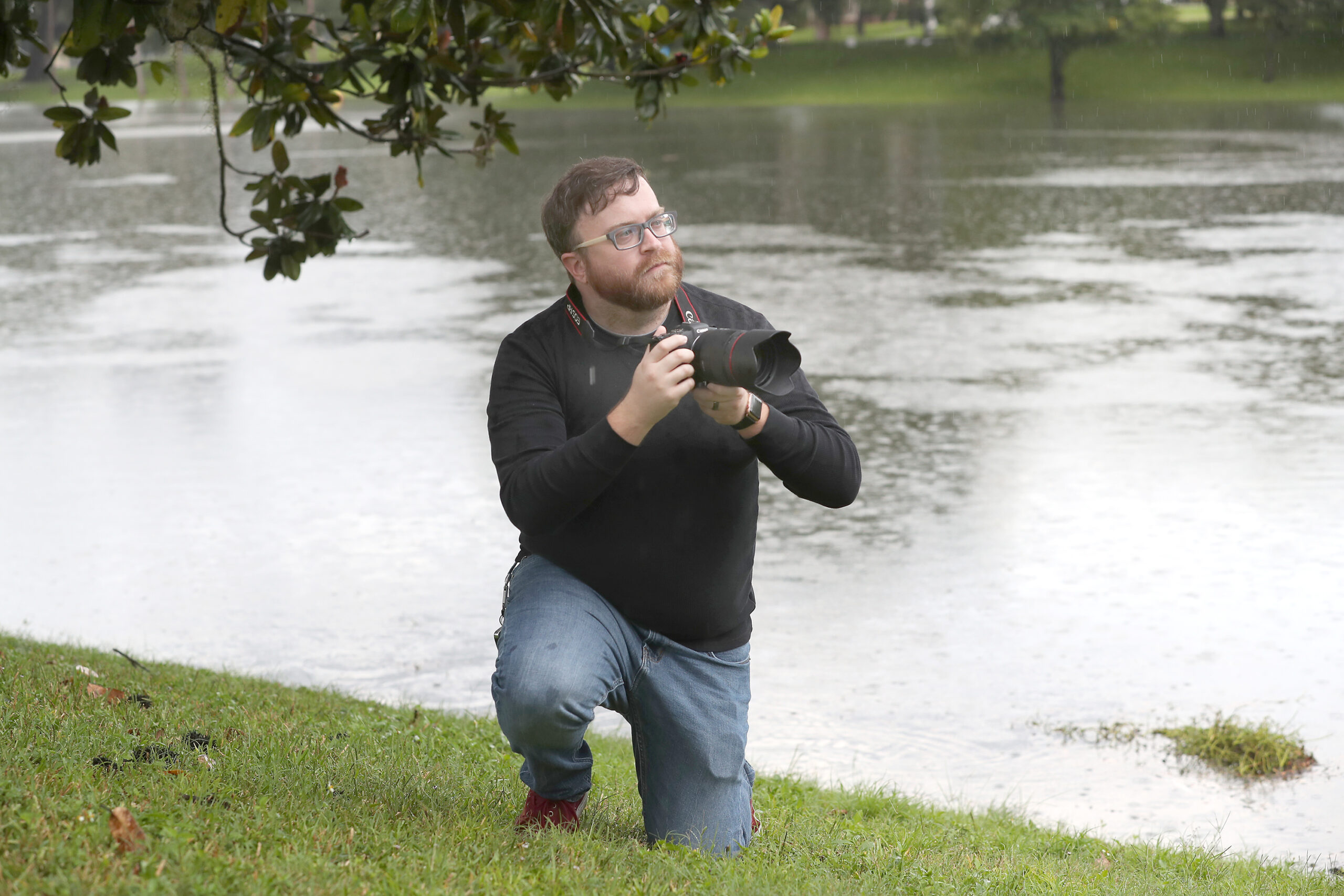 The photograph that Anderson submitted and that was ultimately selected for the exhibition features his wife, Rebecca.

“We were driving back from St. Augustine,” recalled Anderson of the photo shoot. “And we drove past this railroad bridge that had a sidewalk that was running next to it and the sidewalk cut through the embankment of the bridge. With the corrugated steel, I knew we had to stop there and take a picture.”

Anderson and his wife pulled off on the side of the road. He had her walk down the dark tunnel as the sun cut her figure out of the gloom.

“I got some photos that ended up looking pretty cool,” remembered Anderson. “It made it look like a portal or something.”

Midgett said she loves it when NOMA discovers new local artists and gives them a chance to share their art.

“It warms my heart,” she said. “Artists give us a tiny little piece of their soul in each piece they create. They embrace vulnerability and show us their thoughts, passions and talents through their art. I am always thrilled to hear stories like Mark’s because my vision for NOMA has been to embrace and support local artists while also bringing in new work to our community.

“With Mark,” she added. “I feel like NOMA is on mission with both.”

While taking photographs, Anderson explained that he is trying to unlock something in himself—a voice, he called it.

“You have to find your voice within a photograph,” clarified Anderson. “And that’s the thing I’ve always been trying to do.”

He said that he wants to do things in his photography that others aren’t necessarily doing. Because, he said, everyone has a camera these days. If not a DLSR camera, then they have a camera on their phones.

Said Anderson, “So many people have their own photography accounts and do couple or wedding photography. And they’re all very talented. I’m not knocking anybody. It’s just tough to make your voice standout above the rest.”

He hopes that his inclusion in the “Light & Shadows” exhibition gives people attending the show a chance to finally hear his artistic voice loud and clear within his photograph’s many shadows.

“If people look at my photograph and think it’s as cool as I think it is,” said Anderson, “then that’s pretty great. If they see a little bit of me in there somewhere, then that’s all I could really hope for.”