A hand up, not a hand out, for homeless 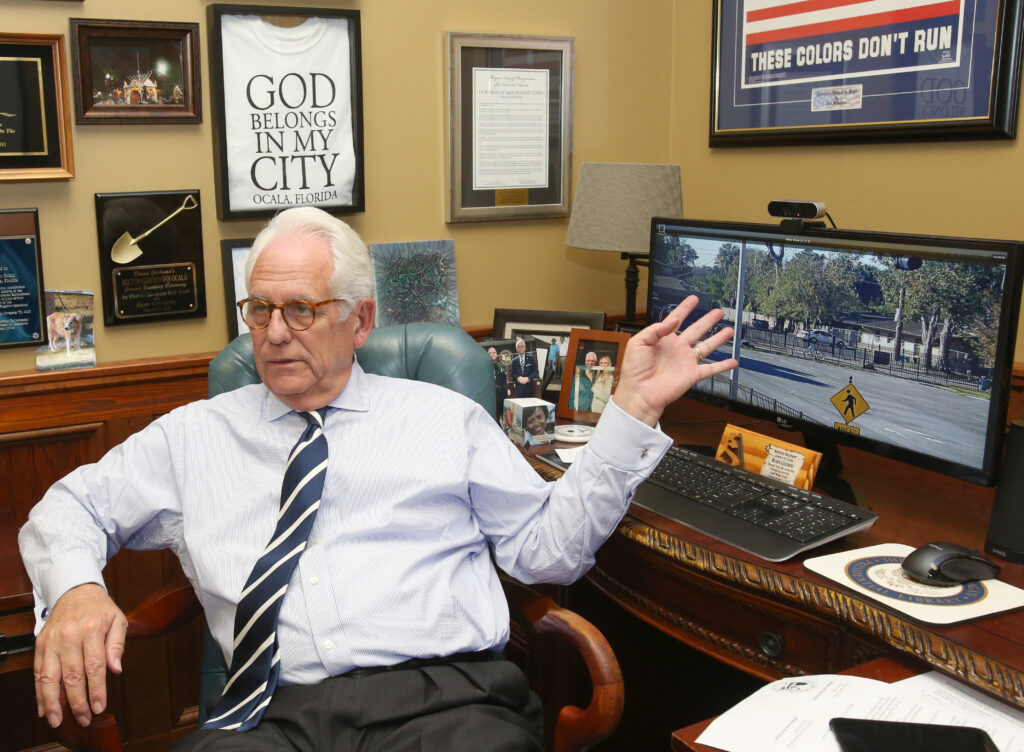 It’s Tuesday, Ocala Mayor Kent Guinn’s birthday, and the mayor can be found this day in his second-floor office in City Hall. One of his desks is cluttered with books, stationery and other paperwork. The other is organized with photos and plaques encircling his computer.

But instead of spending his day indulging in birthday cake, he spends it as he would any other Tuesday in City Hall. Part of that routine means pulling up a live camera feed from the corner of Northwest Third Street and Northwest First Avenue on his desktop.

From this vantage point several blocks away, he watches Ocala’s poor and homeless in real time meander around the popular corner.

“We don’t have a problem, obviously, with people (coming) to eat and leave,” Guinn said. “But they can’t set up shop here and just take over the street and pass out in the street, you know, selling drugs in the street … prostituting themselves. That’s like ground zero for a lot of criminal activity that goes on.”

Guinn has pressed hard for solutions to this problem in his near-decade tenure as Ocala’s mayor. Since 2011, Guinn and the revolving door of Ocala’s councilmembers have thrown solutions at a wall, but have found very few that stick.

In 2017, the Council proposed building a pavilion for the city’s homeless population, giving them the bare necessities, such as a roof over their heads, 15 picnic tables, two shower rooms and two bathrooms.

The pavilion, which was officially referred to as the Pavilion Engagement Center, was slated to cost $508,311 to construct and $80,502 a year to maintain. In the initial proposal, the City of Ocala would provide $400,000 toward construction with grants, while Interfaith Emergency Services would be responsible for the balance.

However, when an amended proposal, which asked the city to pay for the entire project, was presented to the council, the councilmembers backpedaled. 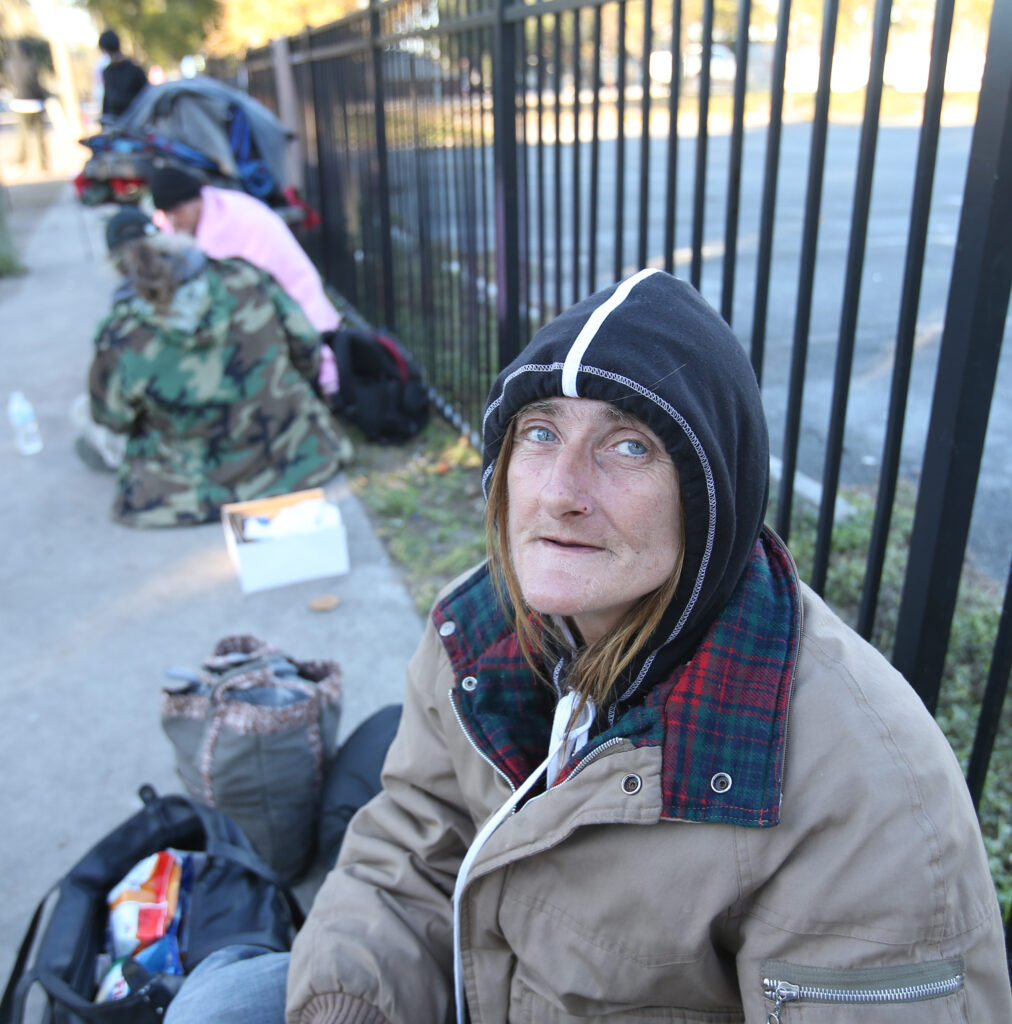 Deborah Slaton, who is homeless, sits on the sidewalk and tries to stay warm near the Salvation Army on Northwest First Avenue in Ocala on Tuesday. [Bruce Ackerman/Ocala Gazette]

“Spend $700,000, 800,000 and take that and put it under a roof,” Guinn said, gesturing to a picture on his phone showing homeless people and their belongings sprawled across the sidewalk. “And continue to do the same thing you’re doing now. That’s a waste of $800,000.”

There is, however, a possible solution in Guinn’s eyes. And it’s not arresting the loiterers, which he has suggested in the past.

Safe Harbor’s facility, which works in cooperation with the Pinellas County Jail, allows for the homeless to seek shelter, where they can sleep on mats, receive three meals a day (only one being hot) and have access to communal bathrooms.

Most importantly, those who seek help at Safe Harbor have access to case managers, employment providers and drug rehabs, if needed.

“So jail costs, according to (Sheriff Billy Woods), like 92 bucks a day,” Guinn said.

Meanwhile, at the time of its opening, Safe Harbor cost $20 per day, per guest.

“I love Safe Harbor,” Interfaith Emergency Services’ Executive Director Karla Grimsley said. “He (Guinn) actually took me down there … I would love for us to have a Safe Harbor here. That would make a huge difference.”

According to Grimsley, who has been with Interfaith for a decade, Marion County has a population of 500-700 homeless people, as defined by the Department of Housing and Urban Development (HUD). However, Grimsley believes that that number is much higher considering HUD doesn’t count those living in shelters, hotels or couch surfing as homeless.

Guinn, despite some reservations, believes that bringing something like Safe Harbor to Ocala is possible.

But Guinn worries many wouldn’t take advantage of a Safe Harbor-styled facility to get their lives on track. 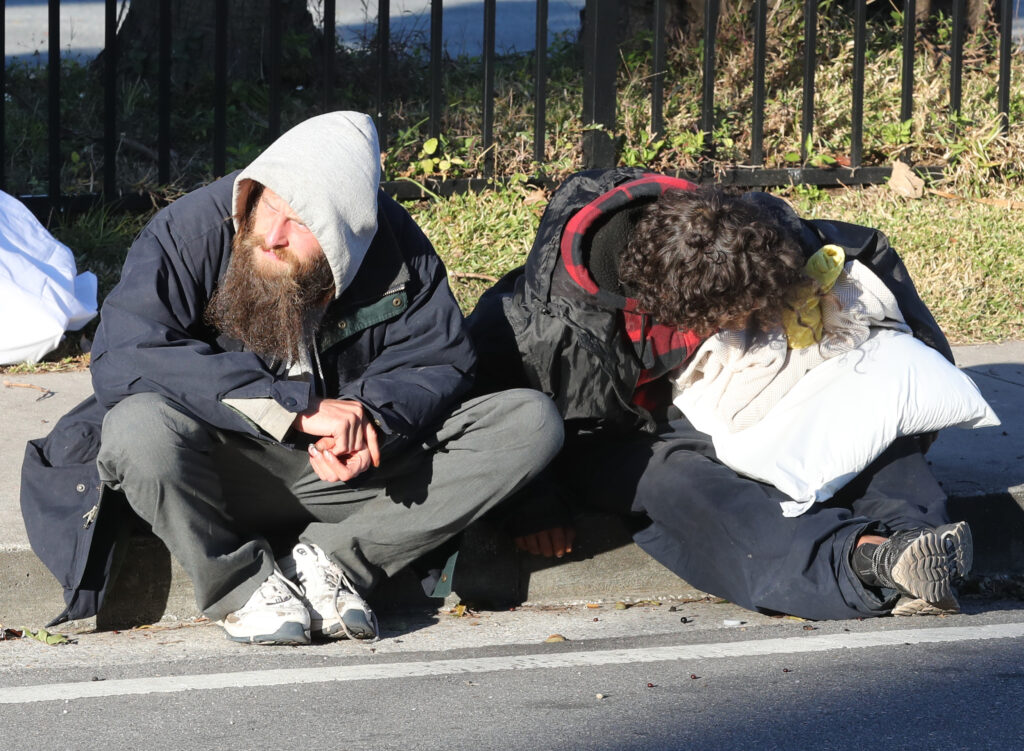 Two unidentified men sit on the sidewalk near the Salvation Army on Northwest Third Street in Ocala on Tuesday. Mayor Kent Guinn is entertaining the idea of a homeless refuge styled after Pinellas County’s Safe Harbor. [Bruce Ackerman/Ocala Gazette]

But Grimsley believes any solution Ocala officials adopt should address the root causes of homelessness.

Changing their life is what Guinn wants to do. Grimsley will tell you, Guinn might know more of Ocala’s homeless population by name than she does.

The solution, however, is far more complex than one could imagine.

If Guinn could one day come to his office, have two clean desks to choose from and spend his day watching YouTube videos, he’d probably do it. But for now, he spends his days flipping through piles of paperwork, turning to his computer and watching one of Ocala’s most complex issues unfold.