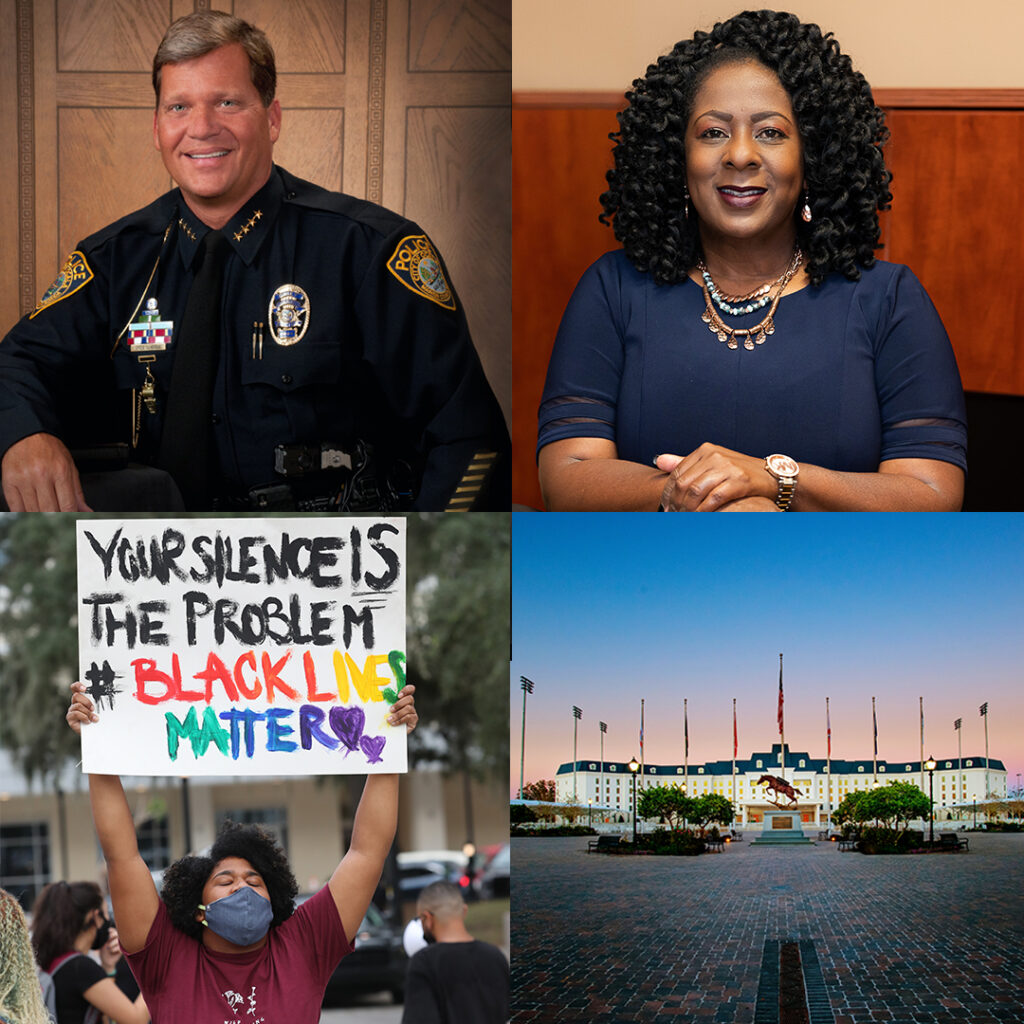 The recent history of the United States is replete with events that caused seismic shifts in our lives, happenings that rattle us to our foundations – the attacks of 9/11 and the subsequent war on terror, for example – or that vaulted us to new heights of human achievement. The moon landing comes to mind.

The COVID-19 outbreak of 2020 seems destined to occupy a morbid place in that pantheon of notable historical moments for its enormous death toll and the sheer breadth of its destruction on our economy, our quality of life and our very sense of well-being.

What makes it the top story in Ocala in 2020 is that, while COVID-19 is a global phenomenon, its effects have spared no one. Every life in Ocala has been altered – some by the crushing loss or hospitalization of a loved one, and others by financial hardships or significant disruptions in our jobs, routines and relationships.

During the early part of 2020, it appeared that Florida in general, and Ocala specifically, would escape the worst ravages of the virus. While urban areas like New York City were erecting makeshift morgues in hospital parking lots to store their dead, just 250 Marion County residents had tested positive for COVID by June 1 and just a small handful had succumbed to the disease.

Suddenly, the social distancing and mask requirements that were already mainstays of life in other parts of the United States began to gain traction here. Social distancing signs and bottles of hand sanitizer became ubiquitous in public places. Hundreds of offices began mandating that employees work from home. Many restaurants and bars yo-yoed back and forth between state-mandated closures and occupancy restrictions. The businesses that didn’t close mandated that customers wear masks. Schools scrambled to salvage the upcoming academic year by offering a hybrid slate of online and in-classroom instruction.

Ocala and Marion County saw a brief, significant downturn in positive cases in late summer before experiencing an uptick again in the fall.

Six months after the virus arrived here in full force, the numbers tell a somber tale in Marion County: 17,000 total positive cases, 1,300 hospitalizations and more than 450 deaths by the final week of the year. 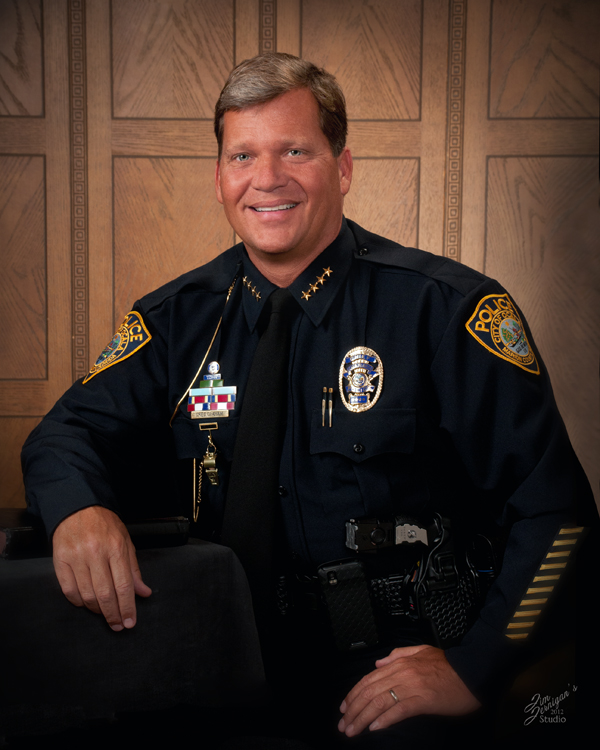 On a perfect Sunday afternoon, in a bucolic grassy meadow on the outskirts of Marion County, Ocala lost a beloved community leader.

A preliminary report from the National Transportation Safety Board indicates that Graham took off around 10:34 that Sunday morning from Back Archers Airport in Belleview and flew over Lake Weir before turning west and heading toward the Marion County Airport, also known as the Dunnellon airport. The plane lost altitude and air speed, then climbed briefly before plummeting into a vacant field.

Investigators have not ruled on the cause of the crash. They reported finding “heavy corrosion” in the bowl and the filter screen of the fuel strainer but gave no indication if this was a contributing factor.

While the cause of the crash is uncertain, the void left by Graham’s death was not.

Except for a four-year stint as chief of the Cedar Rapids, Iowa, Police Department, Graham had spent his entire career in Ocala, working his way up from patrolman and earning a reputation as a fierce crime fighter and caring public servant. 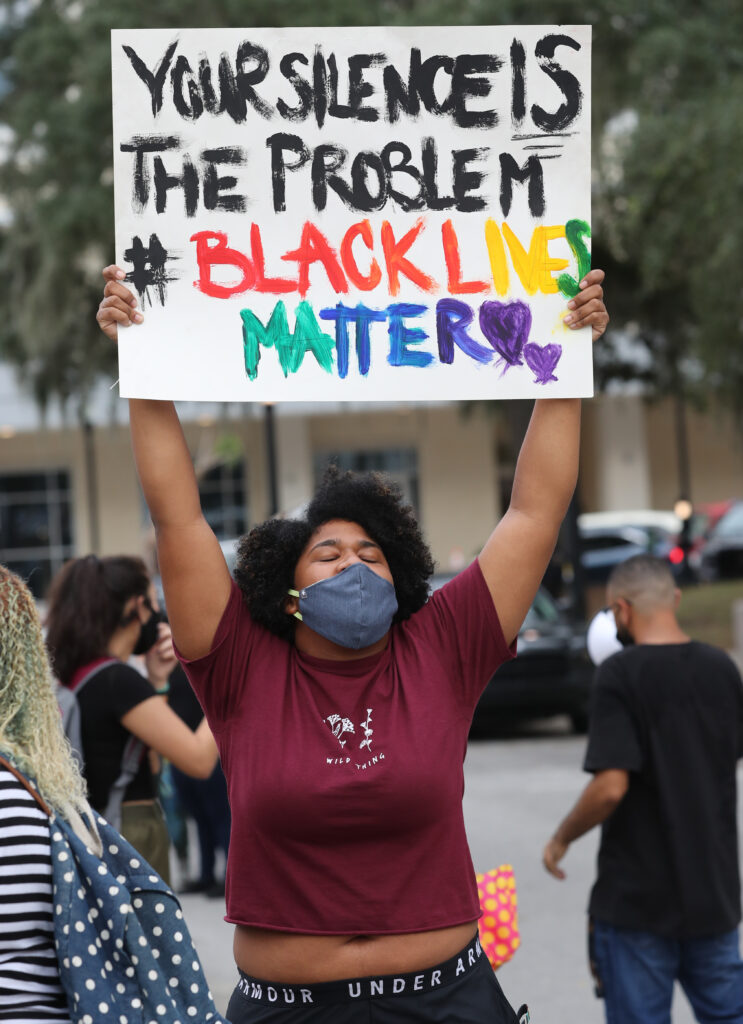 Racial strife was, sadly, a major theme in 2020 as communities around the United States reacted strongly to a series of killings of unarmed black people by police – Rayshard Brooks, George Floyd and Breonna Taylor, to name a few.

The Black Lives Matter movement that grew from these episodes found many supporters in Ocala as well, as citizens took to street corners on a number of occasions to demand police reform on a national level and held at least two rallies to call attention to the deaths.

One of the events on Ocala’s downtown square became tense as supporters of President Donald Trump staged a counter-protest across the street.

At a time when COVID-19 was surging for the second time in late 2020, drug makers Moderna and Pfizer announced that clinical trials of their coronavirus vaccines were yielding remarkable results and that the vaccines could be ready for public use by the end of the year.

Ocala began receiving shipments of the vaccines in December to administer to front-line healthcare workers and those in nursing homes and other long-term care facilities, where COVID-19 was taking its worst toll. Next in line are people 65 and older and, eventually, the general public.

The World (Equestrian Center) is ours 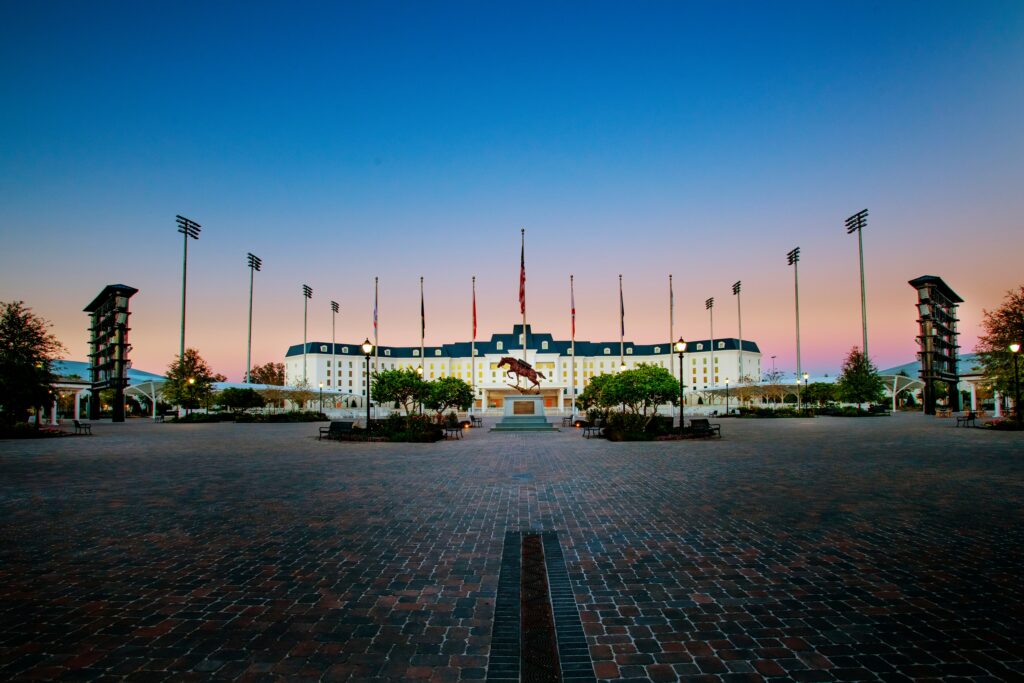 Dozens of area dignitaries got their first formal look in early December at the majestic World Equestrian Center, weeks before the sprawling horse and entertainment complex opened to the public. The facility, the centerpiece of which is its stunning five-story hotel Equestrian Hotel, also features the 8,000-seat Hunterland Stadium, four climate-controlled indoor arenas and 22 outdoor rings designed for equine events, as well as five expo centers capable of hosting sporting events, conventions, trade shows, car shows, dog and other animal shows or party rentals.

Although the new World Equestrian Center was created to be the largest horse show complex in the country, the Roberts family who built it envision it as much more than a haven for horses and their owners.

“We want to be everybody’s place,” Roby Roberts said in an interview in early December. “It’s so broad. I think we’re more than a horse show facility; I think we’re like a city that’s going to host so many different things.” 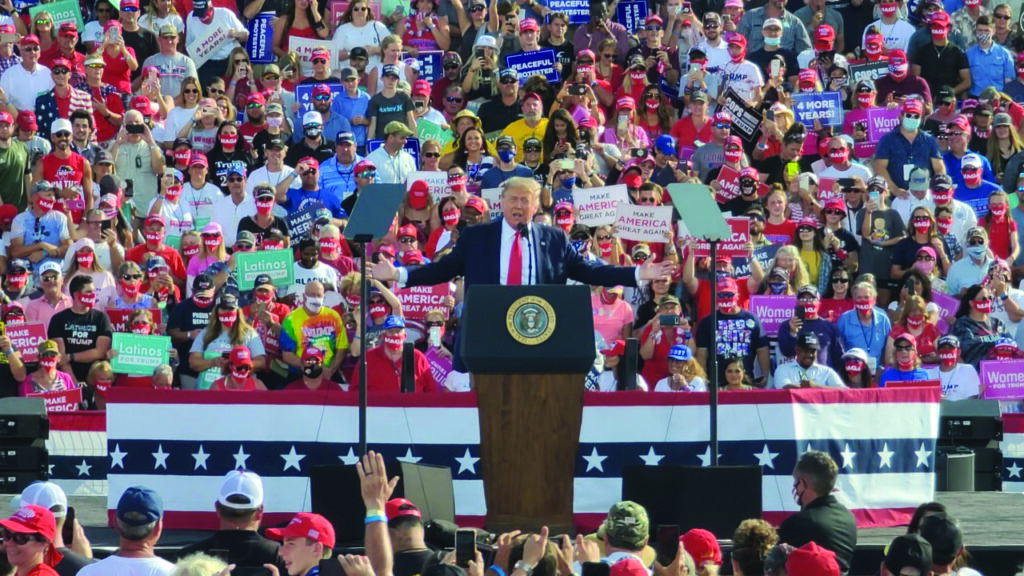 The bitter divide between Republicans and Democrats, between progressives and conservatives, was on full display back in October when President Donald Trump flew into Ocala for a campaign rally.

Fresh off a bout with COVID-19, the 74-year-old president displayed no aftereffects and spent nearly two hours on a hot fall afternoon attacking his Democratic rival and the media, pumping up his record, and promising supporters, as is his trademark, to make America great again if given another four years in the White House.

Surrounded by thousands of boisterous, mostly red-clad adorers, Trump took shots at Democratic nominee Joe Biden and warned of dark days ahead should the voters reject a second term for the incumbent.

“I will deliver opportunity, optimism and hope,” Trump told the crowd to raucous applause. “Biden will deliver poverty, pessimism and decline.

As expected, Trump overwhelmed Biden in Marion County, which traditionally votes heavily Republican. The president claimed 62 percent of the popular vote and won 105 of 122 voting precincts.

The fight over masks

As the number of positive COVID-19 cases exploded in Ocala in July, nearly 700 Marion County medical professionals signed a petition to city and county governing boards seeking ordinances that require masks be worn much of the time to stem the growing incidence of COVID-19 in our community.

The Ocala City Council took up the proposal in late July and after nearly three hours of public testimony and heated debate narrowly rejected a proposed mandate requiring that masks be worn in all indoor settings and outdoors when social distancing is not possible.

The council actually voted 3-2 for the mandate, but because the proposal was brought before the council as an “emergency” ordinance by Council Matt Wardell, the city charter requires four of the five council votes to be enacted.

The ordinance got a second hearing in August and was approved by the City Council before Mayor Kent Guinn vetoed it. Guinn cited problems with enforcing the law, including churches in the law as “business establishments” and potential meddling with the privacy of people who claim a health-condition exemption to masking.

The council overturned the veto 4-1, with council President Jay Musleh dissenting. But the majority recognized the unpopularity of much of its language revised the ordinance. It has been extended twice since then, including once in December.

The ordinance does not punish anyone for not wearing a mask, but it does encourage mask usage.

It has been five years since FedEx broke ground on its Ocala facility with the promise that the project would springboard the area to being a major logistics hub. Since then, Ocala has become home to a long list of distribution and shipping facilities that have brought thousands of above-average-paying jobs to our community.

That trend continued in a big way in 2020 when Dollar Tree committed to building 1.8 million-square feet of space and Amazon 617,000 square feet. They join a long list of national companies that had existing or have located logistics operations in Ocala, including FedEx, Chewy, AutoZone, Cheney Brothers, R&L Trucking, Cone Distributing, McLane, National Parts Depot, Transformco and Tri-Eagle.

Kevin Sheilley, CEO/president of the Ocala/Marion County Chamber & Economic Partnership, said the lure for these companies is Ocala’s central location in Florida. Sheilley noted that Ocala is strategically located halfway between Miami and Atlanta, midway between Tampa and Jacksonville and serves a driving distance population – 39 million – that is greater than the I-4 corridor through Central Florida.

Moreover, he said, operating costs in Ocala are 28 percent lower than the rest of Florida and labor costs are 7 percent lower. 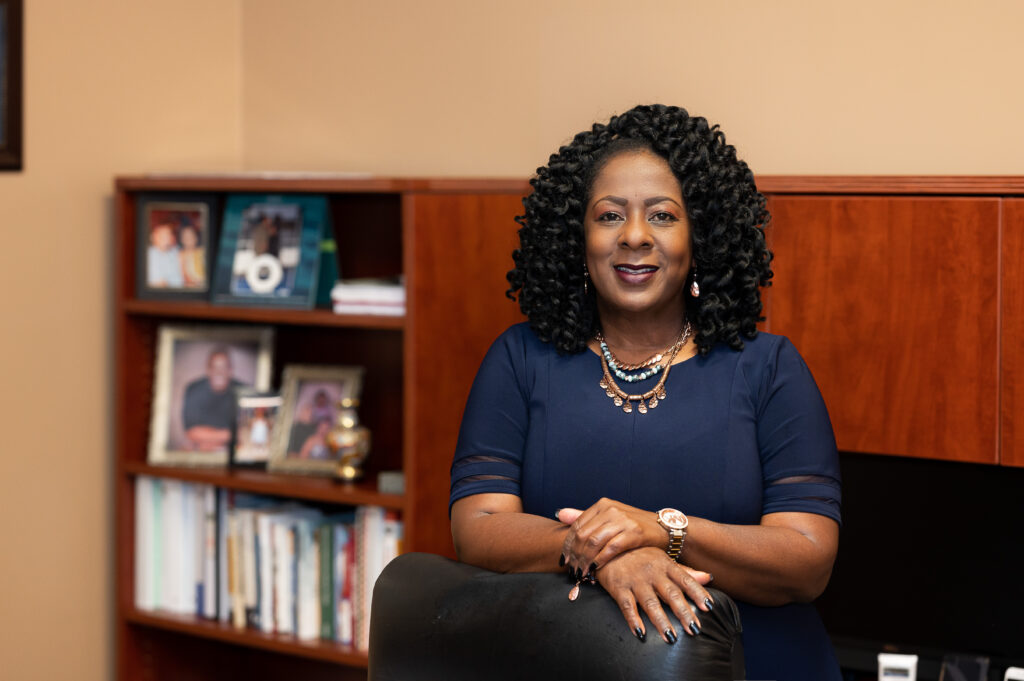 Sandra Wilson made history in June when she became the first African American to be named city manager in Ocala.

Wilson, a 20-year veteran of City Hall, was named city manager by the Ocala City Council on June 2, after serving as interim in the post for six months. She succeeded John Zobler, who abruptly resigned late in 2019 after a half decade marked by significant progress in the city, particularly downtown. Wilson served as Zobler’s No. 2 for most of his tenure.

Wilson came aboard during a challenging time, just as the coronavirus pandemic was beginning to grip Ocala and a month after a court ruled that the city’s fire fee was unconstitutional and ordered the city to reimburse those who had paid it.

She had some immediate successes as well, continuing work on the Mary Sue Rich Community Center on the city’s westside and debuting the first-responder campus on Martin Luther King Jr. Avenue (the third such facility). 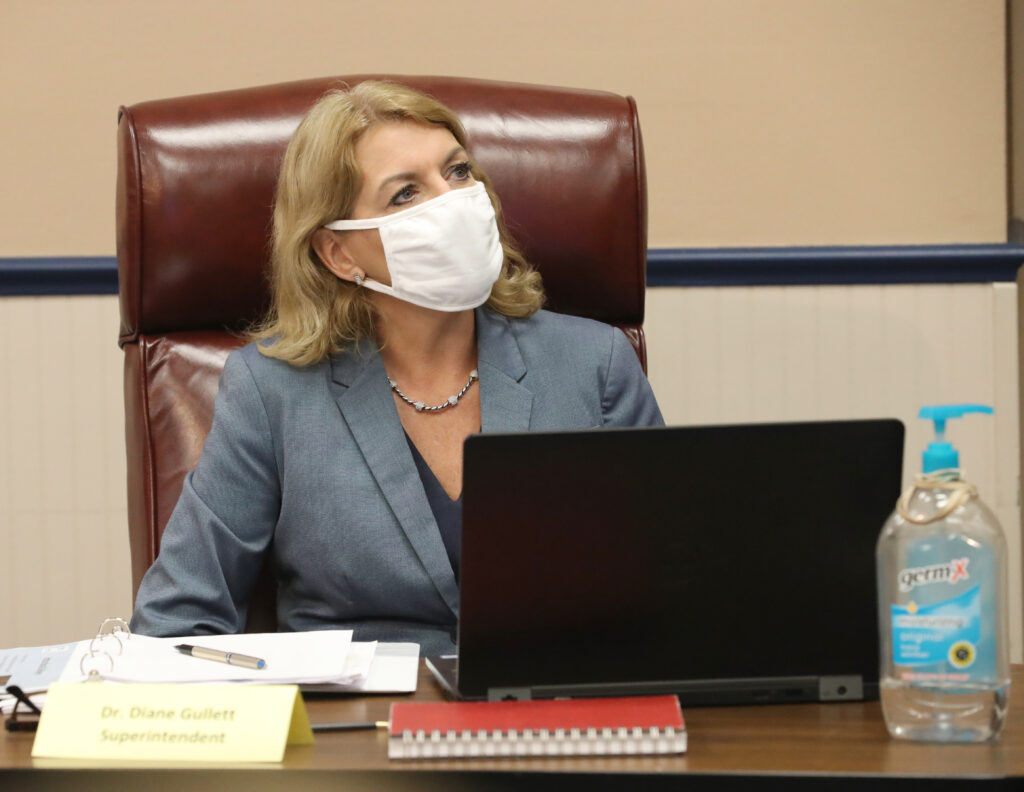 Diane Gullett started work as Marion County’s new superintendent of schools – its first-ever appointed superintendent – on July 1, just as those who now work for her were finalizing a plan for re-opening local schools on Aug. 10.

And like Ocala City Manager Sandra Wilson, she took the reins at a time of great uncertainty in the school system, due in large part to COVID-19.

A University of Florida graduate, Gullet said her top priorities coming in were to create better communications, both inside and outside of the school system; elevate the image of the school district; and improving the district’s underperforming schools.

Gullett replaced Dr. Heidi Maier, who was elected to the post in 2016. Until now, Marion County’s superintendents of schools were elected every four years. But Marion voters decided in 2018 to begin allowing the School Board to appoint the school superintendent instead.