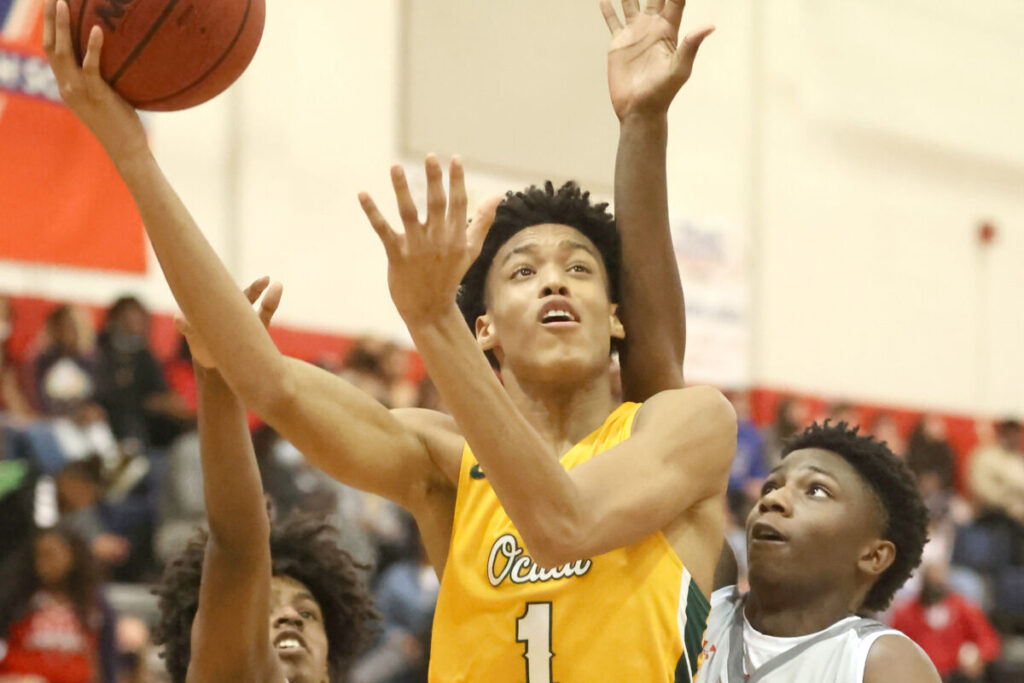 While sold-out sporting events have been one of the coronavirus pandemic’s many victims, Friday night’s boy’s basketball game against the Vanguard Knights and Forest Wildcats hosted a near-standing room only crowd.

And with the two programs’ storied rivalry, it came by no surprise that Vanguard staff members had to turn away late-arriving spectators. 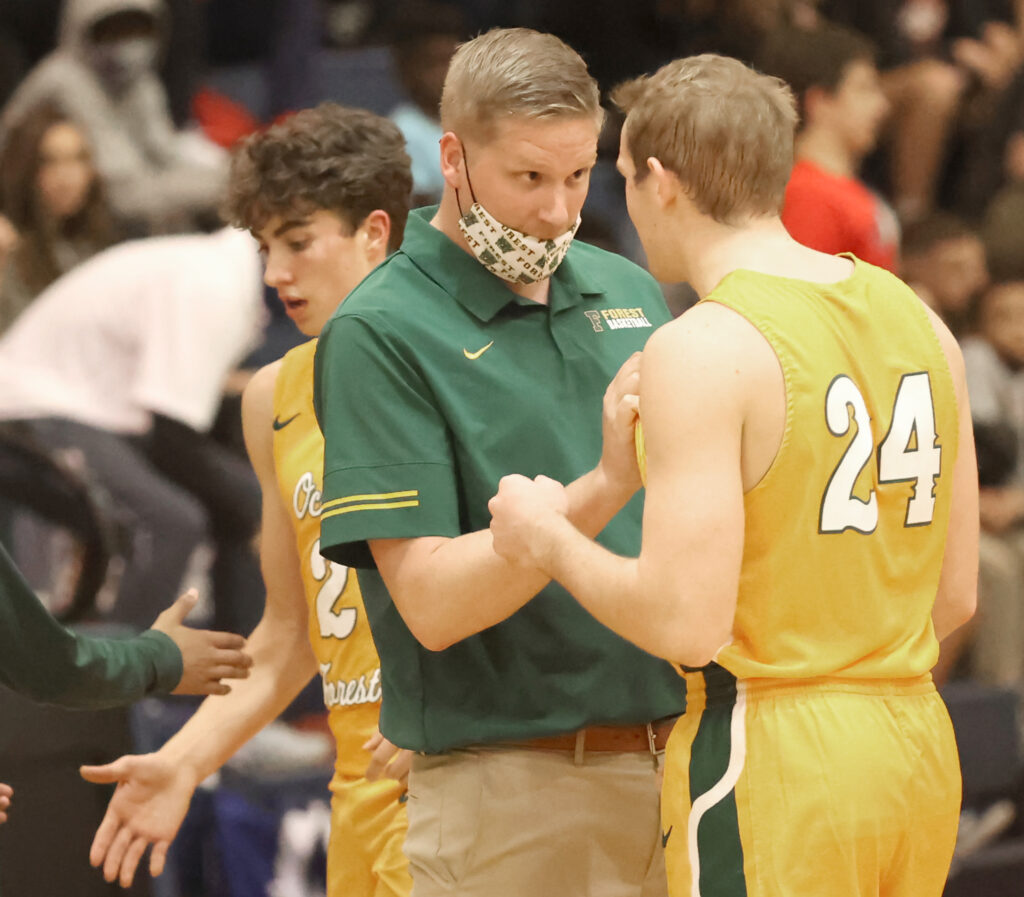 Many of those fortunate enough to cheer on their team did so behind a mask. However, policing mask-wearing and social distancing became less of a priority as the game progressed.

“It was good to see people with their mask on,” Forest head coach Spencer Ashley said of the atmosphere. “We gotta keep doing that. We gotta make sure that we keep following rules and for the most part, both sides did really good. But it was good. Our students got to see it, our families got to see it… It was just a little bit of normalcy, but a good night.”

By final whistle, the fans that Forest brought with them would also agree that it was a good night.

In a contest that saw both rosters battle in-game injuries, the visiting Wildcats topped the Knights 60-46 on Friday night.

“It really hurt us. It hurt our depth big time,” Ashley said of losing Stephan.

Paired with Stephan’s injury, the Wildcats also battled foul trouble, which forced Forest’s 6-foot-8 junior Elijah Russell to watch from the bench until the second half. 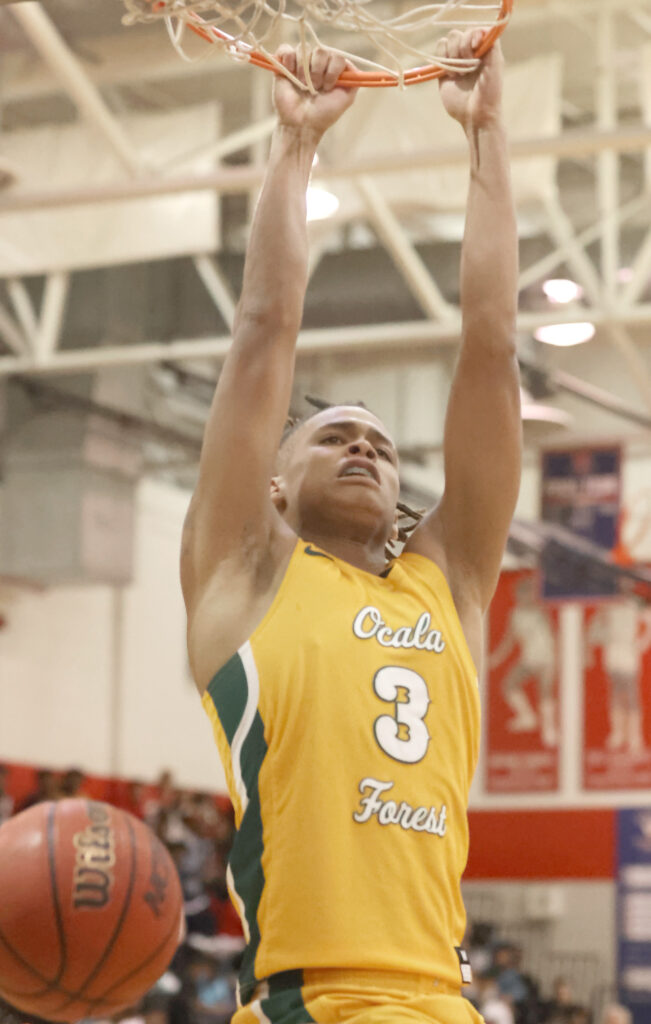 Forest’s Elijah Russell (3) hangs on the rim as he dunks on Vanguard during a basketball game at Vanguard High School in Ocala, Fla. on Friday, Jan. 8, 2021. Forest won the game 60-46. [Bruce Ackerman/Ocala Gazette] 2021.

“We’re a big team and we lost two post players early,” Ashley said. “So we kinda had to change the way we played.”

Out of the break, the Wildcats returned some of their size when Elijah Russell came off of the bench. And to the bustling crowd’s delight, Forest’s lengthy roster made noise at the rim behind a slam dunk from junior Brenen Lorient, followed by an alley-oop from Lorient to Elijah Russell.

Forest’s 18-point third quarter, paired with the Knights’ leading scorer going down with an injury spelled trouble for Vanguard.

After stumbling into the bleachers during a play, James briefly exited the game with an injury. However, the senior guard wasn’t gone long.

“He’s the leader of our team,” Vanguard head coach Todd Davis said. “He didn’t want to go out like that right there. Especially against Forest. So he came back and showed us that grit and resiliency of being a senior and wanting to go out on top.” 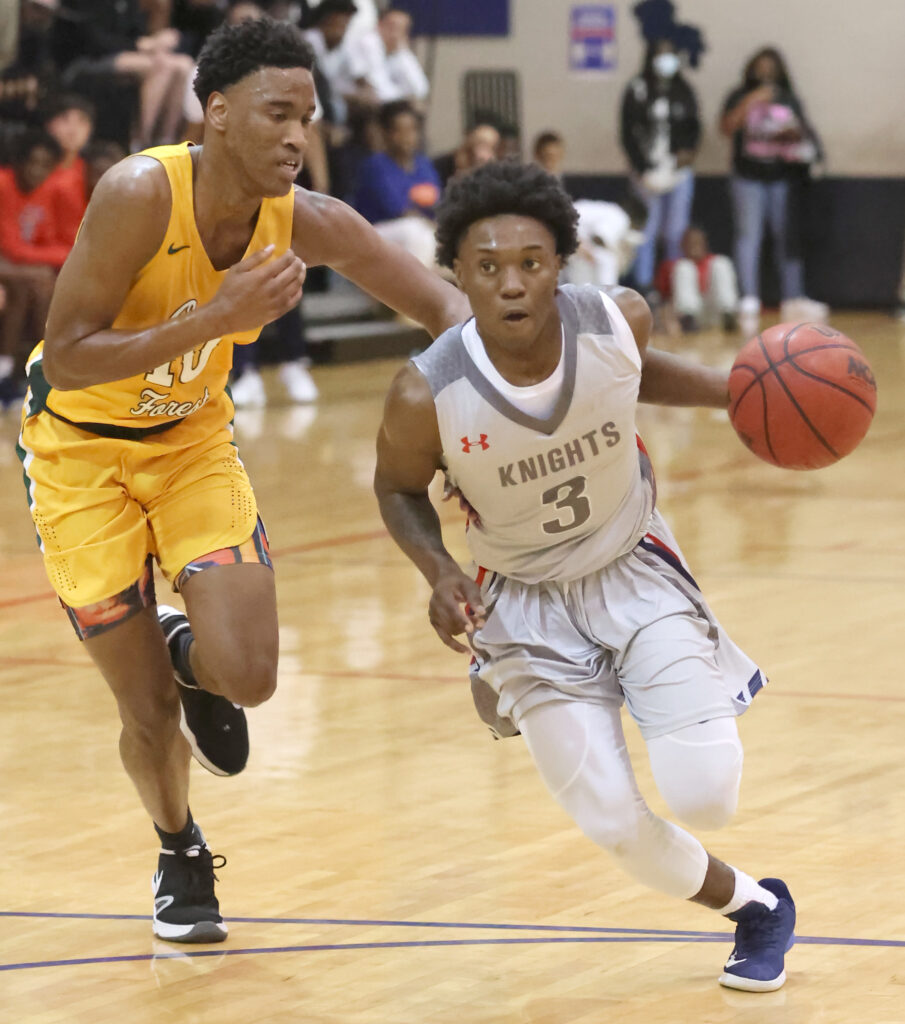 James would finish the night with a team-high of 15 points, while junior Demetrius Watts added eight points of his own.

Despite only leading by three heading into the final quarter, the Wildcats finally found separation from the Knights down the stretch behind three balls from junior Jeremiah Russell and freshman X’Zavion McCoy.

“He brings the energy every single night,” Ashley said of the young McCoy. “He always has energy and he never gets tired.”

Leading Forest’s offensive efforts in the win were Elijah Russell with 14 points and Lorient with 11.