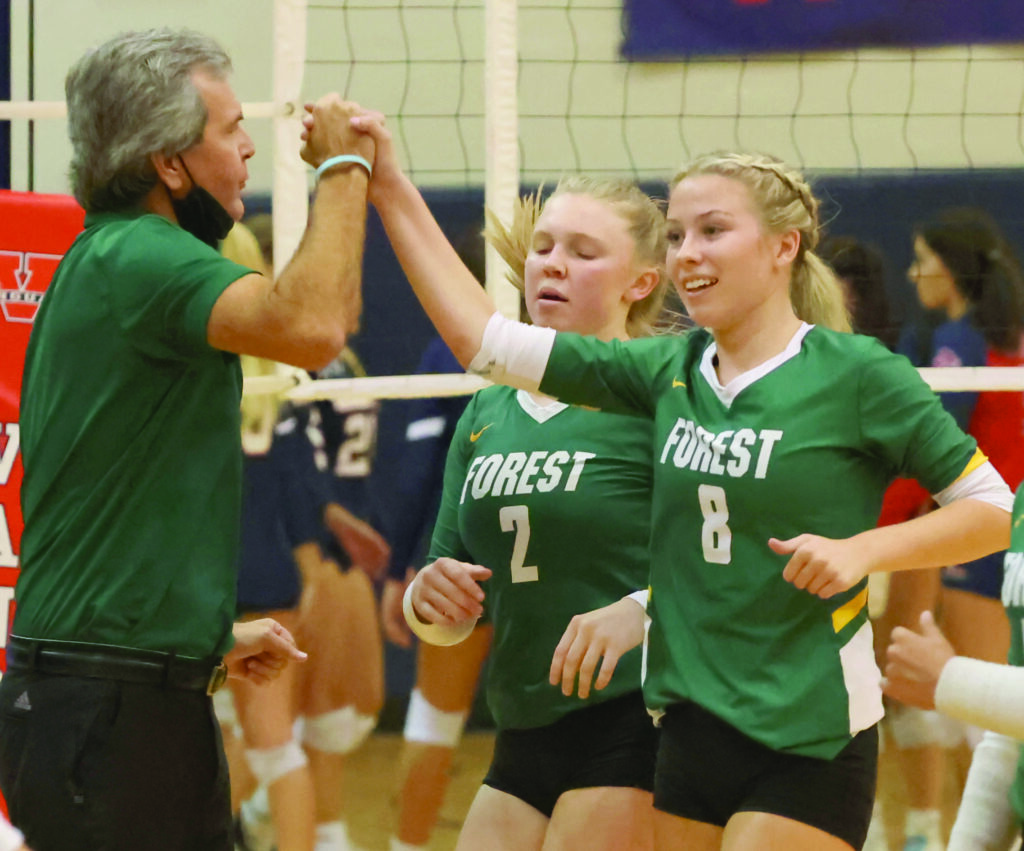 Forest’s coach Jimmy Collins celebrates with Aubrey O’Cull (2) and Sheridan Turner (8) as they leave the floor for a time out against Vanguard during a volleyball match at Vanguard High School in Ocala.

Entering the final week of high school volleyball, the No. 1 and 2 spots within the MCAIC appear to be clinched, with Forest remaining undefeated following a win over North Marion on Tuesday, and Vanguard having only suffered losses to Forest. Bringing up the middle are North Marion, West Port and Belleview, with Dunnellon and Lake Weir trailing behind.

Here’s what is coming up for teams this week:

Belleview (3-5):  Belleview will try to build on their straight-sets win over Lake Weir on Monday, but will have their work cut out for them against Forest on Thursday and Vanguard next Tuesday. “Our season had a rough start. We have had some growing pains, but every new team has that. We have all the pieces we need and are working on making those pieces work together. We have a solid team and we showed that against Lake Weir yesterday,” stated Head Coach Lindsay Seek.

The Rattlers will complete the 2020 season with an away game against North Marion next Thursday, Oct. 8.  Although Belleview walked away with a loss in their first meeting with North Marion, it was close at 3-2. If the lady Rattlers play consistently, they have the ability to end 2020 with a win.

Dunnellon (1-8):  2020 has been a tough season for the lady Tigers. Suffering a grueling loss to Forest on Monday, Dunnellon faces another difficult challenge on Thursday versus Vanguard.  They will then play at North Marion on Tuesday, Oct. 6, and finish the season with a home game against West Port on Oct. 8.

As the only undefeated team in the MCAIC, Forest is the indisputable first-place team.  After beating Dunnellon on Monday, the Wildcats notched their ninth win of the season against North Marion on Tuesday.  Barring a major upset, it appears the lady Wildcats will finish the 2020 season undefeated, with their final opponents being Belleview (Oct. 1), West Port (Oct. 6) and Lake Weir (Oct. 8).  Reflecting on the season and what awaits postseason play, Head Coach Jimmy Collins stated, “With the impact of COVID-19 we knew getting into the season that our schedule would not be as competitive as past years.  My philosophy has always been to play as difficult a schedule as possible to be best prepared for districts. Forest has always been part of a very difficult district. But I told our team before the season we will not use our less-than-competitive schedule as an excuse. We have made our practices as competitive as possible. Our first goal was not to lose a set to any of the county schools. We still have the opportunity to reach that goal. Our next goal was to win the district tournament. That is still our goal.”

Lake Weir (1-9):  Similar to Dunnellon, the ladies from Lake Weir have struggled this year. Recently outmatched in shutouts against North Marion on Sept. 24 and Belleview this past Monday, and West Port on Tuesday, the Hurricanes will not likely get any reprieve to end their 2020 season when they face Vanguard on Thursday and Forest a week later.

North Marion (5-4): Currently hanging in the middle of the pack of Marion County teams, although enduring a loss on Tuesday to Forest, the North Marion Colts, with their win over Lake Weir on Sept. 24, have the opportunity to finish strong with games against West Port Thursday, Dunnellon Oct. 6, and Belleview Oct. 8. The Colts should be able to finish the season with a record of 8-4 if they play to their potential.

Vanguard (8-2): Having already faced rival and conference powerhouse Forest, the Knights look to finish the 2020 season with a four-game winning streak. After beating West Port on Monday and Dunnellon on Tuesday, they hope to make it three in a row against Lake Weir on Thursday and beat Belleview on Tuesday. If Vanguard is able to use these final weeks to improve their consistency, they have the ability to do well in the post-season.  Head Coach, Luis Perez confirmed, “We know our mental game must be better, smarter, and stronger to be able to beat teams like Forest High. We have the tools and potential and just need to put the pieces together. We are still trying to find a way to be better together as a team and we will continue working towards that.  Our focus now is to get to the end of the state series.  We know that as a young team we will have to work harder to click sooner as a team and fight for a spot for the state title.”

West Port (5-4): Having been at 500, the Wolf Pack chalked up a win on Tuesday against Lake Weir and should be able to put another “W” on the board against Dunnellon on Oct. 8.  That being said, games against North Marion on Thursday and Forest next Tuesday will likely leave them finishing 2020 at 500.

Looking at the private schools, Trinity Catholic, while suffering some early season losses has turned it around with a 5 game winning streak.  Following wins against Berkeley Prep (9/29) and Oak Hall (9/30), resulting in a current record of 6-3, TC will have their work cut out for them as they face, Santa Fe Wednesday, Oct. 7 and Riverview Thursday, Oct. 8. Both of which currently have winning records.

Ocala Christian (1-6) was defeated by Meadowbrook 3 sets to 0 on Tuesday and will complete their season with an away game against Wildwood.  In their first game of the season, the Crusaders lost to Wildwood 3-2 but look to avenge that loss Thursday to end the 2020 season.

With a current record of 11-2, the lady Saints of St. John played Redeemer Christian on Tuesday and walked away with a victory. They have two tough bouts ahead – on Thursday against Newberry, whose current record is 11-3, and in their final game of the season against Bell (13-3) on Tuesday, Oct. 6.