Who will stay perfect? 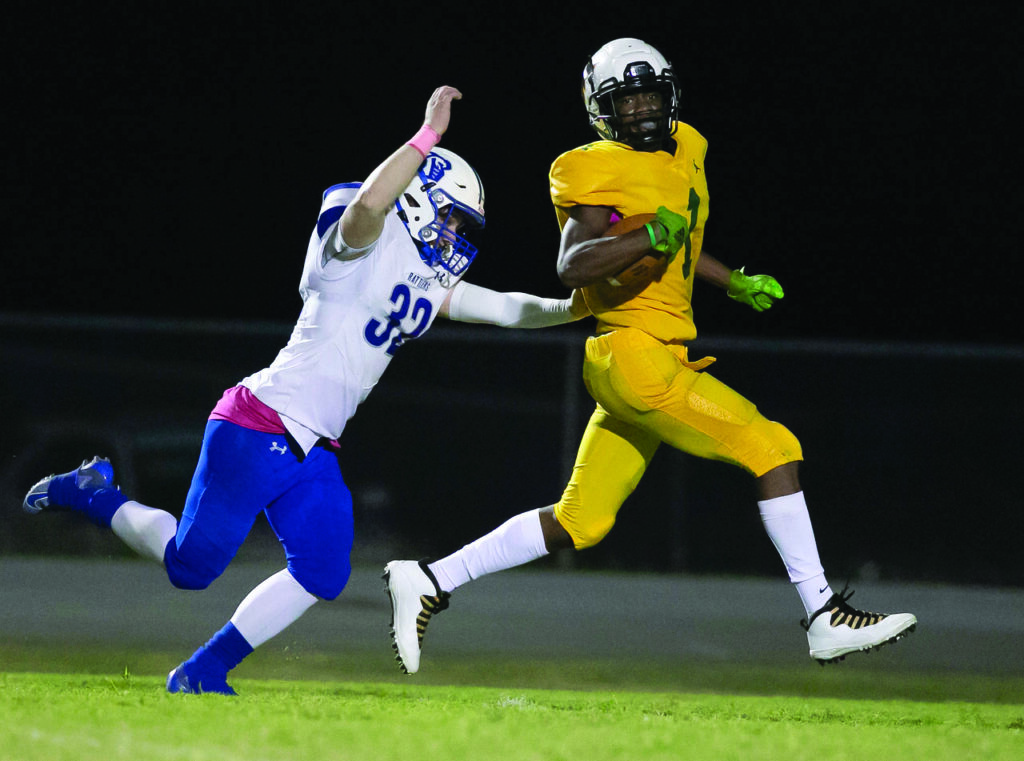 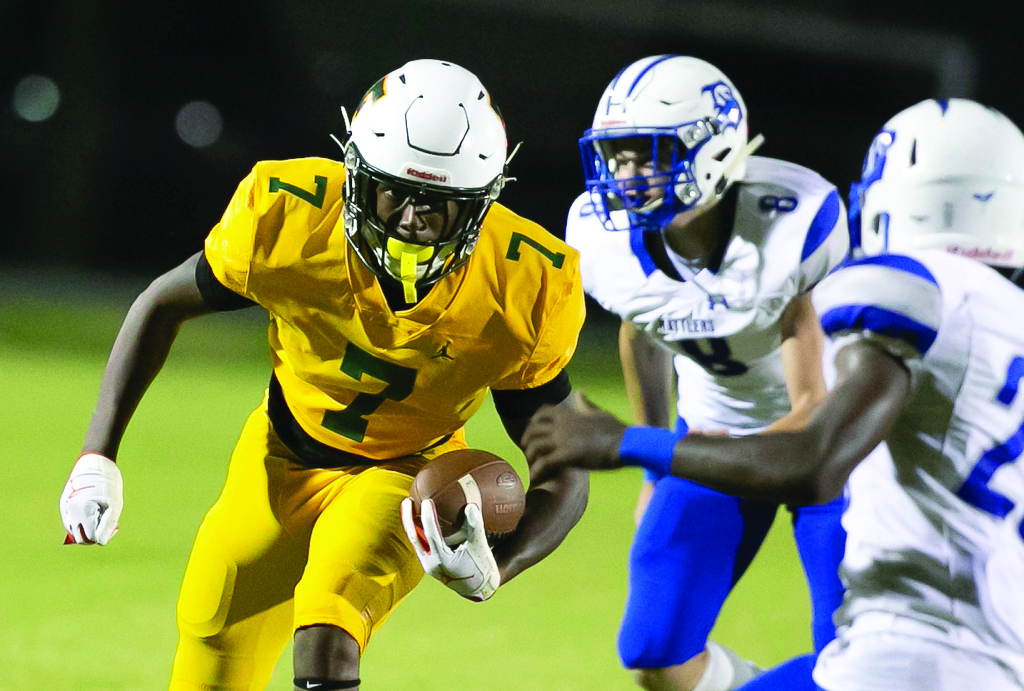 They are two teams headed in opposite directions. The Vanguard Knights remain undefeated after pounding the winless North Marion Colts, 33-7.

And a week off did not slow Forest High School’s momentum as the Wildcats blanked the Belleview Rattlers 42-0. As a result, Belleview has yet to put a W in the win column.

Meanwhile, West Port, having only lost to powerhouse Vanguard to date, battered Lake Weir by a final score of 34-0.

Vanguard’s win sets up a battle of unbeatens when the Knights take on Dunnellon this week.

Here is a look at all last week’s action.

Facing off against North Marion, unbeaten Vanguard jumped out to an early lead on a masterful kick return by Mykell Randall.

Vanguard’s defense throughout the game dominated with multiple interceptions on the night, including one by Tryin Wilson.

Trying to make up lost ground, North Marion took a gamble and threw deep, but an outstretched Emile Sancho came down with an acrobatic interception for Vanguard.

Following a third interception by Sergio Gunsby, the Knights continued with the momentum, with a hand off to Dewhitt Betterson, Jr. from quarterback Alexander Law.  Betterson ran 44 yards to put an additional six up for the Knights.

North Marion answered with a touchdown and extra point in the second quarter, but that was all the Colts could muster. From halftime on, Vanguard dominated the game, putting up 19 unanswered points. The 33-7 win moved the Knights to 3-0, while North Marion continues to tread in unfamiliar water with a record of 0-4.

Coming off a tough loss to Vanguard and using their bye week to recompose themselves, Forest crushed Belleview 42-0.

Forest’s passing game was too much for Belleview, rolling up 229 yards in the air on the night.  Quarterback Stephen Curry, Jr. led the way with 188 yards and Izaiah Guy contributed an additional 41 yards. Guy also led the team in receiving with 140 yards.

As the Wildcats had such untamed success with their passing game, they weren’t forced to run the ball much, which was reflective in the 66 total rushing yards.

On the defensive side of the ball, Forest had 51 total tackles, which were spread evenly across the board.

With only 10 receiving yards and 22 rushing yards on the night, Belleview’s defense was put to the test as Forest’s offense owned the clock.

Forest moves to 2-1, with their only loss being at the hands of Vanguard. Belleview falls to a disappointing 0-4.

Coming in with a gaudy 3-1 record, the Wolf Pack were more than prepared for the 1-2 Lake Weir Hurricanes.

Entering the second quarter down by seven, Lake Weir looked to come alive with a 12-yard run by quarterback Ernest Flythe on third and long for the first. But they were unable to capitalize and West Port took over on downs.

Throughout the game, West Port was able to rely on their running game, with running back Elijah Hopkins leading the charge with 12 carries for 203 yards and two touchdowns.  Hopkins continues to produce and leave no question as to why he is currently heavily recruited by Division-I schools.

On the defensive side of the ball, left tackle Brayden Ramey had a stellar game and continues to improve from week to week.

“I felt the kids finally played a complete game with still a partial team due to COVID-19,” head coach Steve Rhem said. “We should have everyone healthy this week for our matchup against Forest. Can’t wait.”

Although Lake Weir continued to move the ball throughout the game, they were unable to put points on the board and in the end met their demise with a final score of 34-0. 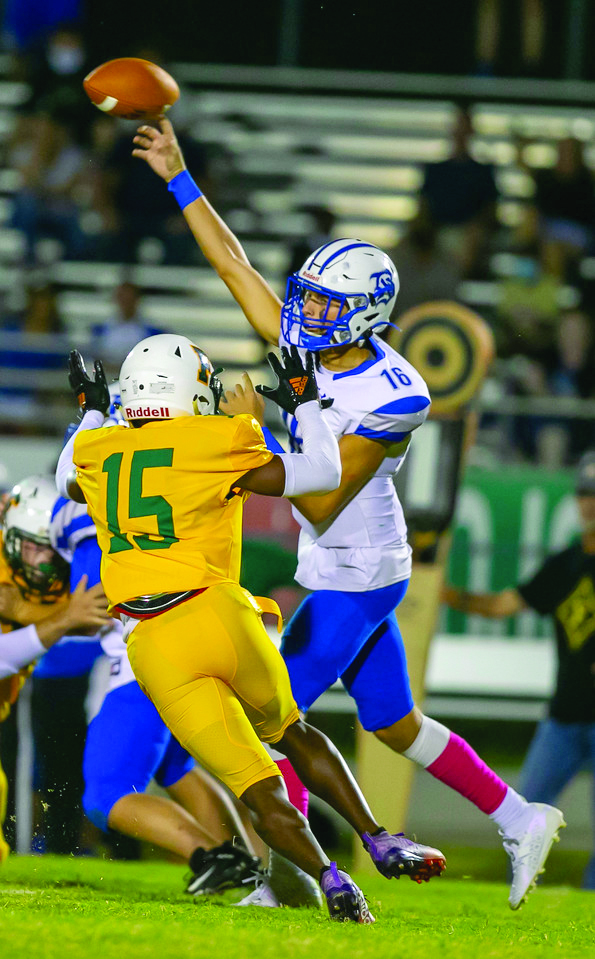 And then there were two.

Vanguard travels to southwest Marion County to take on Dunnellon in a battle of undefeated teams to determine the No. 1 team in the county after five weeks.

While Vanguard and Dunnellon fight for the top position, West Port and Forest will square off in what should be a close game as they both have only one loss at the hands of Vanguard. West Port will have homefield advantage.

North Marion will travel to Lake Weir to take on the Hurricanes in hopes of putting a hashmark in the win column.  As both teams endured troubling losses last week, each will look to turn the tide and walk away with a much-needed win.

Belleview, meanwhile, will use its bye week to rest their defense and try to find some offensive momentum.

With a frustrating first quarter that resulted in Sandalwood scoring 14 unanswered points, Trinity Catholic was forced to play catchup for the remainder of the game.  Scoring seven in the second quarter, they entered the second half down 14-7. After a scoreless third quarter, the Celtics fought hard and put another seven on the board in the fourth quarter, but Sandalwood was able to drive home a late field goal for a 17-14 victory.

TC travels to Lakeland this Friday to take on Victory Christian Academy.  With a current record of 2-3, Trinity hopes to move to .500 with a win over VCA, which comes in with a 4-2 record.

Coming off a win against First Academy, Ocala Christian Academy hoped to add another W to their record. However, Seven Rivers had another outcome in mind and toppled OCA with a landslide win at 50-12.

The loss leaves OCA with a record of 1-5 going into a matchup Wednesday night with Faith Christian.

The 2020 season has been daunting for the boys of St. John. They have struggled with numbers and have only been able to play two games. Able to assemble 13 players for Oct. 16, St. John was able to take the field against Halifax Academy but were overwhelmed, 54-19.

Unfortunately, St. John had to forfeit their next game, to Seven Rivers on Oct. 20, which ended their 2020 season.