Who is in the box? 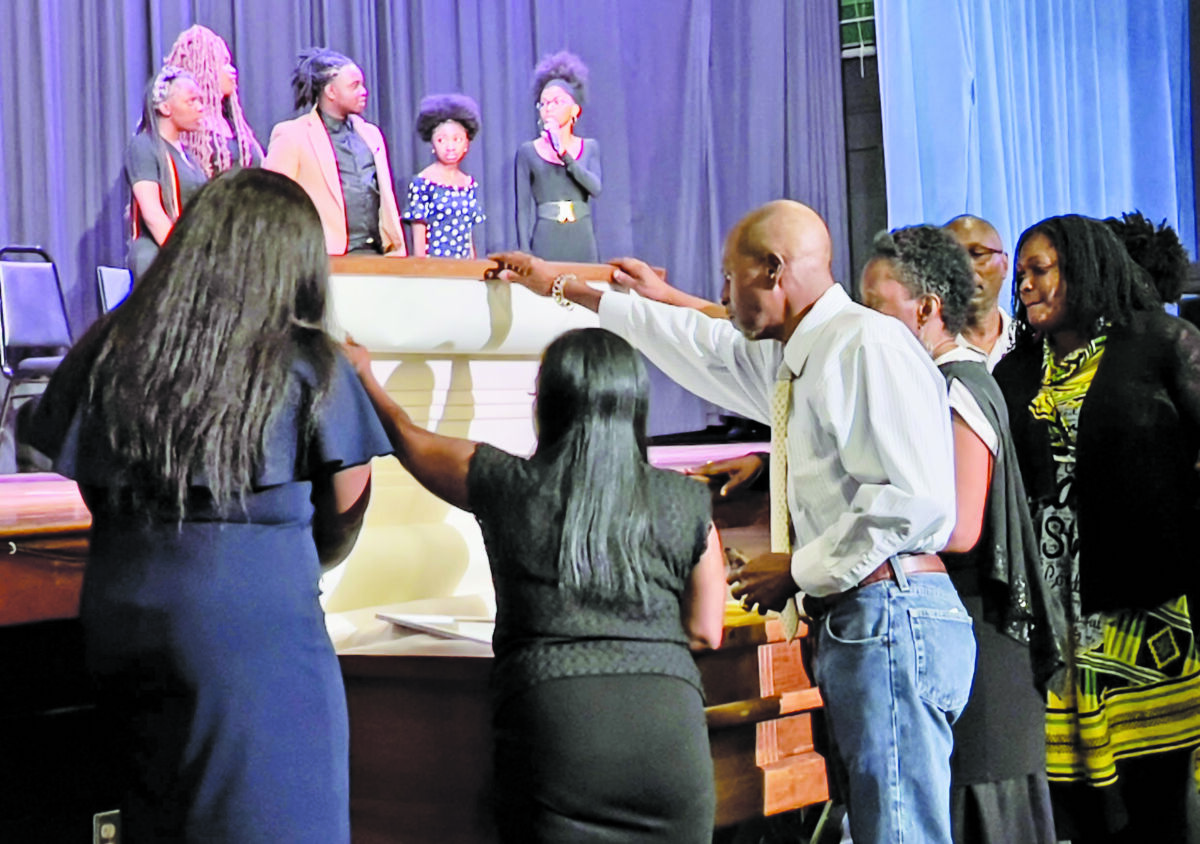 A visibly depressed high school student, hunched over in a hoodie, gets mercilessly teased by peers for his unfashionable attire. One day, he has had enough and fatally shoots one of the offending students point blank.

Convicted as an adult, the young felon soon realizes the consequences of his crime; his pain compounded by the broken hearts of loved ones — most notably the tears of two mothers, the victim’s and his own.

While this scene played out during the first act of “Who’s in the Box?” — a dramatization performed by the actors and singers of Gainesville’s Star Center Theatre — similar youth shootings have continued to trouble Ocala neighborhoods and communities across the nation.

On June 3, a 14-year-old was shot outside Laurel Park Apartments. Statistics estimate that up to 50 percent of shootings go unreported.

Bishop Christopher Stokes, the co-creator of the “Who’s in the Box?” chooses not to focus on the gun safety debate. He’s more concerned with preventing tragic outcomes and returning communities to villages of extended family support, a founding philosophy of two Gainesville-area outreach hubs: One Community Church and the Willie Mae Stokes Community Center, named in Bishop Stokes’ mother’s honor.

“I have really been focused on one just the whole prevention aspect,” Bishop Stokes said.

“My fight is to stop these young people from killing each other. Yes, we can ask them to put down the guns, but what happens if we don’t offer them something to pick up to replace it? That’s where we are now, returning to the village concept, where everybody is there for everybody.”

“Who’s in the Box?” was first staged in Gainesville in January. Bishop Stokes teamed up with author and playwright Romona Jackson to create the production concept, which includes law enforcement, local government, youth and other stakeholders in the community.

“I wanted to really show the life of what a single mom really goes through,” Jackson told the “Gazette.” “When you’re in the ministry like I am, you hear so many different stories and you hear so many different testimonies. I wanted to depict what was being reflected in the community. Moms are trying to be the mother and the father, and kids are trying to fight for respect because they’re either being bullied or they’re trying to be a part of the in-crowd, and, ultimately, they choose the gun as the loudest, deadliest way to get respect.”

Word of mouth about “Who’s in the Box?” made its way south to Ocala, where Community Liaison Coordinator Tara Woods teamed up with Ocala Police Chief Mike Balken and Bishop Stokes to figure out how to present the multifaceted, interactive production locally.

City Council President Ire Bethea joined the effort and chaired the “Who’s in the Box?” committee. The group of stakeholders met weekly over the course of the past few months.

“We are seriously hoping that quite a few people got something out of the production,” Bethea said. “This is not a one-time-and-done deal thing. We definitely will be meeting in about a week. We’re gonna critique the outcome and where we go from here.”

Bethea and his cohorts’ efforts culminated in an impactful performance at the Tech Institute on June 23. The audience of youth and adults of all ages and backgrounds showed up during a severe thunderstorm to attend the event. Members of the audience appeared to be moved by the performances and talks despite some audio glitches. 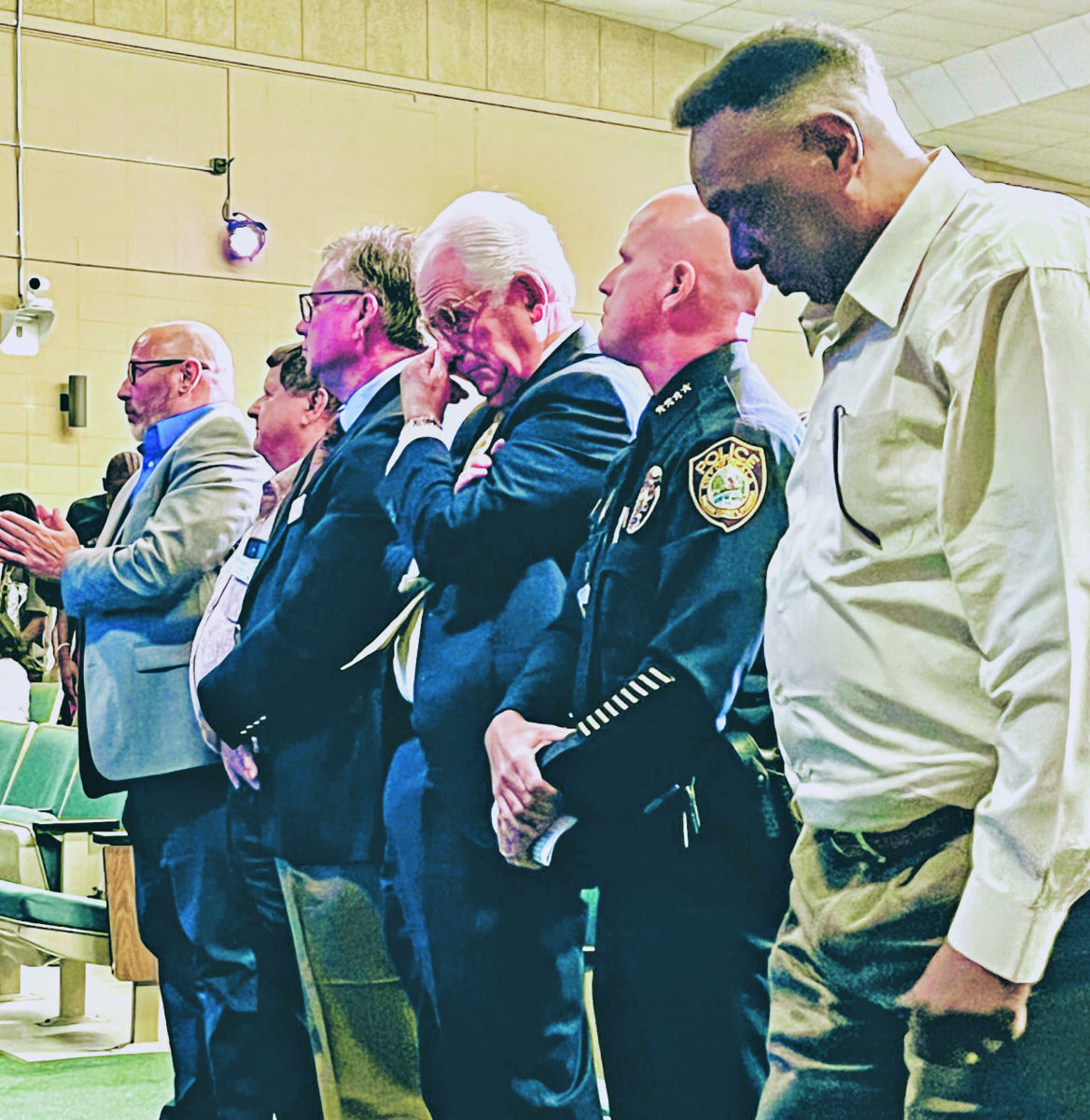 Powerful, wrenching vocal performances from the actors who played the mothers in the show, Tradina L Thomas and Stephanie McCray, highlighted the dramatization.

The event featured two acts. Act I was the dramatization of a shooting based on real-life events. Act II comprised spirited sermons by Bishop Stokes and Pastor Jamie Pullings of Ocala’s Welcome Stranger Missionary Baptist Church.

In attendance were a procession of local law enforcement officers. Ocala-based nonprofits engaged youth and adults in the lobby, providing information on jobs, services and other outreach, and SunTran busses brought in youth and families from throughout the city. Marion County Schools collaborated to bring the performance’s message to pupils and parents.

A mock funeral procession during the conclusion of Act II, invited everyone in the audience to look inside a casket in front of the stage, where a mirror was propped in place of a body.

“In all of society today, people are hands-off, and I mean that literally and figuratively,” Bethea added. (Imitating an angry parent) ‘You don’t say, my kid did that …’ but as far as the message to put the guns down in “Who’s in the Box?,” I think it was outstanding. I think that there were a lot of people who saw some things close to the casket. They were looking away.”

Bethea’s sentiment reflects the theme of Bishop Stokes and Rev. Pullings’ sermons. Both religious leaders asked the crowd, “Who’s in the box?” and responded, “We’re in the box.” They wanted to drive home that youth shootings aren’t “their problem” but “our problem,” and one day it could be one of us in the casket as a result of community gun crime.

Teens 13 and older, who live in areas determined to be “at-risk” made up the youth contingent. The two-hour presentation also involved Marion County Children’s Alliance and the Public Policy Institute.

“This is just the beginning,” Bethea said of the collaboration. “This doesn’t end here.”