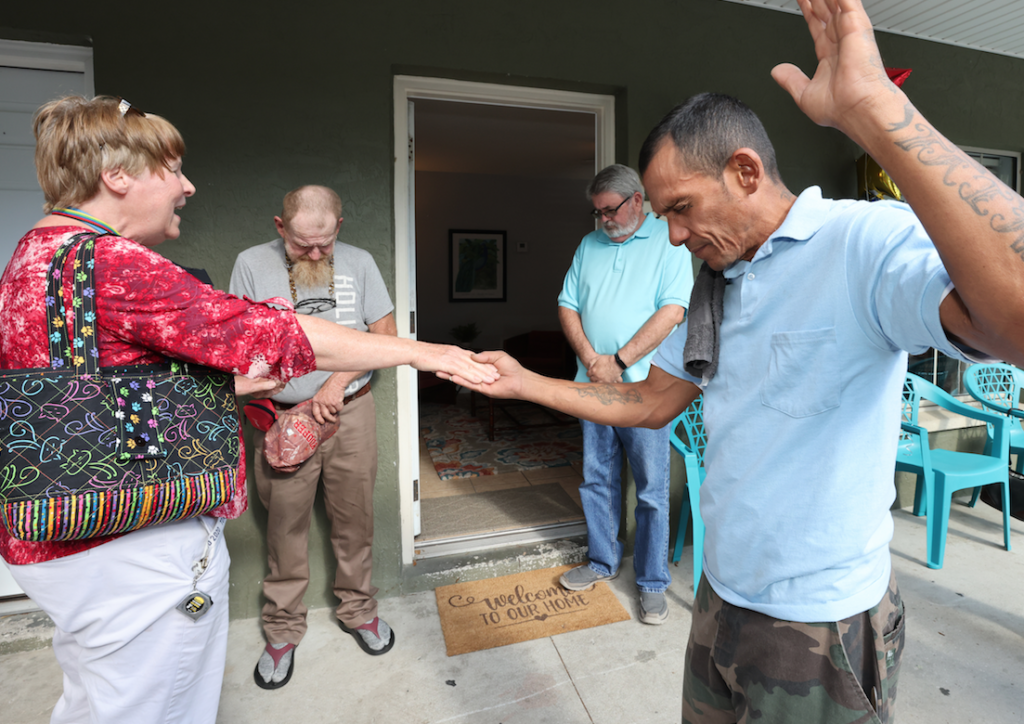 Pastor JoAnne Dyson of the Fort King Presbyterian Church, left, prays with James “Red” Sanborn, second from left, and Jose Sambo, right, both formerly homeless men who are being helped by Interfaith Emergency Services, as church member Steve Layendecker, prays with them, as the men move into in their newly renovated apartment at the Interfaith 14th Street Apartments in Ocala, Fla. on Monday, April 4, 2022. [Bruce Ackerman/Ocala Gazette]

One of the first things James “Red” Sanborn did after entering his new home was take off his shoes and sigh, as if exhaling some of the weight from the last 20 years of his life.

“It’s been a long time. Plus, my feet were killing me,” said Sanborn, 55, with a smile from his new bedroom, painted a glowing peach—a color he said he chose for its warmth.

After nearly two decades without a home, Sanborn finally moved into his newly renovated duplex on Monday, April 4, along with roommate, Jose Sambo.

The two formally homeless men were surrounded by many in the Interfaith Emergency Services family, as well as other supportive friends and donors, celebrating move-in day with pizza, balloons, ice cream cake and more than a few joyful tears.

“I’m just so happy for Red and Jose,” said Interfaith CEO Karla Grimsley-Greenway. “They both deserve this beautiful home and a second chance at a better life.”

Interfaith purchased the 14-unit complex off Northeast 14th Street in Ocala late last year with the goal of establishing at least five units for Permanent Support Housing (PSH). Along with wrap-around client services, PSH provides staff on site to help chronically homeless individuals who can’t effectively live on their own thrive with assistance.

Sanborn and Sambo are the first two people to move into a PSH unit at the Interfaith apartment complex, but several more pairings will be moving in over the next few weeks, said Grimsley-Greenway.

Originally from Puerto Rico, Sambo has lived in Ocala for the last 12 years and has been homeless for the last two. He equated the experience of moving into his new home as fresh affirmation that every struggle he has ever had in life was worth it.

Each one, he said, taught him to appreciate the present.

“God made me go through some things I think so I can be blessed now,” said Sambo. “He listened to my prayer, ‘cause I’ve been asking for a place for so long, and here we go. Finally. My prayer was answered 100%.”

Suddenly emotional, Sambo said he was relieved to no longer have to worry about sleeping in the rain, in the cold and heat, being bitten by mosquitos every night.

Nor would he have to suffer the unique weather of indignities society can sometimes heap on the chronically homeless found along its edges.

“I’m not going to have to go through people throwing coffee on me anymore, calling me names,” Sambo said. “I’m a person again.”

According to Grimsley-Greenway, local churches have played a pivotal role in supporting Interfaith’s PSH program, comprising a network of funding to help sponsor each unit.

She added that the strong showing of support from the faith-based organizations in Ocala doesn’t surprise her at all.

“The churches we work with are always very eager to do what they can and have supported Interfaith for a long time,” she said. “They’ve known of this need for a long time and have all been really amazing throughout the process.” 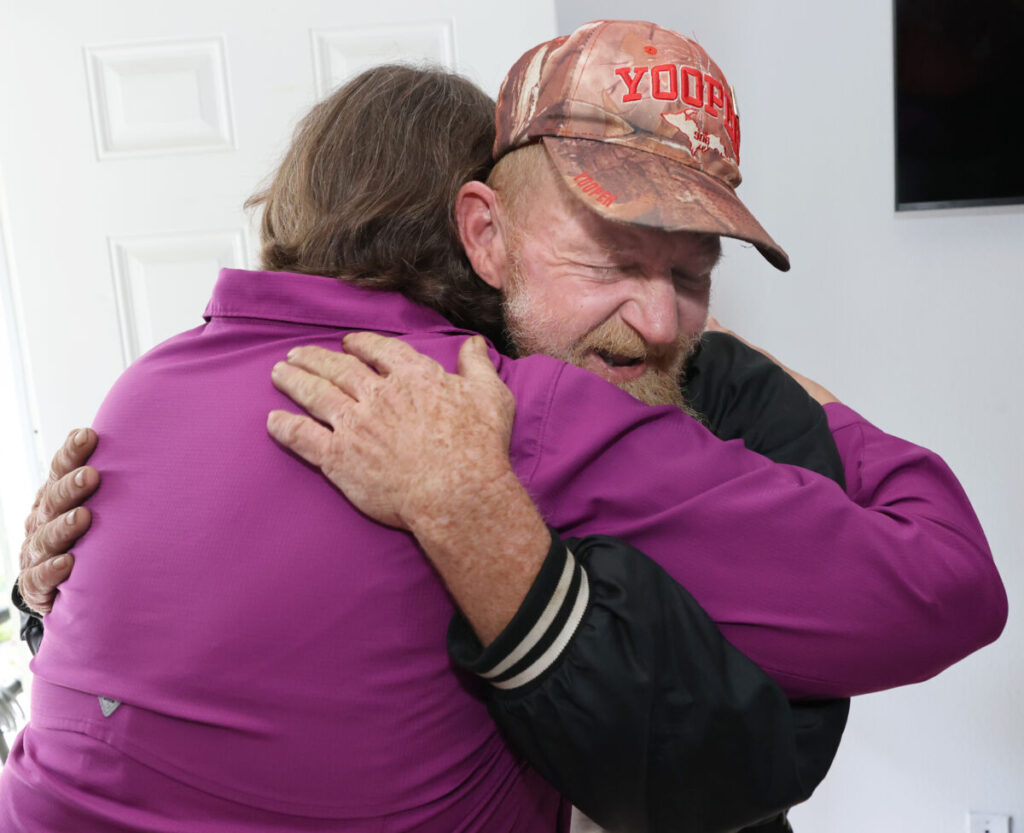 Fort King Presbyterian Church, St. Paul’s United Methodist Church of Ocala, Meadowbrook Church and Church of Hope, to name but a few, have all made adopted units in the complex, according to Grimsley-Greenway.

JoAnne Dyson, pastor at Fort King Presbyterian Church, who was present at Monday’s move-in, said she and her congregation first heard about sponsoring units in Interfaith’s apartment complex back in December.

“We spent about an hour talking about it,” recalled Dyson of her congregation. “It met with 100% approval and we jumped right into it the project.”

Finally seeing the two men come home on Monday was emotional for Dyson, who admitted to choking up on several occasions.

“It think it’s just such a beautiful thing that has been done for them,” she said.

Sanborn, who, along with Sambo, works at Interfaith during the day, explained that his progress from the streets to his new home and life could be expressed quite simply: he kept to the right path.

He hopes that advice helps others realize the same dream.

“They’re trying to help you,” Sanborn said of Interfaith. “So don’t have second thoughts about it. They’re putting in their time, so you got to show them you’re worth it. I owe them all so much for what they’ve done for me.”

“They’re part of the community now,” she said, “living in a home just like everybody else—just your average neighbor. And it’s about time.”