Tubers flocked to Rainbow River in 2020 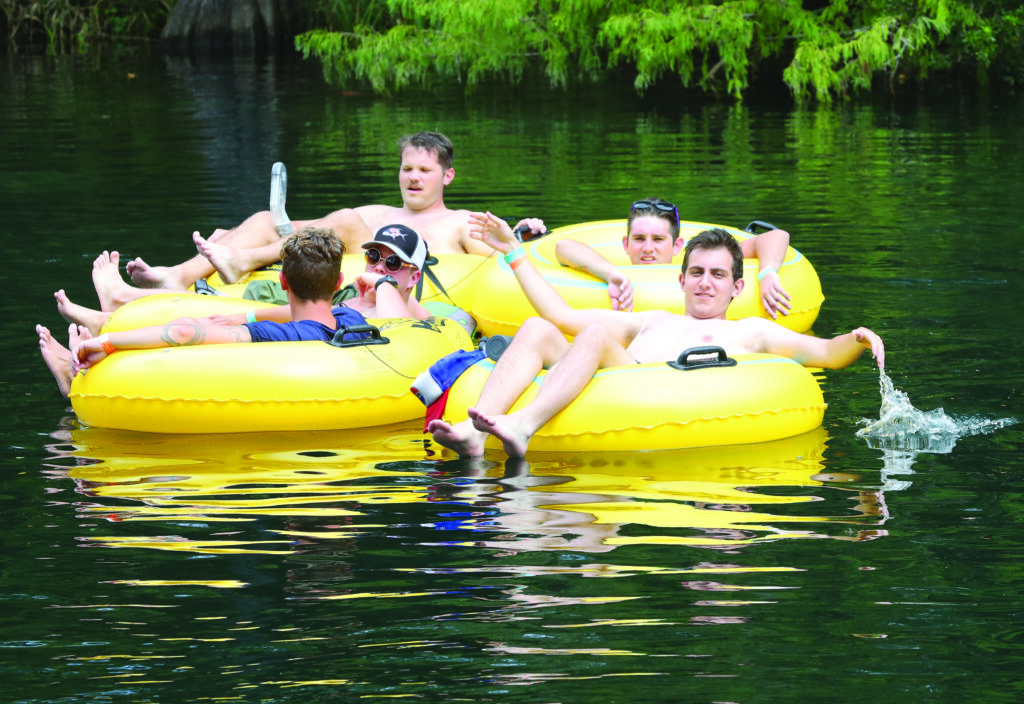 COVID-19 has wrecked much of the economy this year in Marion County and in communities across the nation.

But part of county government’s revenue stream experienced a rising tide during 2020, not in spite of the coronavirus, but perhaps because of it.

KP Hole, the county park at the headwaters of the Rainbow River in Dunnellon, reported a remarkable and unexpected revenue boost this summer.

According to Parks and Recreation Department Director Jim Couillard, the county took in $980,800 this year from its water-sports business at the park, a key staple of which is the tuber rental and shuttle program.

That was up 6.4 percent over the $921,500 the county generated at the park last year, Couillard said.

“It’s been a banner year for us at KP Hole. We’ve exceeded all our goals, even with COVID,” Couillard said.

For years KP Hole has offered folks around the region a refreshing and lazy recreational escape.

Park visitors can rent an inflatable tube at the park and float down the Rainbow River, exiting the waterway four hours later at Blue Run Park of Dunnellon, where they are carted via shuttle back to KP Hole. The whole package, including entry into the park, costs just $25.

But earlier in the year, COVID’s tightening grip on the public consciousness threatened to strangle the county’s chances for significant success at the park.

Couillard noted that KP Hole, along with the rest of the county park system, was shuttered for a few weeks in the spring to comply with directives on public gatherings.

But as the spring went on, Gov. Ron DeSantis loosened such restrictions, and suddenly public health authorities were touting outdoor recreation as a way to blunt the effects of the virus.

“Anything on the water was just slam-packed,” Couillard said.

In Dunnellon, other factors aided KP Hole’s success this summer.

For example, the county, encouraged by Dunnellon city officials, cracked down on a tubing contractor who was not complying with county regulations.

The county also banned people from bringing their own tubes into the park, Couillard said.

Such floatation devices are often cheaply made and cannot withstand the whole trip down river. Deflated and discarded, they create a garbage headache for the county. Additionally, their owners end up stranded in the middle of the trip and either need to be rescued or trespass on the docks or in the yards of waterfront homeowners.

“I took a lot of flak for that,” Couillard said of the ban. “People were pretty upset about that. But at the end of the day, it boosted our business.”

Dunnellon police Chief Mike McQuaig said he was surprised that the county was able to make extra money this year because of COVID.

Yet he appreciated the county’s responsiveness in addressing the problematic tuber population, especially during the pandemic.

At one point, Couillard said, the number of daily tubers on the river peaked at 1,100.

To clamp down on the effects of COVID, the county capped tube rentals at 325 a day, and pledged to the city that would remain the max.

McQuaig, in turn, said that helped the city emphasize COVID-related social distancing measures and control crowds at the Blue Run exit and along the river generally.

“Spacing tubers out worked well,” said McQuaig, who could not recall receiving a single complaint from an irate homeowner all summer. In fact, people were calling with compliments, he added.

“People along the river are happy. The City Council is happy. And I’m happy because I don’t have as many calls,” said McQuaig. “It’s really nice to have a partner you can talk to, put a plan together with, and stick to it.”

Because of the ceiling on rentals, many KP Hole visitors prioritized getting to the park early, Couillard said.

That helped revive a long dormant VIP program, whereby people could pay extra to reserve a parking space at the park. That alone brought in $10,640 this year, Couillard said.

Reducing the tube traffic also meant that other types of users, such as kayakers and paddleboarders, flocked to the river, he said.

Beyond that, Couillard added, the county benefited from fairer than expected weather over Dunnellon this year, as well as the COVID-related adjustments to the school calendar that kept kids out of the classroom longer.

“This summer seemed like the endless summer,” Couillard said.

County Commissioner Kathy Bryant, whose district includes KP Hole, said she was pleased with how the summer went at the park, and not just because of the additional revenue.

“The operational changes we made were not to generate more revenue, but they were to make for a safer experience for all users,” Bryant said.

“At the end of the day, this has become a better operational model. It goes hand-in-hand with the safety plan that we put together last year. It makes all the shareholders happy. And it makes for a better experience for all the disciplines by not having one discipline dominate so much,” meaning a reduction in the tuber population helps kayakers, paddleboarders, divers, boaters and swimmers.

Couillard acknowledges things could change if the coronavirus is soon tamed.

“This might not be sustainable. Or this might be the new normal. Time will tell,” he said.