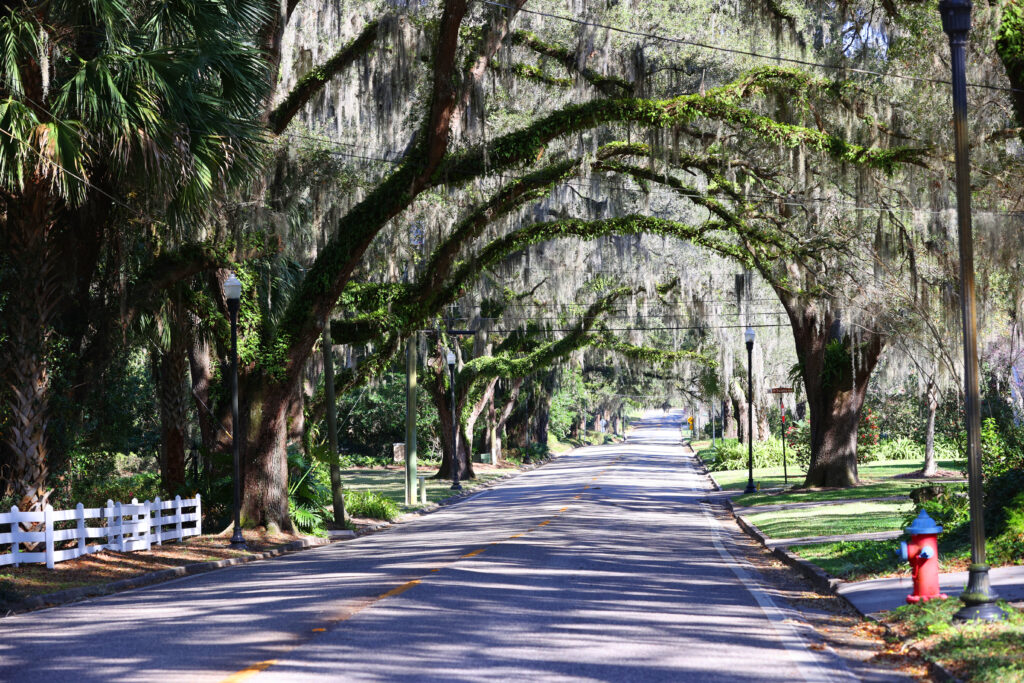 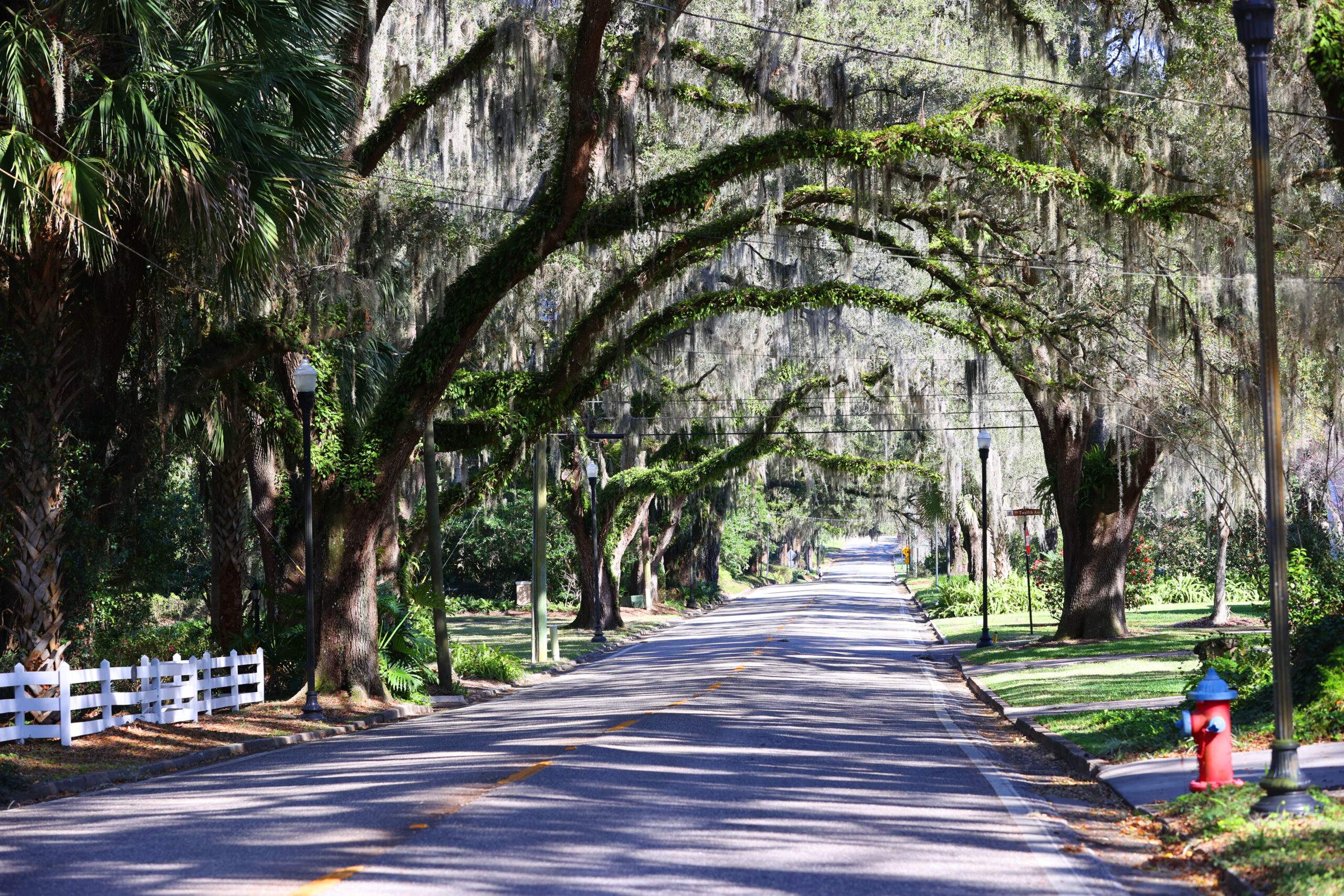 The tree canopy is shown on Southeast 5th Street in Ocala on Feb. 16. [Bruce Ackerman/Ocala Gazette]

In the world of trees, green does not always mean go.

“Most people, when they look at trees, they see it’s green, and they leave it at that,” said Danny Lippi, a board-certified arborist and certified tree risk assessor.

In August, Ocala hired Lippi to assess the integrity of the trees making up the iconic canopy along Fifth Street. The foliage on the trees was the least of his concerns.

“Just because a tree is green does not mean it’s not dangerous and that there aren’t structural issues,” Lippi said.

The good news: Of the 32 trees Lippi assessed, only one was recommended for removal.

The bad news: The trees are at least 100 years old and have issues.

Lippi said short of cutting the trees down and counting rings, it’s difficult to date the live oaks that line the road. But given the age of the neighborhood, they are likely less than 200 years old, according to Lippi’s estimates.

While the life span of a southern live oak can stretch up to 300 years or sometimes much more, the trees’ urban surroundings have taken a toll.

While providing a scenic drive, lining a street isn’t a natural environment for the oaks. Over the decades, the trees have lived through numerous road resurfacing and rebuilds.

“The structure has been compromised in two main ways that I’ve found,” Lippi said. “One, again, all the construction that has gone on on that street for a very long time… and then the other thing is poor pruning.”

The trimming and removal of dead and overgrown branches, when done correctly, should encourage growth. 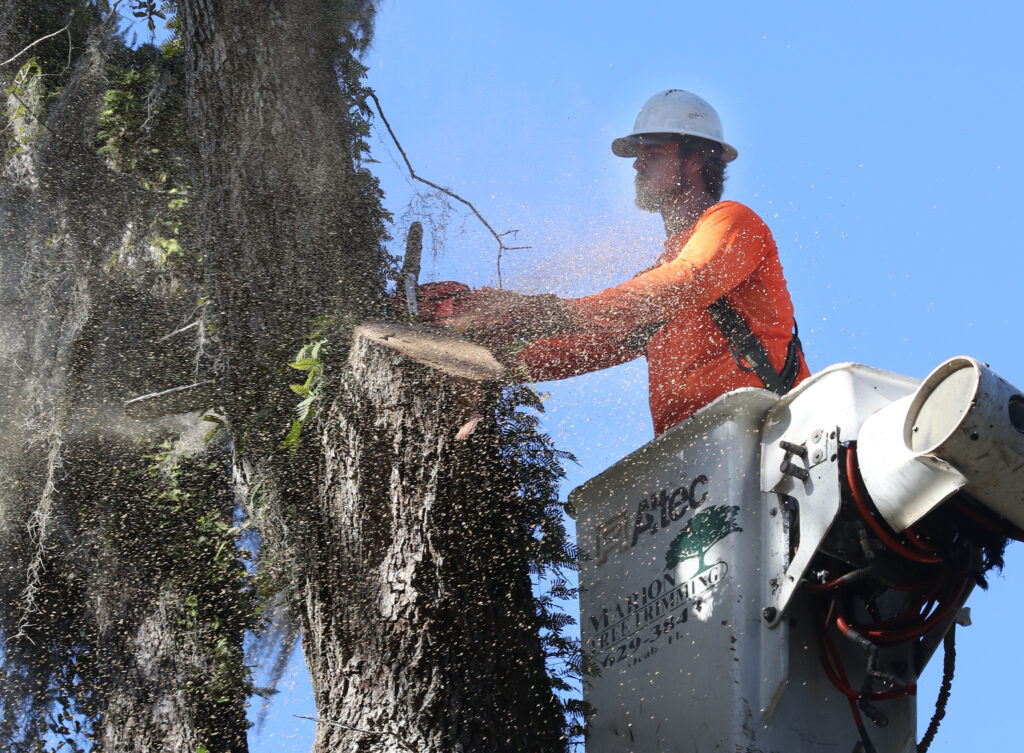 Logan Brooks of Marion Tree Trimming cuts through a limb of a large oak that was being removed on Southeast 5th Street in Ocala on Jan. 28. [Bruce Ackerman/Ocala Gazette]

However, if done incorrectly, pruning can leave trees over-extended with long, lateral limbs, which increases the risk of limbs falling.

“It’s kind of like holding a 1-pound weight,” Lippi said. “You can hold it to your chest all day long. But when you extend your arm straight out, it’s going to come down. The same exact mechanics apply to trees.”

On top of that, live oaks tend to be an overly ambitious species.

“That’s the killer of live oaks – they get too big for themselves over time,” Lippi said.

Dr. Frank Cannon is taking a proactive step. He recently took down a stately oak in front of his home to make way for a younger tree. Cannon is working with Urban Forestry Works out of Fort Pierce and the city to have a mature tree planted in the old spot. The new tree will eventually join the canopy.

According to Lippi, Cannon’s effort is just what the arborist would order.

“When all of your trees are the same age, it’s kind of like a population,” Lippi said. “You have to have younger people to come in and replace you. Otherwise, you have an aged population… replanting is a great idea.”

Cannon said he has watched the iconic canopy take blows through the years.

“It’s big, it’s old,” Cannon says of the canopy. “Our canopy is kind of getting knocked out. We had another one come down and others dying.”

Aubrey Hale, the City of Ocala’s senior urban design planner, said the historic canopy is important to the city.

According to Hale, lifting the canopy to keep lower limbs from being hit by service trucks is one of the proposed ideas to keep the canopy vibrant.

“The goal is to preserve them as much as possible,” he said.