The unbeatens square off 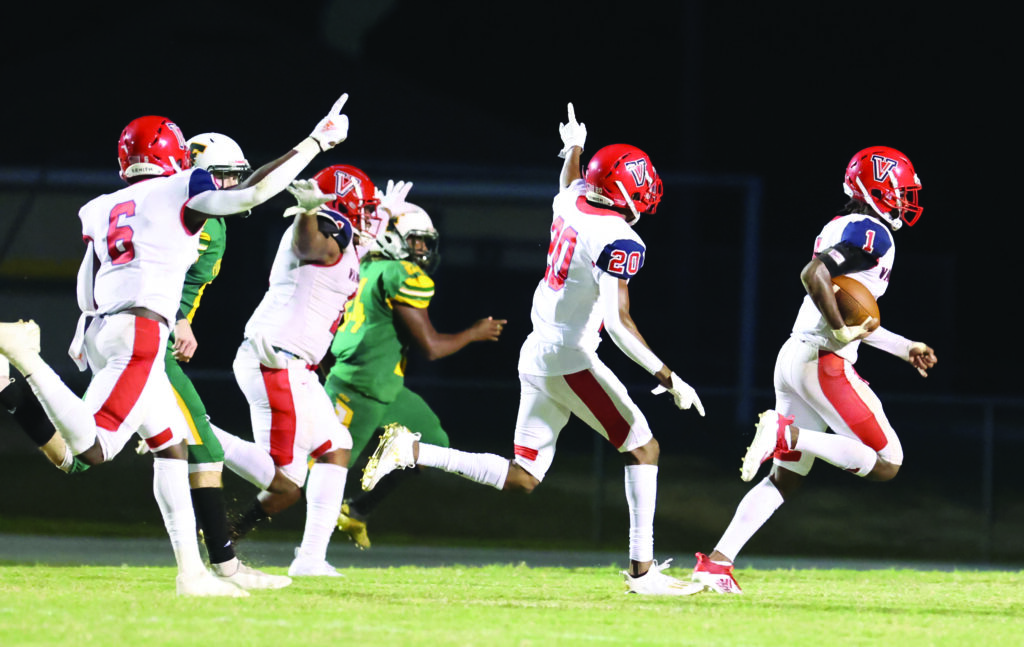 Vanguard’s Trevonte Rucker (1) sprints into the end zone for a touchdown as a host of Vanguard players celebrate ahead of Forest defenders at Forest High School in Ocala.

Vanguard’s Trevonte Rucker (1) sprints into the end zone for a touchdown as a host of Vanguard players celebrate ahead of Forest defenders at Forest High School in Ocala.

Two weeks into the public school schedule, the question of which Marion County football team will run with big dog Dunnellon remains unanswered after the Forest Wildcats lost to Vanguard, 20-14, a week after toppling highly ranked North Marion.

Meanwhile, North Marion, which came into the season ranked 52nd in the state by MaxPrep Sports, dropped its second consecutive game, this time to West Port, 24-13.

West Port faces Vanguard this week in a battle of the unbeatens.

Vanguard 20, Forest 14
Forest started strong Friday night, Oct. 2, when they recovered a Vanguard fumble in the first quarter to kill a Knights drive. But Vanguard responded with a huge sack, forcing Forest to punt on downs. Vanguard’s Tyrell Randall then put the Knights up 6-0 with a 52-yard run, and Vanguard converted the extra point for a 7-0 lead.

The two teams traded scores in the second quarter as Vanguard took a 14-7 lead into halftime.

Forest struck first in the second half as Brian Hart completed a 50-yard touchdown pass to Jamarrien Burt and the extra point knotted the score at 14 apiece.  The score remained tied until Vanguard’s Mykell Randall broke loose for a 37-yard rushing TD.

Trailing 18-7 after three quarters, North Marion scored first in the fourth quarter, but their 2-point conversion failed, making the score 18-13 with approximately 8 minutes remaining. Following a fumble recovery, North Marion was unable to score and surrendered the ball to West Port on downs.

The Wolfpack capitalized with a rushing TD, making the score 24-13.  West Port was unsuccessful in their attempt at a 2-point conversion, and the game ended with West Port on top 24-13.

“The boys and coaching staff put together a total team effort last Friday,” West Port Coach Steve Rhem said. “We are continuing to take things one day, one play at a time. We are looking forward to our game against Vanguard to really monitor our progress.”

Dunnellon 48, Belleview 8
The Dunnellon Tigers remained undefeated with a second straight convincing win, this time over the Belleview Rattlers, 48-8.

Dunnellon struck first with a 10-yard rushing touchdown by Trent Townsend, followed by a successful 2-point conversion.  Special teams for Dunnellon put another 13 points on the board with a blocked punt that resulted in 6 and a 75-yard punt return for a touchdown and successful extra point.

Near the end of the second quarter, Demetrius McCants caught a bomb from quarterback Trent Townsend for a 74-yard touchdown.  Entering the second half, Dunnellon was up a staggering 41-0, which allowed their second-string players some real-time game experience; final score 48-8.

Dunnellon’s offense was led by Townsend (185 yards passing) and Demetrius McCants (94 yards receiving).  On the other side of the ball, Sam Wryals and Isaish Valcius registered six tackles apiece. 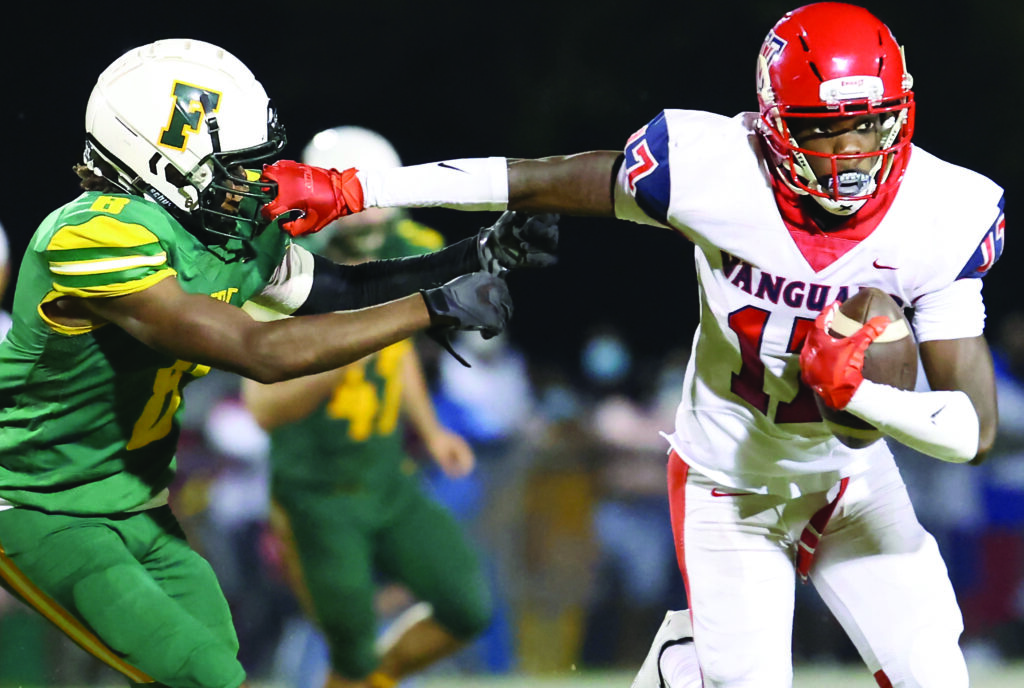 Vanguard’s Savion Harris (17) grabs onto the face mask of Forest’s Jaydon Hodge (8) as he eludes him for a large gain at Forest High School in Ocala.

Week three will be critical for several area teams. Vanguard, coming off of a season-opening victory, will face West Port. Inevitably, one team will walk away undefeated, while one will suffer their first loss of the season.

North Marion, meanwhile, looks to end their shocking two-game skid but faces a formidable opponent in Dunnellon, which has won its first two games by a combined score of 101-8.

Lake Weir and Belleview, which were both beaten soundly by Dunnellon, look for their first win when they square off Friday night.

And Forest, which stands at 1-1 after their loss to Vanguard, gets a bye week to prepare for Belleview on Oct. 16.

Ocala Christian Academy had hoped to build on the momentum from a close loss to Halifax on Sept. 18 (48-46) but instead stumbled and lost to Trinity Christian Academy, 40-8. The Crusaders were unable to put any points on the board until the fourth quarter, and with the score already 40-0, it made it almost impossible for them to recover.

Ocala Christian will take on winless First Academy on Friday.

St. John Lutheran unfortunately, due to not having enough players had to forfeit against Eagle’s View, giving them a second loss on the season. They will hope to turn it around against Halifax Academy on Oct. 16.

Trinity Catholic suffered a frustrating loss to undefeated The Villages Charter on Oct. 2.  In the hard fought back-and-forth battle, the Celtics came up 2 points short, with the final score being 27-25.   Unfortunately, the road for TC doesn’t get much easier as they face another huge test in a match-up with Bolles out of Jacksonville on Oct. 9. Bolles sits at 3-1 while the Celtics come into the game at 2-1.