The summer of Elvis 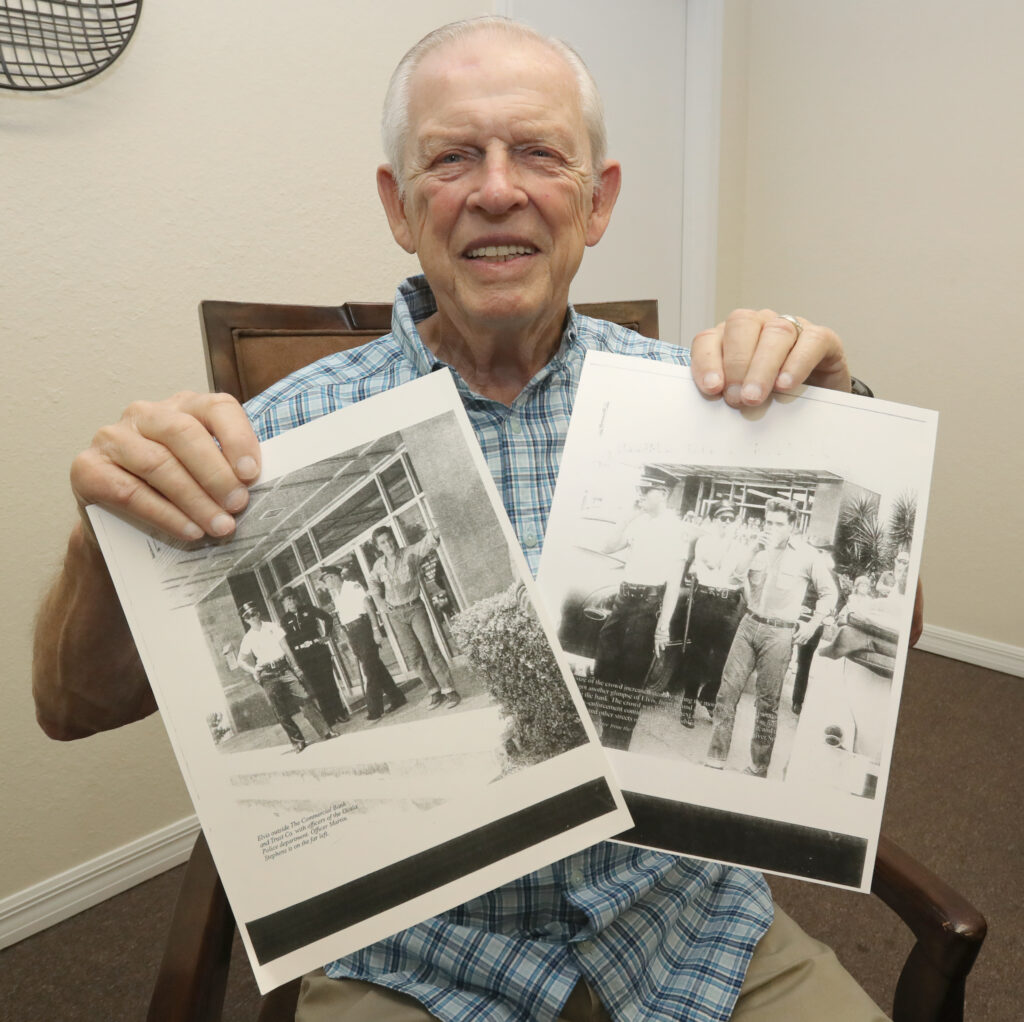 Martin Stephens, 82, holds photos of himself with Elvis Presley as he reminisces and tells his story in the Magnolia Media Company conference room in Ocala, Fla. on Tuesday, June 8, 2021. Stephens is shown on the left in both of the photos. Sixty years ago, in July 1961, Elvis was in Ocala filming scenes for the movie “Follow That Dream” and Stephens, who was 23 at the time, and an officer with the Ocala Police Department, was assigned to Elvis for protection. [Bruce Ackerman/Ocala Gazette] 2021.

Martin Stephens, 82, holds photos of himself with Elvis Presley as he reminisces about guarding Elvis while he filmed “Follow That Dream” in Ocala in 1961. [Bruce Ackerman/OG]

In 1961, John F. Kennedy became our nation’s 35th president. The U.S. faced a Cold War and a Space Race. Audrey Hepburn was a hit in “Breakfast at Tiffany’s” and Henry Mancini won an Oscar for “Moon River.”

Elvis Presley’s concert at the Bloch Arena in Pearl Harbor raised $62,000 to help build the USS Arizona Memorial. After filming “Blue Hawaii” there in late March, Presley arrived in Florida in July to make his ninth motion picture, “Follow That Dream.”

In the film, the vehicle of a gypsy-like family breaks down in coastal west Florida and the dad, Pop Kwimper, played by Arthur O’Connell, lays claim to a homestead. Presley played his son, Toby Kwimper. Much of the filming took place near Inglis and Yankeetown. In the film, the governor sided with the ragtag team of homesteaders, but others did not, and a battle ensued that included scenes filmed in a courthouse in Inverness and inside the Commercial Bank & Trust Co. in Ocala.

Martin Stephens, then 22 and an officer with the Ocala Police Department, was assigned to accompany Presley on the movie set in Ocala.

“It was over two long weekends,” Stephens recalled. “They were filming most of the movie at Yankeetown, but they needed to borrow some money, and they did the bank scenes in Ocala. The building is still there, right before the railroad tracks if you’re going into town.” 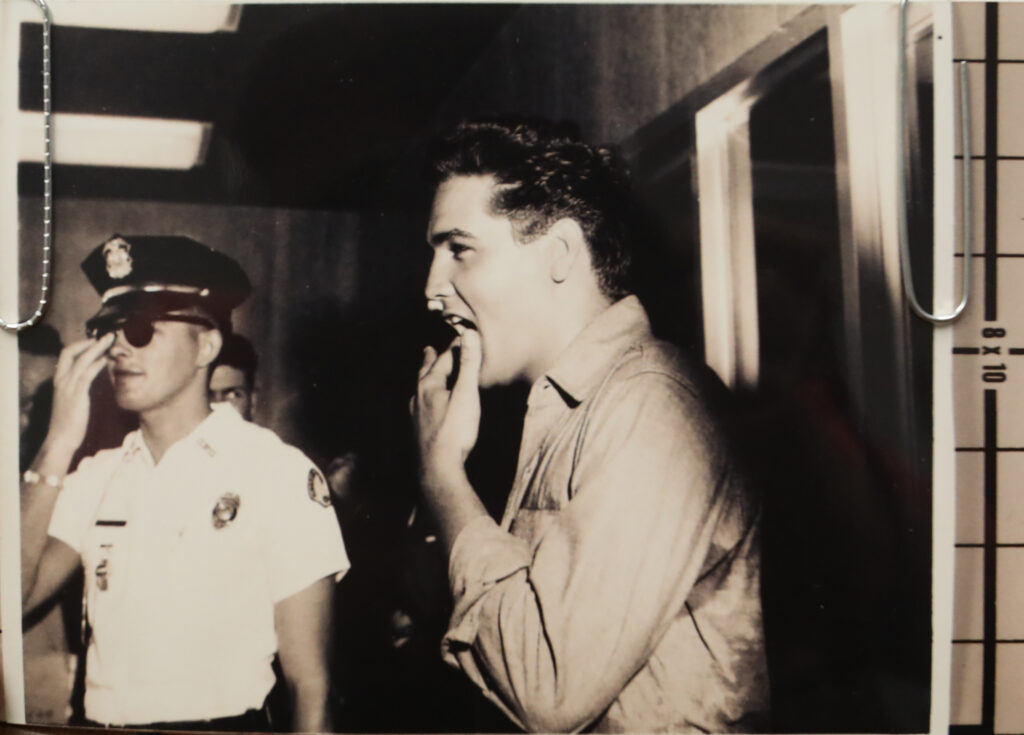 Martin Stephens, now 82, is shown in this original print with Elvis Presley. Sixty years ago, in July 1961, Elvis was in Ocala filming scenes for the movie “Follow That Dream” and Stephens, who was 22 at the time, and an officer with the Ocala Police Department was assigned to Elvis for protection. [Bruce Ackerman/OG]

Stephens said it would take quite a while for the movie crew to set up a scene, so they parked a travel trailer in the alley between the bank and the Masonic building. He said Presley and Anne Helm, in the role of the family’s 19-year-old unofficial babysitter, Holly Jones, would wait there.

“We didn’t go in the trailer, but every time he stuck his head out, I had to be there,” Stephens explained. “I was assigned to him personally the whole time.”

Stephens said the security detail for the movie set included the local Junior Chamber of Commerce motorcycle drill team, along with police officers and deputies from the Marion County Sheriff’s Office.

“We weren’t worried about riots or somebody hurting Elvis. The security was strictly to keep people back,” he explained. “He couldn’t do nothing without a crowd. We would offer to chase people off, and he’d say, ‘No, no, that’s what I’m supposed to do.’ He was very personable and a nice guy. He was interested in people and was easy to work with.”

Stephens said at least one person took advantage of Presley’s good nature. He said if anyone handed Presley a piece of paper, they would get an autograph. A bank guard “probably got 500,” he said.

Stephens asked Presley if he wanted the guard kept away. Presley said, “It’s just part of doing business.” Stephens said he got one autograph, on the back of a bank draft.

Stephens remembered the film crew turned off the air conditioning in the bank because it made too much background noise, so Presley had to change his denim shirt every 15 to 20 minutes,

“It was unbearably hot in there,” he said.

Stephens also remembers Presley fancied a pair of sunglasses worn by a deputy on the security detail. He asked one of his entourage to get him some just like them.

“The next morning, we’re coming by the deputy and Elvis says to his guys, ‘By the way, where are my sunglasses?’” Stephens said. “In about 30 minutes, I saw Elvis, and he had on a pair of sunglasses, and I know, though the deputy never admitted it, that he sold his sunglasses.”

One of Stephens’ fondest memories is the day Presley invited his group to lunch.

“They had rented the Marion Hotel, and the movie crew went over there to eat. When we went to eat lunch that first day, Elvis told me, ‘Let’s go.’ So I grabbed three guys. We went over there, and I didn’t know exactly what we were supposed to do. Elvis went inside, so I said, ‘Well, I guess we guard the doors,’” he said. “We’re standing there, and in a minute, Elvis comes out and says, ‘Come on boys, you don’t have long to eat.’ We go in, and he’s got a table, and he says, ‘I went ahead and ordered for you.’ They brought us T-bone steaks, and he got a grilled cheese sandwich. ‘I didn’t know what you wanted,’ he said. ‘I just went ahead and ordered for you.’ That’s the guy I remember.”

Stephens has photos of himself and other security personnel huddled around Presley inside the bank and said he was talking to them about his love of karate.

“He did us a demo and even had some guys go get some boards to break,” he said, pointing to one of the images. “That’s the thing, these are guys from Ocala, see, and I wonder if we could track these people down. A lot of these are in the book.”

The book he was referring to is “Elvis Presley the Summer of ’61,” which includes news reports, interviews with the cast, crew and locals, and more than 200 photos. Stephens, of course, has a copy and will gladly point out the pages that correspond with his remembrances.

“If anybody challenges me on that photo,” he said, stabbing a finger at one image showing him near Presley, “I have the negative!”

He points out a photo showing the marquee of the Florida Theatre sign, which proclaimed Welcome Elvis and Now showing “St. Louis Blues” “A Dog of Flanders.”

“That’s C.R. Proctor,” he noted, pointing to another photo. “That’s the director. That’s Col. Tom Parker, Elvis’ manager. Here’s little theater people, Michael Hall. They were the people in the bank. There’s Sadie Darnell, she was 9 years old. Her cousin was Tom Petty.”

Petty, then 10, met Presley on the set because his uncle was involved in the film’s production. Shortly afterward, according to local lore, the budding young musician swapped his slingshot for a friend’s collection of Elvis Presley records. Petty later became a noted entertainer in his own right, and Darnell served as the sheriff of Alachua County for several years.

Some other youngsters hanging around the movie set that sultry summer were Presley’s stepbrothers, Billy, Rick and David Stanley. His father, Vernon Presley, had married their mother, Dee Stanley, the year before. Billy Stanley said it was his first trip to Florida and his first time on a movie set.

“We kids had moved into Graceland a year before, so it was all new to me,” he said. “We stayed close to where they were filming. There was a hotel, over close to the bridge scene, where they had the building on the beach. That’s where we stayed. We were there for about two weeks. I was only 8 years old. I loved the weather. It was nice and warm, and we stayed in the pool most of the time when we weren’t on the film set.”

He recalled that it was “fun hanging out on the movie set, watching how it was made, Elvis showing us around. And his co-star, Anne Helm, taught my brothers and I how to play Frisbee. It was a new toy; it had just come out. We got to meet everybody, all the actors and met the kids that were in the movie. They seemed a little standoffish, so my brothers and I didn’t push it. It was fun. We had a great time.”

“Follow That Dream” premiered at the Marion Theatre on April 11, 1962. An “Ocala Star-Banner” article reported that nearly 1,000 people were in attendance. Presley was not among them as he was busy filming another movie.

Stanley said that after his stepbrother made each film, he would receive a 16mm reel that they would watch at home.

“Down in the basement at Graceland, there used to be a projection room, so that’s where we saw all of Elvis’ movies,” he said. “It was fun sitting there and being able to say, ‘Yeah, I remember when they filmed this.’ To me, it was just normal. It’s like nobody else has a famous stepbrother? When I say normal, I mean Elvis always downplayed the entertainer part. By the time I realized who he was, it didn’t matter because all I heard was ‘Billy, it’s just a job. These people aren’t any better than anybody else.’ He said people that dig ditches are more important than what we do. That’s the way he always played it with us.”

Stanley, who lives in Memphis, has a robust following on social media, often greets fans at Graceland, and loves to reminisce about living there and sharing time with Presley, who died in 1977.

Stephens, now 82, recalls many times over the years that people would seek him out about his time on the movie set with the famed entertainer.

“I’ve gotten a call at 3 o’clock in the morning from England from someone wanting something,” he said. “I don’t mind. He was just a super, super nice guy.”