The ride of a lifetime 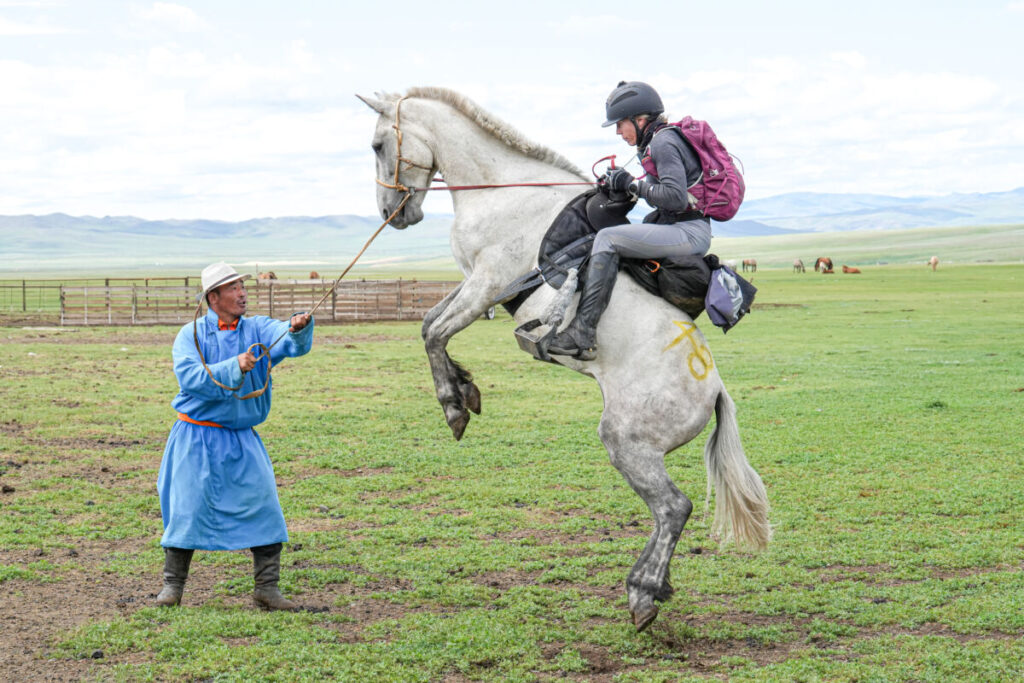 Dr. Tiffany Atteberry, 46, who competed along with 45 other riders from around the world in the July 23-Aug. 1 Mongol Derby race. Photo credit: The Equestrianists/Shari Thompson

Covering 600 miles across the Mongolian Steppe, the Mongol Derby is billed as the longest and toughest horse race in the world. And it starts at a full gallop.

“The start of the race is so intense and so fast. It’s like a cavalry charge,” said Dr. Tiffany Atteberry, 46, who competed along with 45 other riders from around the world in the July 23-Aug. 1 race. “You are randomly assigned a Mongolian horse for the start, so you don’t have any idea what you’re getting. But it’s obvious that the fastest horses are chosen for that first leg to get everyone’s adrenaline going and it works. My first horse was like a Ferrari and got me off to a great start.”

By the end of her first day riding across the rugged terrain, Atteberry experienced her initial challenge as she looked for a place to spend the night.

“I was riding alone up in the mountains and couldn’t find a local ger or yurt to stay at for the night. And it was pouring rain,” explained Atteberry, noting that riders competed from 7 a.m. to 7 p.m. “So, I backtracked to an old well house that I had seen. I was able to get water for the horse from the well and hobbled him for the night. I got out my camping gear and settled into the well house for shelter.”

But when race officials, who track all the riders through GPS, came to check on Atteberry, they were not pleased with her situation.

“The race officials were concerned about my safety. I was advised to meet up with riders Chris Walker and Patrick Hefffron, who were camping in a nearby valley,” said Atteberry. “Of course, that put me riding after 7 p.m., so I picked up my first time penalty. I wasn’t happy about that, but those are the rules of the race. Tomorrow would be another day.”

The inaugural Mongol Derby was in 2009 and although the course changes from year to year, it is based on Genghis Kahn’s horse messenger system that began in 1224. There is generally a field of 40 or so riders, usually evenly split between men and women. In addition to dealing with the challenges of mountains, valleys, sand dunes, open grasslands and the unpredictable hot, cold, rainy weather, riders also have to be able to handle the Mongolian horses. Small in stature at but 13.2 hands to 15 hands, the hardy Mongolian horses are well-suited to their rugged country. But they are often described as semi-wild and with one buck they can end a rider’s Mongol Derby.

Riders change horses every 25 miles at horse stations, where a horse must pass a vet check before a rider is allowed to pick out another horse and continue on. If a horse doesn’t pass a vet check, a rider receives a time penalty, which they have to serve out before the end of the race. Riders generally cover 75 to 100 miles a day, only being allowed to ride in the daylight hours. There is the option to camp out or stay in locals’ yurts.

Competitors have 10 days to finish the race, but winning riders come in under that mark. In 2019, Bob Long, 70, from Boise, Idaho, became the oldest person to win the Mongol Derby, doing so in seven and a half days. Due to COVID-19, there was no Mongol Derby in 2020 or 2021. To make up for those cancellations, two events were scheduled for 2022. Atteberry, who had initially signed up for the 2020 Mongol Derby, competed in this year’s first event with a second one set for Aug. 10-19.

“I was so disappointed when the race was canceled those two years,” said Atteberry, who established her Ocala-based Atteberry Mobile Veterinary Services in 2003 and specializes in equine care. “So as soon as I was contacted that it was back on in 2022, I was delighted and started training.”

An accomplished horsewoman in several disciplines, Atteberry turned her attention to endurance riding to prepare for the Mongol Derby. Local endurance riders Deb Walker and Caren Risley lent Atteberry their expertise and even their horses. Atteberry bought a Mongolian saddle and trained and competed in area endurance races with the 11 pounds of gear she would be allowed to carry on her body.

“In a way, I’m glad I ended up having more time to train,” said Atteberry, who, with her husband Scott Brown, also raises thoroughbreds. “All that training really paid off.”

Her Kingdom for a Horse

At each horse station, Atteberry became astute at picking out what she hoped would be just the right horse.

“I would look for a horse that looked fit, particularly paying attention to their hooves,” noted Atteberry. “I wanted a horse with muscles and worn hooves that meant he was being ridden often.”

She also had to rely on the locals, who own and know the horses.

“You learn not to ask the herders in their 20s for their recommendation because they generally wanted to put you on a wild one,” said Atteberry, who rode 27 different horses. “I would look for an older herder or a young boy, ask them humbly for their help and motion that I wanted a fast horse. That seemed to work. I only got one slow poke and one who pretty much just ran off with me that whole time.”

Atteberry also noted that “almost every horse bucked right after it was saddled, so if I could get a herder to get on a horse first and get that buck out of him, then I would.”

One gray horse perhaps thought he was a bit of a rodeo horse. Once Atteberry was on, he went straight up on his hind legs several times and then jumped sideways, eventually tossing her. But she got right back on and off they went.

Eating the local cuisine was also part of the experience, both out of respect and survival.

“The locals were all very nice and they want to share their way of life with the riders, not only their horses, but their food,” said Atteberry. “You want to respect that and you also need all the calories you can get, so you eat the local food. That included boiled mutton and goat, fried rice and potatoes and a lot of fermented milk drinks. The most common fermented drink is airag, which is fermented mare’s milk. My favorite was the fried rice and potatoes.”

After her first day of riding alone, Atteberry then rode in the company of other riders. Eventually, she teamed up with Deirdre Griffith from Wyoming and Willemien Jooste from South Africa. The trio rode together, sometimes in the lead and other times following the aforementioned Walker and Hefffron, from England and Ireland, respectively.

“Deirdre and Willemien were great to ride with and we enjoyed tracking the men,” said Atteberry, who was surprised at warm temps in the 80s the whole ride. “In a way, it’s better to be the hunter than the hunted. It’s a lot less pressure.”

There was moment when Atteberry thought her ride was over. The women had camped out with a local family, hobbling and line-tying their horses for the night. When they came out the next morning, Atteberry’s horse was nowhere in sight.

“He had somehow gotten free during the night. I thought my ride was over right then,” said Atteberry. “But I finally spotted him, a lone silhouette grazing on the horizon. The hobbles had kept him from totally running off. I managed to catch him, get tacked up and was able to head out on time with Deirdre and Willemien.”

“I had a 2-hour penalty to burn off and couldn’t leave with Deirdre and Willemien,” said Atteberry. “Seeing them leave without me was my lowest point. But then much to my surprise, I had cellphone reception and was able to contact my husband in Ocala. Talking to him really picked me up.”

Griffith and Jooste crossed the finish line together in first place on Day 8. After serving out their penalties, Walker and Hefffron came in later that day together in second place. Atteberry left the horse station at 7 a.m. on Day 9 and crossed the finish line two hours later in third place. Officially listed as the fifth person to finish, Atteberry was on the podium, receiving a third-place green Mongolian robe and a Bronze medal.

“I was so emotional when I crossed the finish line,” said Atteberry, whose goal was to finish in the Top 10. “The event, everything exceeded my expectations. I came away with such a wonderful feeling of being present in that moment and having so much gratitude for the experience. And I came away with a lifetime of memories of competing in and finishing the Mongol Derby.”