Rosemarie Stock has dealt with staggering loss and betrayal, but Community with a Heart helped her get back on the road and ready to start over. 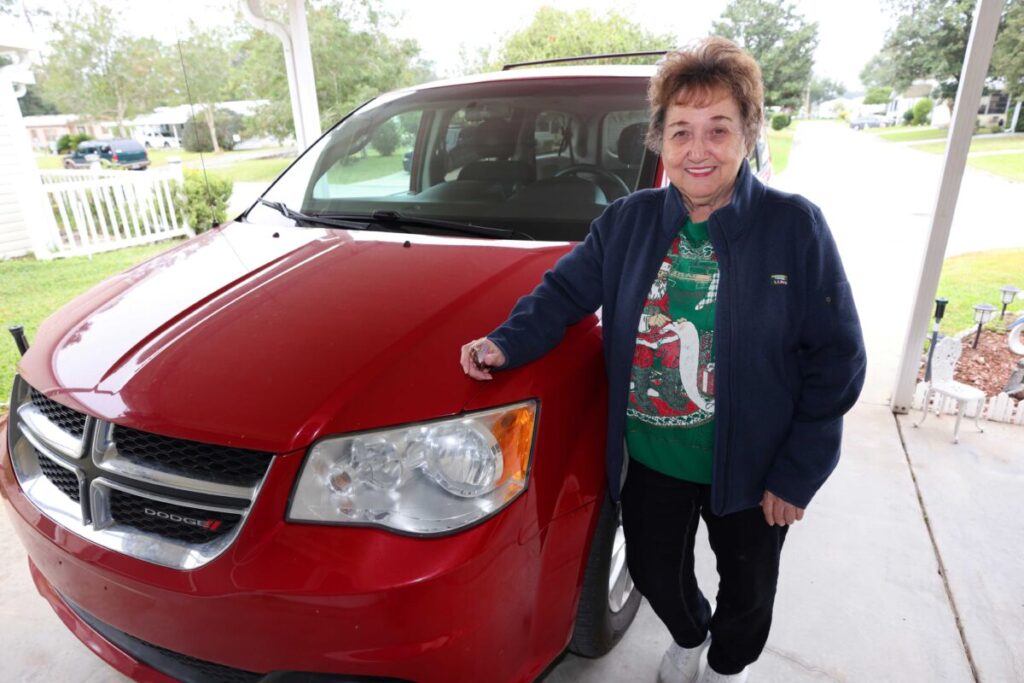 Rosemarie Stock poses with her 2014 Dodge Grand Caravan at her home in Sweetwater Oaks off Northwest 44th Avenue in Ocala, Fla. on Thursday, Dec. 22, 2022. Stock, 80, received financial help from Community With A Heart for repairs to her minivan to make it safe to drive. Stock lost her husband in 2020 and didn’t have enough income to repair the car which she needs for doctor’s appointments in addition her other daily needs. She was supposed to get a knee replacement in The Villages in early December, but the procedure had to be rescheduled for a later date because she tested positive for COVID-19. [Bruce Ackerman/Ocala Gazette] 2022.

Rosemarie Stock has never been the type to feel sorry for herself. Though she’s experienced some heavy losses and setbacks, she doesn’t lament her problems for too long nor does she dwell on her misfortune.

Over the past three decades, Stock has helped others in need, from assisting family members and friends to taking care of her husband for 15 years before he died two years ago.

Before Roger fell ill, Stock had helped him take care of his ailing parents when the couple moved to Ocala from Pennsylvania in 1994. He was 86 when he died, and her first husband died at 40. She had three children from her first marriage and worked in the restaurant industry until moving to Florida.

Now 80, Stock’s only surviving child, 52, suffers from irreparable respiratory complications. Her other children, a daughter and son, died in the prime of their adulthood.

Despite a number of staggering setbacks, Stock has pushed through

“I had a couple of lady friends that I took to the doctor, and I’d clean their house and do stuff like that.”

To make ends meet after Roger’s death, she put her manufactured home for sale in Rolling Greens, an Ocala 55-and-older community where the couple had made friends and enjoyed what she considered a happy life together.

The monthly land lease attached to the home she owned became unaffordable on her fixed income.

“The lot rent went up over $800,” she said. The higher expense forced her to sell her home.

The Realtor wrote everything up and said he needed to check on things.

“When he came back, he told me that the house was not mine, that Roger electronically turned over the house to his son, who took the house over,’’ she said. “I had no home, and I was devastated. I was absolutely devastated.”

Though Stock got her house back, the experience took its toll. Lingering questions remain about her marriage, her husband and the fraudulent transaction that took place.

“He left me nothing,” she said of her second husband.

“I had no insurance and, though Roger was a veteran he wasn’t in a war, and there was nothing that the VA would give me. So, I’m living on my Social Security.”

After an extremely trying period, the final straw came by way of the breakdown of Stock’s van, which she took to Oscar’s Auto Center in northwest Ocala. When she found out about the staggering list of repairs, which cost around $2,000, Stock broke down and cried.

Moved to help, owner Oscar Agudelo referred Stock to Community with a Heart (CWAH), which helps Marion County residents with emergency expenses. Her sister helped her with a loan for the rest.

“It’s a very good organization, wonderful people, that might be able to help you,” the mechanic said of Community with a Heart.

“And that’s how it came about,” Stock said. “(CWAH case manager) Cleve Butler came to the house, and I told him about everything going on.”

CWAH assists with outstanding mortgage and utility bills and needed home repairs. Local charities and members of the CWAH board recommend families for consideration, and up to $1,200 in expenses can be covered through the fund. Often local businesses, churches, and volunteers donate their services to stretch the giving even further. All donations received go directly to help individuals and families living in Marion County.

Aside from a sore knee, Stock is now able to get around now and hopes to get an operation soon. She also hopes to stay in her current Ocala residence but needs another stroke of luck to make that happen.

“If I could pick up a part-time job, that could help me,” Stock said. “I would just stay here and wouldn’t have to move again.

To donate to Community with a Heart visit ocalafoundation.org/community-foundation-funds/community-with-a-heart.