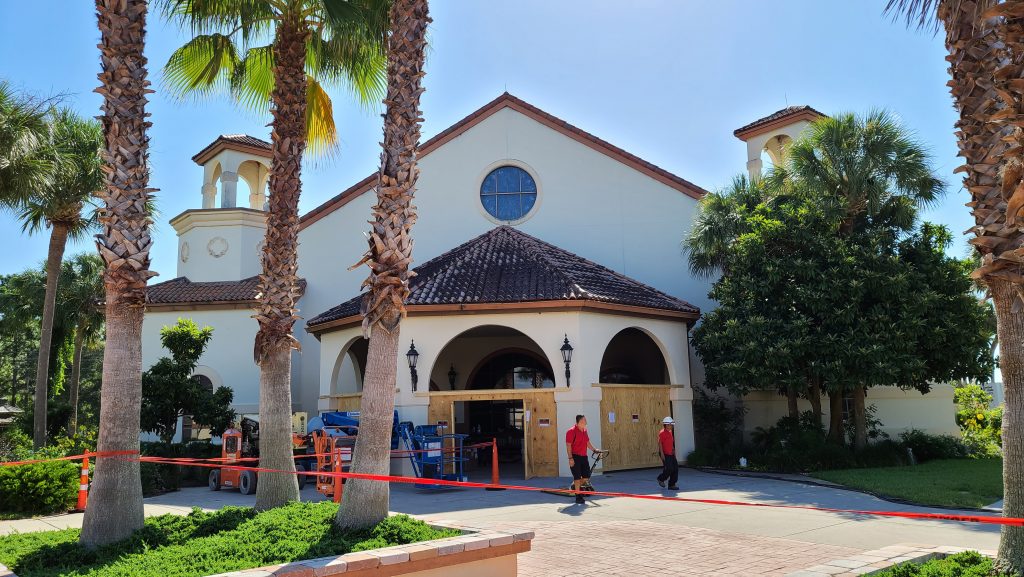 Workers are shown near the entrance of Queen of Peace Catholic Church which is being repaired on State Road 200 in Ocala, Fla. on Wednesday, August 5, 2020. [Bruce Ackerman/Ocala Gazette] 2020.

Workers are shown near the entrance of Queen of Peace Catholic Church which is being repaired on State Road 200 in Ocala, Fla. on Wednesday, August 5, 2020. [Bruce Ackerman/Ocala Gazette] 2020.

One month after he allegedly drove a van into the entrance of Queen of Peace Catholic Church, the suspect, one of numerous thugs who attacked Catholic churches across the nation throughout this summer, has pleaded not guilty.

Appearing in court by Zoom on Tuesday, Steven Anthony Shields, 24, pleaded not guilty through Assistant Public Defender Chad Hutcheson to charges of burglary, arson and fleeing from law enforcement.

According to an article by Florida Catholic, a handful of people were in the church awaiting the start of Mass on July 11.

Around 7:30 a.m., Shields crashed a white van into the church entrance, poured gasoline around inside the building and then set it ablaze, sheriff’s investigators said.

The Gazette could not reach the Rev. Patrick O’Doherty, pastor of Queen of Peace for 33 years, for comment.

But according to Florida Catholic, O’Doherty recalled that when Shields left the church, “a fireball came out behind him.”

He added, “I was 10 feet away from him. Luckily, Mass hadn’t began yet and the pews weren’t packed. There was about five individuals in there, saying their rosaries before Mass.”

Shields, a Dunnellon resident, fled the scene but was captured and arrested within 20 minutes.

O’Doherty told Florida Catholic that he was saddened by the attack, but not surprised.

“I knew this could happen in this political and religious climate,” he said.

The fire at Queen of Peace was one of a lengthy string of violent acts targeting Catholic churches around the country this summer.

Some examples: A statue of Jesus Christ at a church in Miami was decapitated. Vandals torched a statue of the Virgin Mary in Massachusetts, and beheaded another in Tennessee. The renowned St. Patrick’s Cathedral in New York City was marred by graffiti. At Providence College in Rhode Island, a Catholic school, a man was arrested for vandalism and assault after police said he spray-painted swastikas and anti-Catholic language on gravestones at a campus cemetery, and fought a safety officer who attempted to stop him.

The Washington Examiner recently reported that Republican Rep. Chuck Fleischmann of Tennessee, who is Catholic, has written U.S. Attorney General Bill Barr about urging the Justice Department to crack down on “religious discrimination.”

“Since June there have been nearly a dozen reported attacks on Catholic Churches around the nation,” Fleischmann wrote to Barr. “I find these attacks to be a disturbing trend, happening in multiple areas across the nation, including within my own congressional district.”

“These people who would desecrate any house of worship — whether it is a Catholic church or any other house of worship — need to know that it won’t be tolerated,” the lawmaker told the Examiner. “And I think it rises to the level of a hate crime.”

In a 3½-minute YouTube video posted on Queen of Peace’s website, O’Doherty said, “Evil never attacks evil. So the church is something very good. And so I take the attack on the church as a sign that we’re doing the right thing here.”

O’Doherty said besides repairing the entrance and cleaning up the fire damage, the church would have to replace some artwork.

He added, “As lovely as this church is, it’s a building. It can be replaced.”

Shields is due back in court on Dec. 3. He is tentatively scheduled to go on trial on Dec. 21, court records show.

At least one of the charges against him carries a prison sentence of life, if he is convicted.