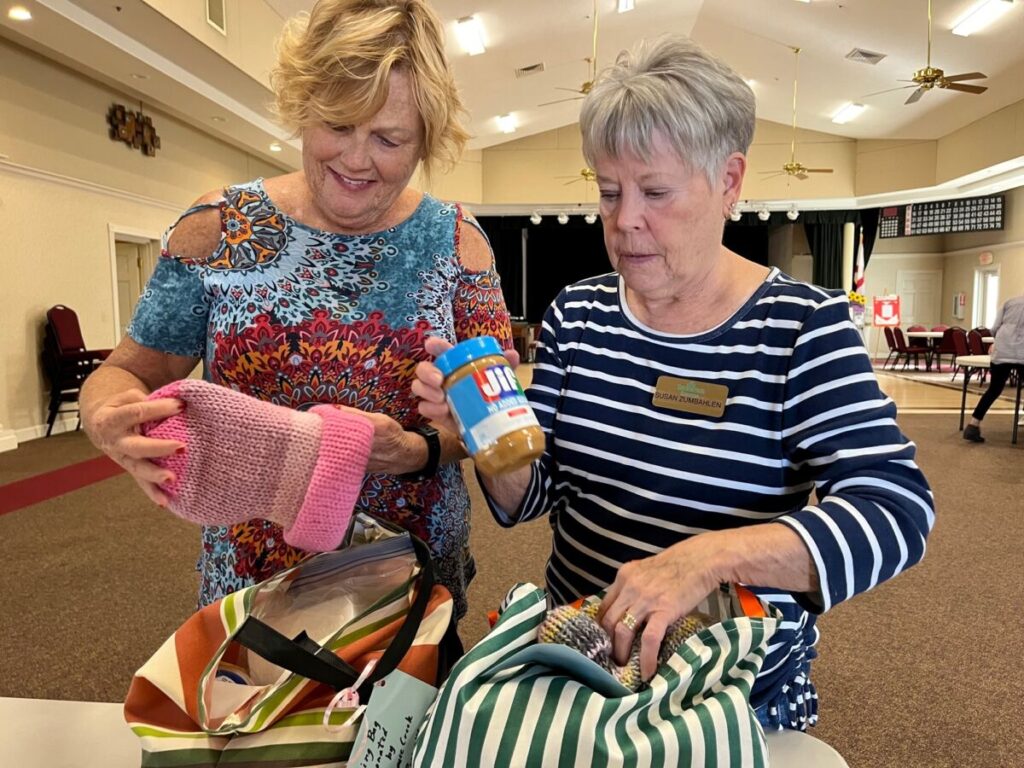 About 50 Del Webb Spruce Creek Preserve residents gathered on Thursday to stuff bags with donated toiletries and food for people in need in Dunnellon.

“These are called Blessing Bags,” said Rosemary Werner, the primary organizer of the effort that involved members of the 55-plus gated community.

Volunteers met at the development’s Community Center to fill reusable cloth bags with hygiene items and nonperishable food  donated by the residents of the 675-household community located southwest of Ocala on State Road 200.

The filled bags will be delivered to homeless outreaches in nearby Dunnellon including St. John the Baptist Catholic Church, Seventh-day Adventist Church and the Annie W. Johnson Service Center, Inc. Homelessness is a significant problem in the area. According to Kevin Chris Christian, director of public relations for Marion County Public Schools, there are 945 students in the district who are identified as homeless, 40 of whom are enrolled in Dunnellon-area schools.In our area, he said, that typically includes students living in hotels/motels, tents, trailers or living with others.

“I told them to applaud themselves,” she said.

Avina, who has been with the center for 23 years, said the outreach helps from 15 to 25 households, with members of “all ages,”on the center’s open days, with an uptick usually during the holidays.

Avina said the work of the center would not be possible without the support of the community like the Spruce Creek Preserve residents “who should be commended.”

“(All contributors) are aiding our mission of helping people and loving each other,” Avina said.

“It was an amazing turnout,” she said.

Zumbahlen has been posting about the Blessing Bag program on Facebook for some time. The volunteers made quick work of filling 75 adult and 25 baby bags.

Jeffrey James and Roger Jimmo of the Spruce Creek staff helped handle the accumulated donations during the session.

Kim Rowles, an administrative assistant with the development, said the Blessing Bags program was the first resident program of its type she was aware of.

“This is wonderful,” she said.

Meanwhile, Werner said a woman who received a Blessing Bag when they were delivered to an outreach was “thrilled” and asked if she could “keep the bag.”

Werner commented the bags could be used as pillowcases. 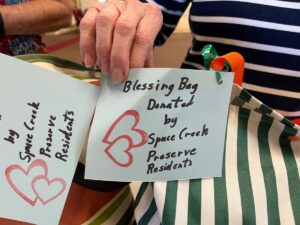 Tags on the Blessing Bags

Werner thanked the residents for their contributions and stuffing the bags. She also cited the contribution of materials from the Dunellon Community Thrift Shop on County Road 484 to make the cloth bags.

Werner hopes the Blessing Bags program will become a model for the area.

“We’d like to see the other gated communities (in Marion County) get involved,” said. 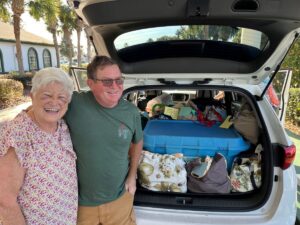