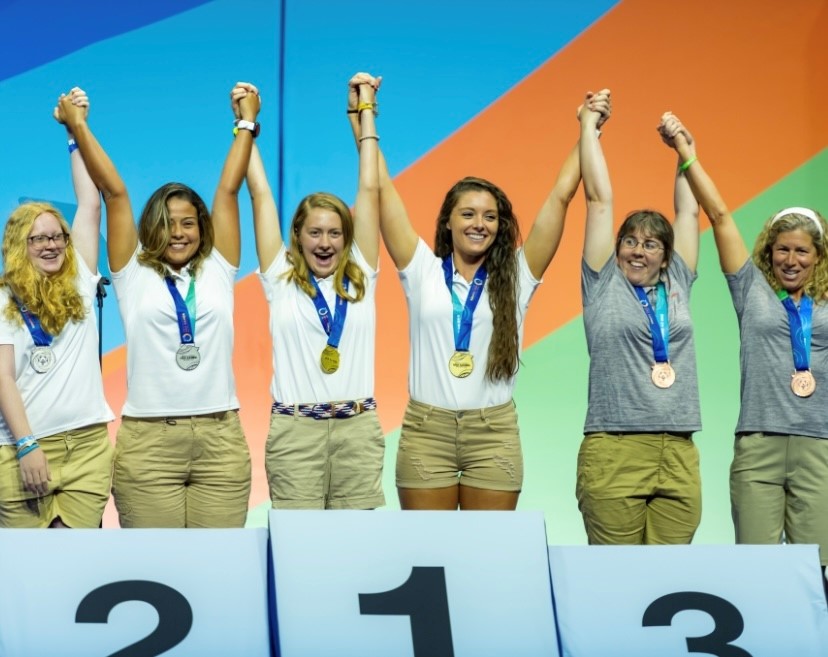 Adrienne Bunn, center left, and her United partner Amanda Kenny, center right, celebrate winning the gold medal in the triathlon from the podium during the Special Olympics held in Orlando earlier this month. [Image supplied]

Two weeks ago, a total of eight athletes in several different disciplines represented Marion County during the 2022 Special Olympics USA Games in Orlando.

By the closing ceremonies on June 12, all eight athletes had medaled in their respective events, some multiple times.

“The USA Games were an incredible opportunity for our SOFL [Special Olympics Florida] athletes to show what they are capable of to a national audience,” said Justin Copertino, senior regional director for Special Olympics Florida. “Both the athletes and the staff of SOFL worked for years to prepare for the Games, and we are thrilled to see how everything came together.”

Adrienne Bunn, along with Amanda Kenny (her Unified partner), won the gold medal in the triathlon, completing the race in a time of 1:22:30. Thomas Welsh (with KC Northup) won bronze in the triathlon (1:26:49). Triathlete Zachary Deonath (with Jeff Meister) won bronze as well (1:34:27).

During the equestrian competition, the first-ever as part of the Special Olympics, Marion County had four athletes compete—all four earning medals.

Alexia McCue, who lives in Levy County but trained all year with Coach Betty Gray, head equestrian coach, in Marion County, won a gold medal for Equitation, Trail and Dressage.

Bunn, 16, who has been training and competing since she was 9, was first diagnosed with autism when she was 4 years old.

For several years, she used therapeutic horseback riding to help improve her speech, balance, social skills and focus, before crystallizing her deep love for swimming, cycling and running by competing in the triathlon.

Originally from Clear Lake in Orlando, Bunn, daughter of Bob and June, is the first female on the autistic spectrum to compete in the triathlon at the Games and one of the four triathletes from the original pilot program before the triathlon was a sanctioned sport in Florida, and the only girl amongst that initial group.

Today, according to John Robles, head coach of Florida’s USA Games triathlon team, Bunn is the number one female triathlete in Florida. Triathletes compete in a 440-yard swim, a 12.5-mile bike ride and a 5K run.

Bunn called the experience of competing in the Special Olympics “exciting,” adding that it felt a little overwhelming winning both the gold and bronze medals.

“I’m so proud to be part of such a great team and a great community of people,” she said. “I’m so happy I could make Marion County proud.”

Going into the triathlon, Bunn said she knew she was prepared and hoped for a great race to win gold. She especially thanked her Unified partner Amanda Kenny for helping her stay mentally strong in front of all the cameras during competition.

“The support from my school, my friends, my church, my family, the YMCA, Sheriff [Billy] Woods and all of law enforcement has been amazing,” said Bunn.

Her next goal is to become a professional triathlete when she turns 18 completing in Ironman triathlons, which consist of a 2.4-mile swim, a 112-mile bicycle ride and a marathon 26.2-mile run, raced in that order. It is widely considered one of the most difficult one-day sporting events in the world.

Copertino believes that this month’s Games in Orlando are just the beginning for Bunn and her fellow competitors.

“Adrienne’s accomplishments, and the accomplishments of all our athletes, are a testament to the athletes’ discipline and dedication,” he said. “They trained long and hard to become incredible athletes, helped along the way by some truly exceptional and committed coaches.”

Founded in 1968, Special Olympics is a global movement to end discrimination against people with intellectual disabilities and foster acceptance of all people through the power of sport and programming in education, health and leadership.