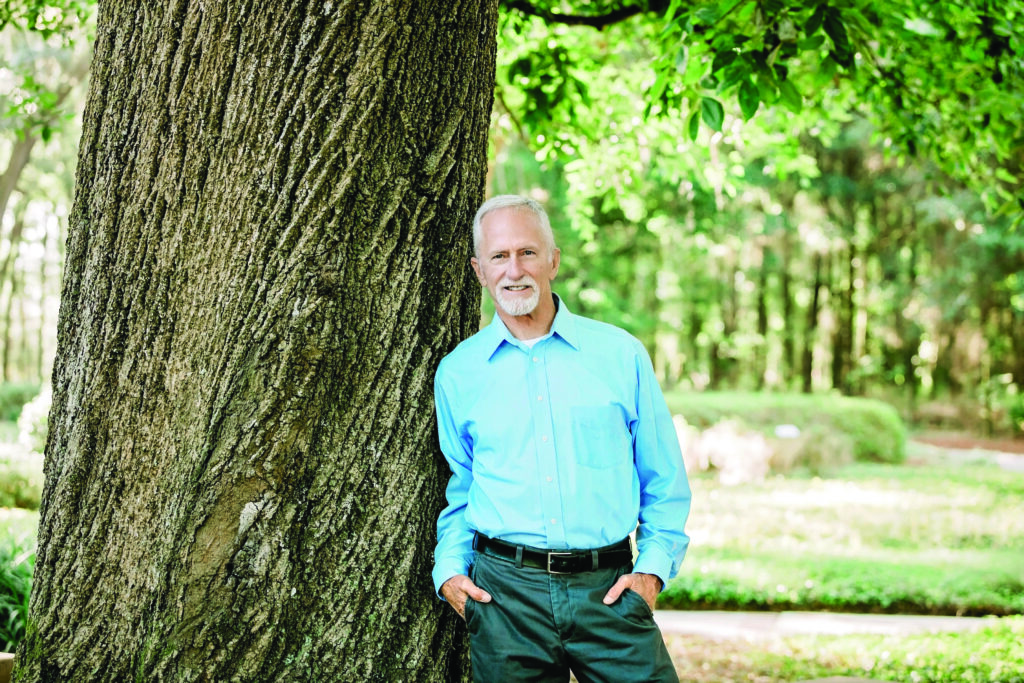 Look at the promotional ads for the new Calesa Township on Ocala’s westside, and you’ll notice something different, at least for a major housing development along the State Road 200 corridor. There are children in picture after picture.

It is a departure from what most people associate with the 200 corridor, an enclave of retirement communities that stretches 10 miles from Interstate 75 to the Withlacoochee River. And it is being built by the granddaddy of all Marion County retirement community developers, On Top of the World.

Calesa Township was unveiled earlier this year by Colen Built Development, a sister company of On Top of the World Communities Inc. It will be built on 1,500 acres along Southwest 80th Avenue and 38th Street. When it reaches buildout – expected in 15 to 20 years – it will have an estimated 5,000 homes in 19 neighborhoods that are being designed to emphasize healthy living and outdoor activities. 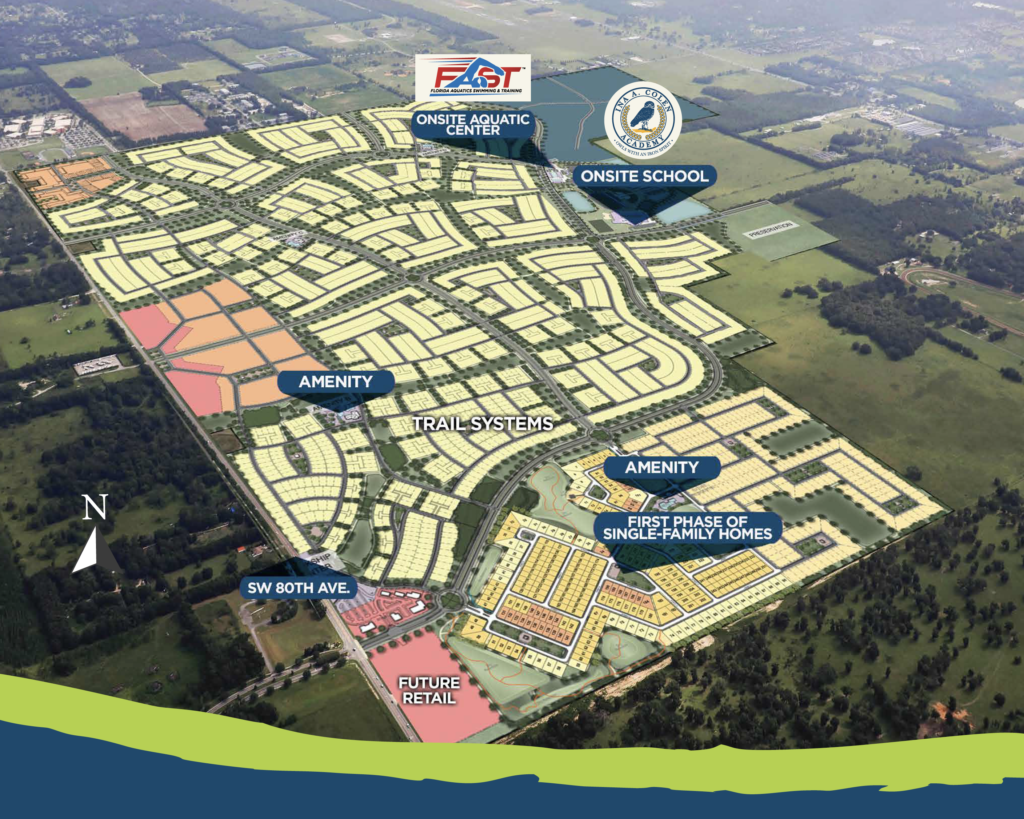 Calessa Township will be a collection of 19 neighborhoods with an estimated 5,000 homes. Construction on the first neighborhood is expected to begin in January 2021. The development will feature extensive outdoor and recreational facilities and activities. Courtesy of Colen Built Development.

It is clearly a departure for the Colen family, who started developing neighborhoods in the 1947 in St. Petersburg. Those first developments were family oriented. But the family made its name with its first On Top of the World community in Clearwater, and later the one here in Ocala. The brand was so successful, today the family business is the largest privately owned housing development concern in Florida.

So why the pivot from their signature brand, “active living retirement communities,” to one that is geared to families with children?

“Because there’s demand in the market for it,” Kenneth Colen, president of Colen Built Development, said matter-of-factly. “I think we can do a good job of developing a community with cohesion between neighborhoods.”

Now, while Calesa Township is being marketed as a family oriented community, it is open to residents of all ages. Linda Massarella-Aiosa, executive vice president of marketing and technology communications for On Top of the World Communities, said while the target market is families with children, she believes Calesa Township will attract senior citizens as well, especially grandparents looking to live near or with their children and grandchildren. Some homes, she said, will be designed to be multi-generational, a growing trend in 21st century housing.

Yet, who will be living in Calesa Township is just part of what makes it different among major Marion County housing developments. 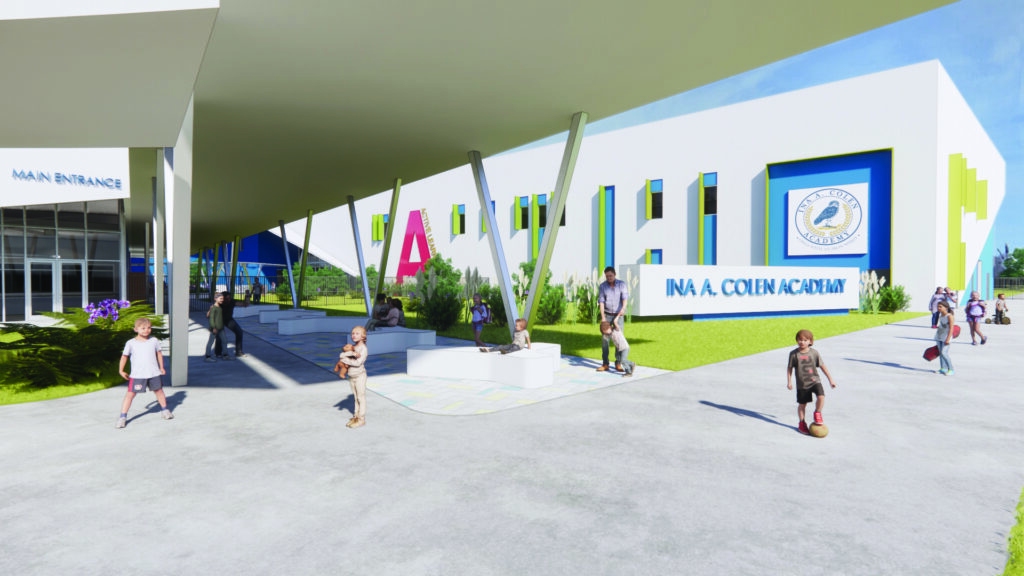 The Ina A. Colen Academy, shown above, will be a public charter school within the Calesa Township development. The school will focus on “exploration” as a means of learning. Courtesy of Colen Build Development.

The community will also feature the Ina A. Colen Academy, a public charter school named after Colen’s mother, a teacher, that will focus on “social emotional” learning. It is expected to open in the fall of 2022 with 215 students. It will add grades each year until it has an enrollment of 1,450 students. Colen said the charter school will encourage hands-on learning and group engagement, and half the seats will be set aside for Calesa Township residents.

“Our program is built around exploration,” Colen said. Ground was broken on the school on Friday.

Beyond just a nice amenity for Calesa, Colen said the $24 million complex will be a community asset that will attract people to Ocala for swimming meets and other events of various sizes, for various age groups. 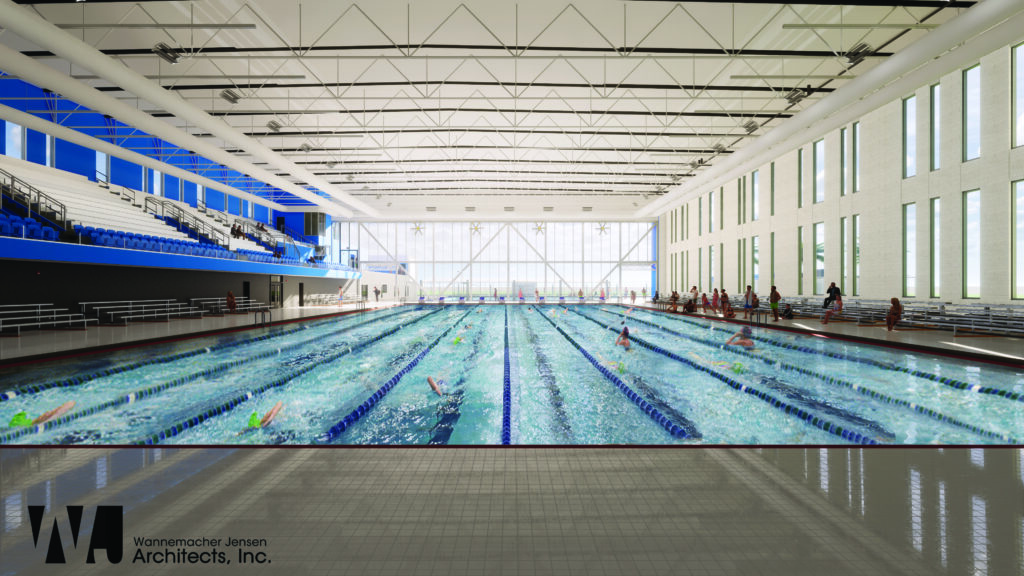 Calessa Township will be a colleciton of 19 neighborhoods with an estimated 5,000 homes. Construction on the first neighborhood is expected to begin in January 2021. The development will feature extensive outdoor and recreational facilities and activities. Courtesy of Colen Built Development.

“For us, it’s a great win,” he said. “I know that when it’s fully operational, it’s going to pump a lot of revenue into the county – tourist tax, sales tax, heads in beds, restaurants and various things.” He said an economic analysis estimated FAST would generate some $182,000 a year in tax revenue for the community.

One final special part of Calesa Township will be the Ocala Tree of Life Sanctuary, a worship center that will be shared by the Temple Beth Shalom (Jewish) and First Congregational United Church of Christ (Protestant). According to a news release about the worship center, the goal is to “commit ourselves to creating a relationship and a facility within which our two communities of faith will share space and conduct our respective and mutual worship, as well as educational, social justice, and artistic endeavors.”

Calesa Township is being designed to encourage engagement with the outdoors. A network of trails and tunnels will connect the 19 neighborhoods. The trails will be different – some paved, some wooded, some rock – and are geared for everything from walking your dog and running to biking and working out. They will connect a series of pocket parks and recreation facilities. The trails will also feature interactive stations aimed at educating, enlightening and exercising. Tunnels will run under the development’s roads as a safety measure.

“It’s to get people to engage, to get outside, to do educational things,” Colen said. 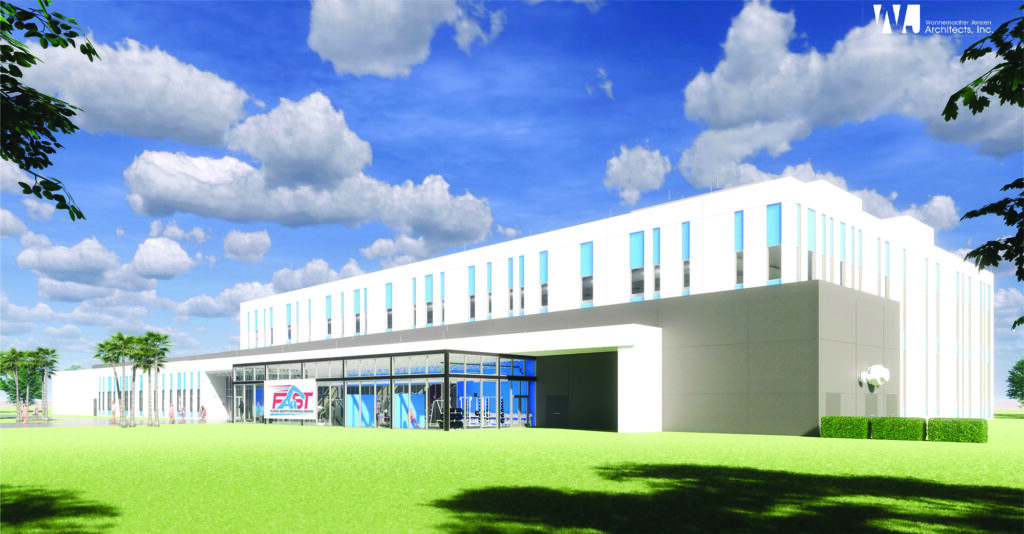 The Florida Aquatics Swimming and Training Center in the new Calesa Township, above, will be available for use by the community – for groups like high school swim teams and those who provide swimming lessons to children. It is part of the development’s focus on health and recreation. Courtesy of Colen Build Development

Colen said he expects to start construction on the first neighborhood in early 2021. Each of the 19 neighborhoods will be priced differently, will cater to a different demographic of homebuyer, with houses starting at about $180,000 and going up from there. The first phase of single-family homes will be located on the property’s southwest corner, closest to On Top of the World.

And who will be the “average resident”? Massarella-Aiosa said “first-time homebuyers, families with young children and older people who want family nearby.”

So how has the community reacted to the news of this massive housing development?

“Just excitement,” Colen said. “This is interesting. This will bring in people. I am optimistic Marion County will be a destination. And a rising tide lifts all ships.”

The assessment appears to be accurate.

Pat Gabriel, the longtime president of the State Road 200 Coalition, has been a longtime advocate for smart growth along the 200 corridor. She sees the uniqueness of the project and the quality of the development as a positive addition to the 200 corridor – “even if it is 5,000 houses.”

“I think this development is very well designed and thought out – as 5,000-home developments go,” she said. “I think it will be an asset to the community.”

Gabriel noted, as did Colen, that plans to develop the property have always been on the boards. It was just a matter of what sort of development it would be.

“It’s logical. It’s well funded. It’s got something for everybody,” Gabriel said.