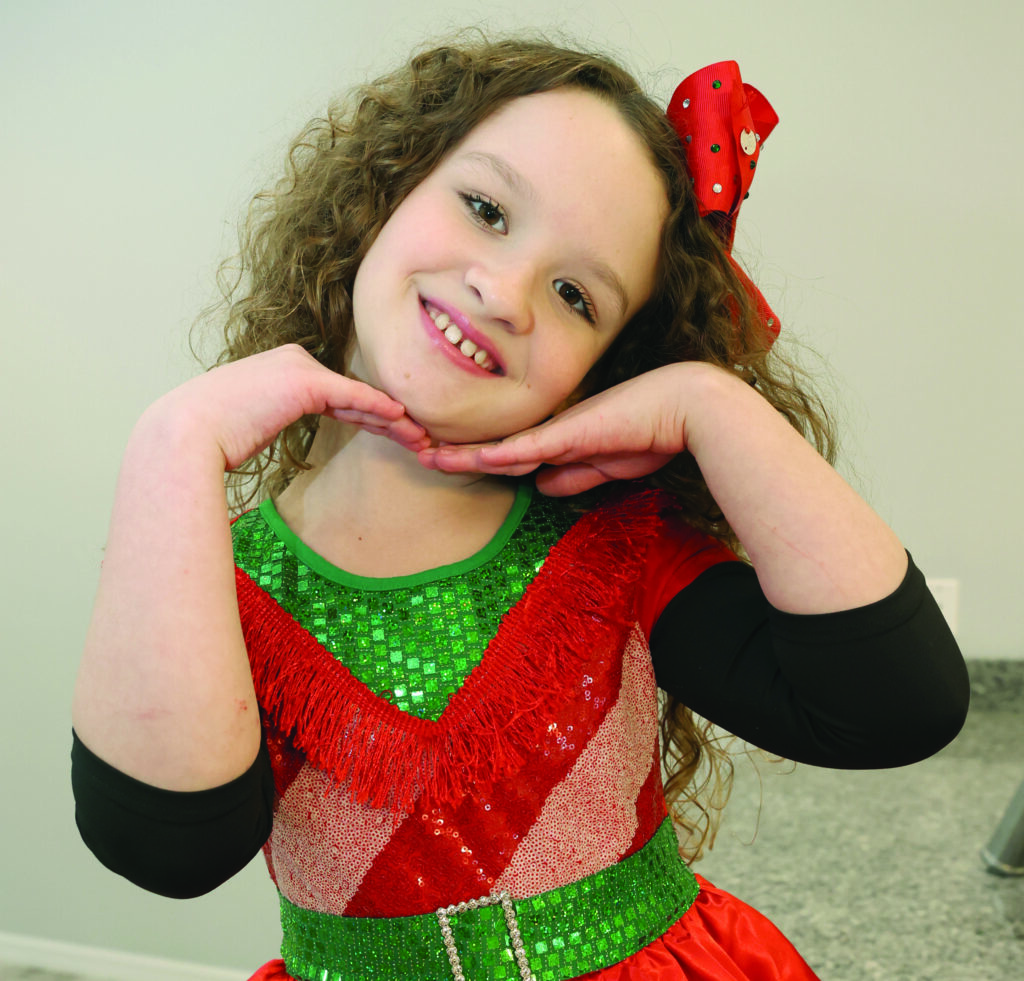 Lena Smith, 9, who was dressed in character as “Jolly,” a perky, toy-making elf, poses for a photo as she gets ready for her virtual Christmas play at her Marion Oaks home on Tuesday, Nov. 17, 2020. Lena will be performing in the play “Santa’s Workshop,” a virtual play, on Dec. 12 that is being produced by the AlphaNYC Theatre Company in New York. [Bruce Ackerman/Ocala Gazette] 2020.

When Lena Smith was 3 years old, she donned one of her favorite costumes, packed her tiny suitcase with a beloved stuffed animal and a blanket, and struck a pose by the front door.

“Goodbye, Mommy. I’m going to the big city to follow my dreams,” she announced. 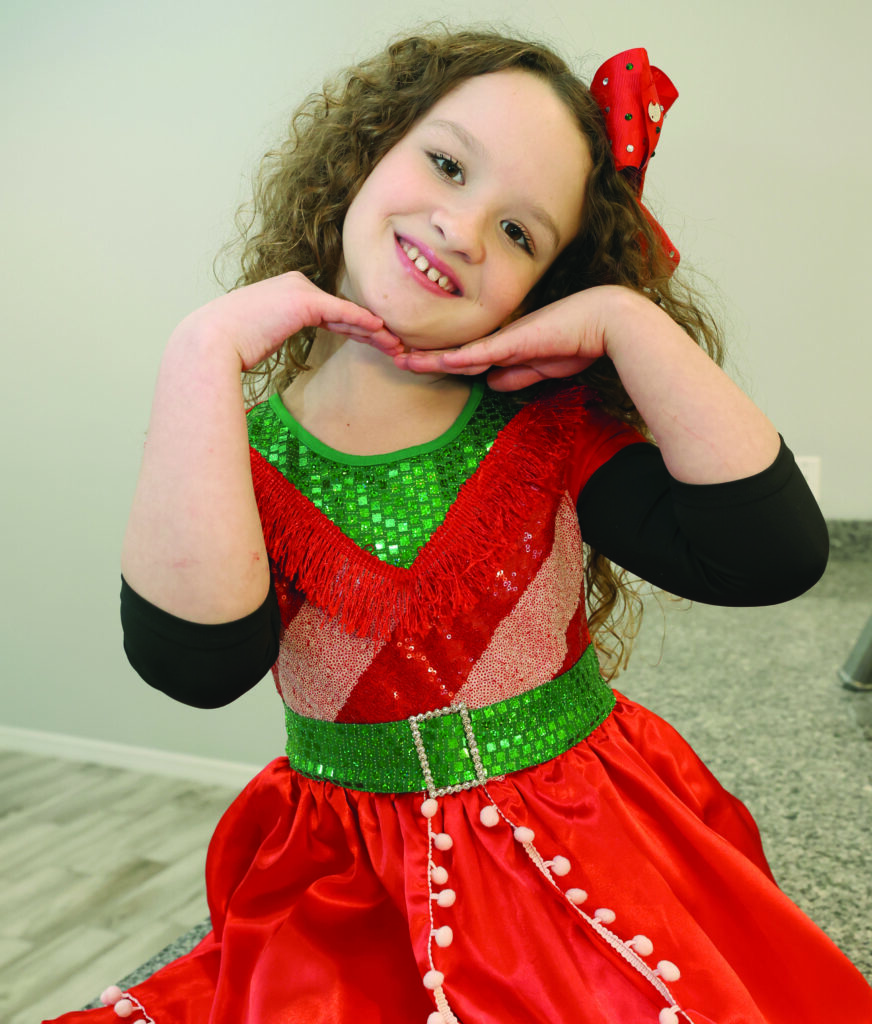 Lena Smith, 9, dressed in character as Jolly, a perky, toy-making elf, poses for a photo as she gets ready for her virtual Christmas showcase. Lena will be performing in the virtual play “Santa’s Workshop’s Got Talent,” on Dec. 12, which is being produced by the AlphaNYC Theatre Company in New York. [Bruce Ackerman/Ocala Gazette]

It was an adorable moment that her mother, Allison Smith, never forgot, though she wasn’t really surprised; Lena had been singing almost since she started talking at 6 months.

Now 9, Lena is preparing to make her off-Broadway debut in The AlphaNYC Theater Company’s virtual production, “Santa’s Workshop’s Got Talent” on December 12.

“I can’t believe I got in!” she enthused about her first role beyond regional venues including Ocala Civic Theatre (OCT) and The Sharon L. Morse Performing Arts Center. She’s playing Jolly, a toymaker she describes as “perky…always happy” and “loves cookies”—which could also describe Lena.

“Her outlet is singing and dancing; that’s her happy place,” Allison explained.

Before COVID-19 precautions shut down in-person dance classes and shifted singing lessons online, the stay-at-home mom was taking her daughter to multiple dance classes, twirling and singing lessons and acting workshops, with frequent outings to Disney on the weekends. The transition to homeschool and isolation was a big adjustment for the super-social third grader. And it came at an already difficult time: In October 2019, just after Lena’s 8th birthday, her father Jeremy died suddenly after a brief illness.

“It was definitely a total shock,” Allison said of Jeremy’s passing of heart failure a week after being diagnosed with an upper respiratory infection and fever. “He was only 39. He was super healthy.”

Their whole world got turned upside down, Allison admitted, but she said her “strong, brave” daughter kept moving forward, staying positive, keeping up high marks in school and channeling her emotions into singing, writing songs and painting ceramics with designs that honor her dad.

“She’s my light,” Allison said. “When you see her on the stage, she shines.”

Lena’s first local performance was in Ocala Civic Theatre’s 2017 production of “The Best Christmas Pageant Ever,” where she also landed her first solo, “Silent Night.” 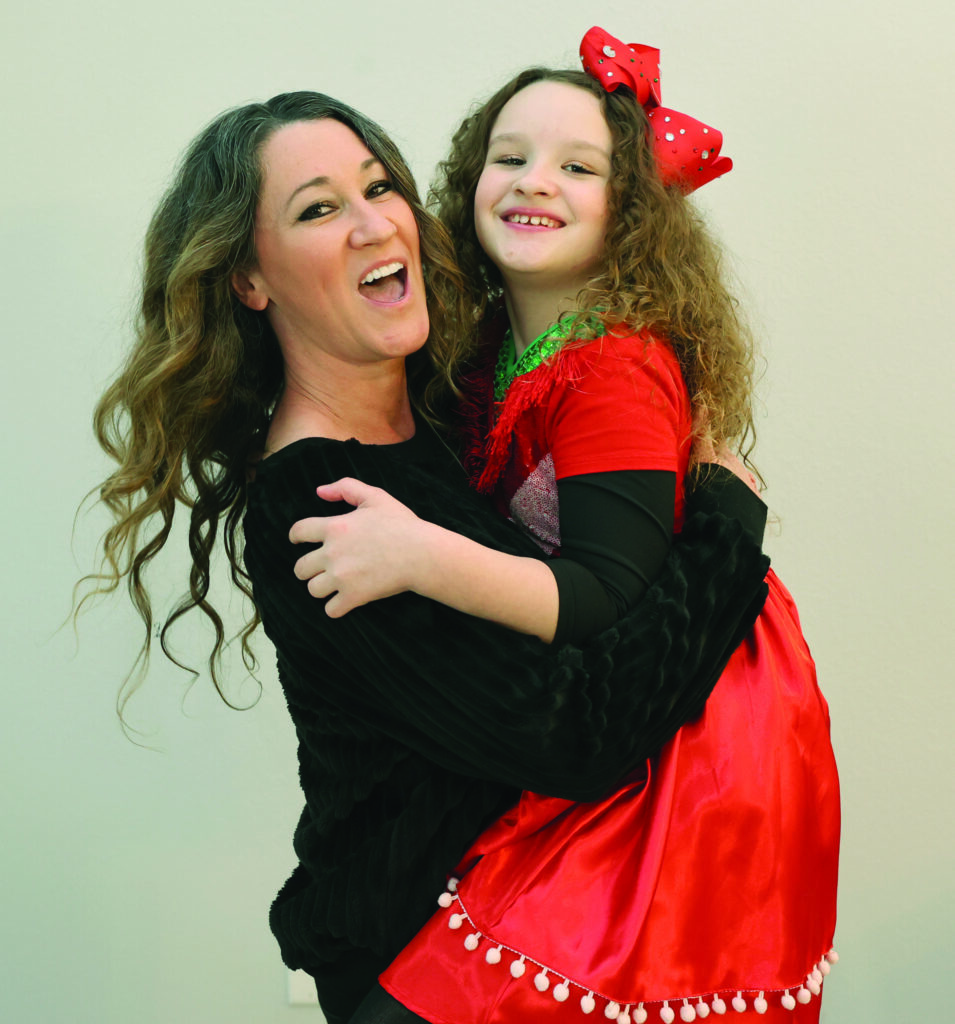 “Lena was an energetic and enthusiastic performer, creative and entertaining in the classroom and excited to perform,” remembered OCT Teaching Artist Melanie Spratt. “When Lena sang ‘Silent Night’ she had everyone’s attention.”

Hospice of Marion County Children’s Program Counselor Amy Rath said she helps children who have lost a parent find hope by expressing themselves in healthy ways that are meaningful for them.

Allison said Lena hopes that sharing her story can let other kids, especially those who lost a parent to coronavirus this year, know “it’s OK to be OK.”

“What do you do when you feel sad?” Allison asked Lena.

“I sing!” Lena replied without hesitation. “Music is my life. I don’t know what I would do without it.”

There will be six online performances of “Santa’s Workshop’s Got Talent.” Lena will appear at 3 p.m. Saturday, Dec. 12, and 1 and 5 p.m. Sunday, Dec. 13. Tickets are available at eventbrite.com/d/online/alpha-nyc/.

Hospice of Marion County offers grief support for children and adults through the Monarch Center for Hope and Healing. Call (352) 873-7456 for more information.