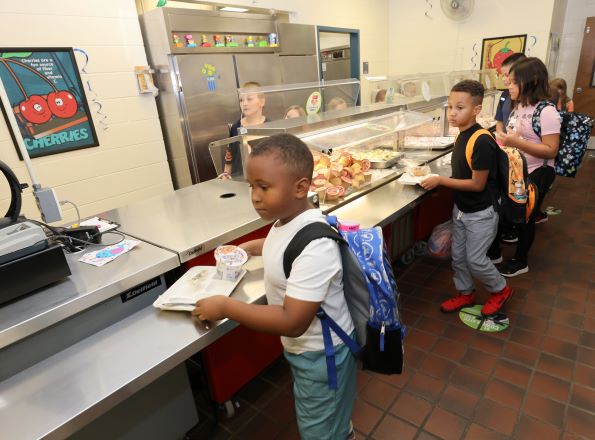 Students get their breakfast on the first day of school at Shady Hill Elementary in Ocala, Fla. on Wednesday, August 10, 2022. [Bruce Ackerman/Ocala Gazette] 2022.

Additional portables have been installed in schools that needed them after the district completed its Annual Portable Building Inspections.

The inspections, mandated by state statutes, identify which portables are non-compliant so that the School Board of Marion County may approve corrective action to fix any portables that must be repaired, decommissioned or replaced.

The addition of these portables at Liberty Middle School and West Port High School could not have come soon enough—the schools are direly overpopulated and were reported to be lacking in the appropriate number of seats for students as shown in the Impact of Growth on Marion County presentation given to the board in May.

“We have identified portables around the district that can be relocated should the need arise,” Dobbins said. “We’ll continue to monitor the numbers, and that is where we are in regards to enrollment and classroom space.”

But it is not only a possibility that the need should arise for more portables—it is almost a certainty. The school board has and will continue to have conversations about the looming threat of overcrowding, as short-term solutions such as portable classrooms serve as the only relief until new schools can be built and existing schools can expand.

“It kind of goes to the greater conversation that has been had over the summer about overcrowding that we have in some schools, and what we’re trying to do to accommodate that,” said Board Vice-Chair Allison Campbell.

Campbell said that while these portables will help the district to have enough room in classrooms for the 2022-23 school year, she recommends that the members of school board have a greater conversation to assess what will happen next as the district anticipates enrollment in its schools to expand.

“We can make all the projections that we want right now, but until we actually have students coming to school and having them in seats, we won’t know what those actual enrollment numbers look like,” Campbell said.

The Gazette reported in May that the current enrollment utilization sits at 93%, with over 42,000 students enrolled across all grade levels in public schools. By the year 2032, the district projects that its enrollment will reach a staggering number of 50,715, an increase of 20.5% in just 10 years.

The addition of portables at the schools that need them most may greatly relieve some strain on overcrowded schools, but only for now, she said. Long-term solutions involving construction have been discussed during meetings between governmental agencies to form interlocal agreements.

“If we were to do something like a changing of zone in any one of our schools, specifically in our overcrowded areas—those are conversations that we need to start in August and September of this year, if we’re thinking about it for next year,” Campbell said.

Board Member Nancy Thrower has continuously been an advocate for working out a consensus in regard to an interlocal agreement. Thrower said that in a district so large, it is crucial that each governmental agency gets on the same page so that they may move forward with long-term planning to ease the strain on school capacity.

“I know the focus has been on our southeast and southwest areas, but our northern areas are over capacity too, and in more than one school,” Thrower said. “It really is going to take all the creative heads at the table and great ideas come from everywhere to alleviate these stress points.”