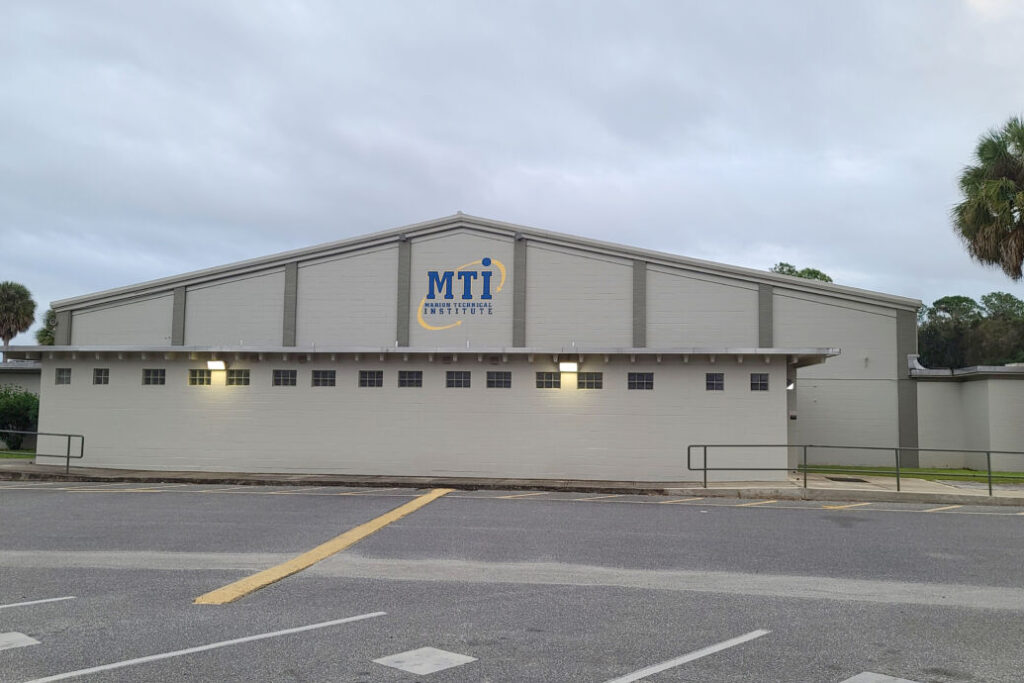 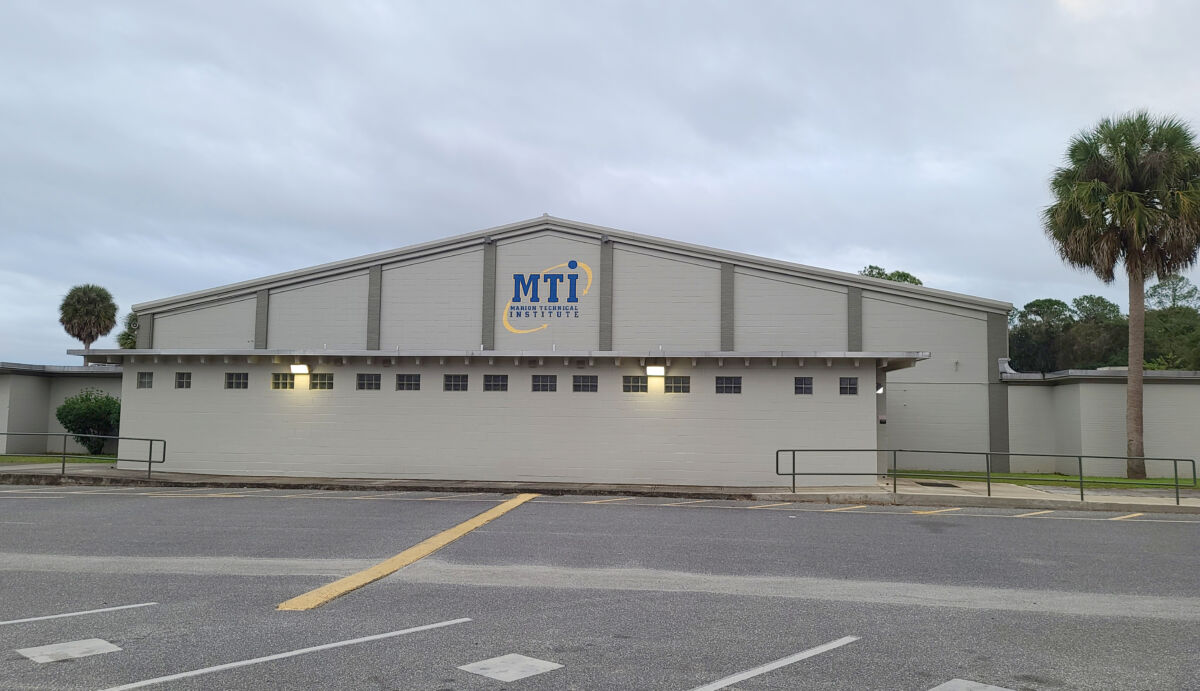 The Marion County School Board (MCSB) was presented with two options regarding the future of the Marion Technical Institute (MTI) during its regular administrative briefing and work session on Dec. 9.

The first option involved the institute maintaining its current operation, continuing its recruiting efforts and managing facility issues as they arose. Option two involved pausing all programs and planning for a new vision for the school.

“How do we revision Marion Technical Institute?” asked Ben Whitehouse, director of Student Pathways and Assessment, during his presentation to the school board last Thursday. “How could we retool it and transition it into something new that will work for the future?”

Collectively, the MCSB directed Whitehouse to collect more findings, including surveys from parents and students, before any decision would be made. But the board said it was open to exploring.

Board member Nancy Thrower said that she wasn’t ready to vote just yet, not till outreach on the issue was conducted.

“I don’t know how we can plan or vote on anything until we hear from the community and the families,” she said.

Ultimately, Whitehouse was directed by the board to present further findings and survey results at the board’s second work session next month on Jan. 20.

Ben Whitehouse was asked at the beginning of the 2021-22 school year to take a hard look at MTI and see if any opportunities existed for changes or improvements for the following school year.

“We spent months evaluating what we were doing on campus,” said Whitehouse. “This was a team effort, involving a lot of people, taking a look at what we offer at this school, and providing some good feedback to the board.”

Established in 2005, MTI was once the old Forest High School campus but repurposed into a technical high school that would provide a focus on Career and Technical Education (CTE) and give students the opportunity to work in some unique learning environments, according to Whitehouse.

In his findings presented to the board last Thursday, Whitehouse said that 78 full-time students are currently enrolled at MTI with 172 enrolled part-time.

Further, MTI had Full-Time Equivalent (FTE), or through state funds, generated $1.03 million from enrollment with $1.5 million in salary expenses. Transportation expenses totaled $693,000. Operational expenses were $150,000. According to Whitehouse’s findings, MTI currently costs the school board a total of $1.3 million.

“I think it’s important to note that when we look at the numbers here that if we’re looking at a typical high school…of our seven traditional high schools, you usually need about 100 students or more to offer a program,” said Whitehouse, “Just because of scheduling. If you have too few students, those students who aren’t in classes are now overloading a class somewhere else.”

Some challenges the school now faces, according to Whitehouse, include duplicated programs, cost of operation, facility needs, low enrollment, and transportation.

“At our peak at MTI, we were roughly 400 students. So, it’s never been a huge program. But we have struggled over the last few years to try and keep those numbers up,” explained Whitehouse, pointing out that most other area high schools offer the same programs that MTI offers.

If option two was implemented, which is the option Whitehouse recommended, he stated that the Young Parenting program and the ESE Work Study program would still remain at MTI (as well as the daycare program), being that it serves all of the county’s schools and is centrally located.

“It makes sense that if we were to do any kind of revision, we should keep those programs there,” he added.

MTI principal Mike Kelly elaborated on what a new vision for technical institute might look like, describing to the board an integrated curriculum approach that evaluated community needs.

He also described a possible trades academy to offer programs in HVAC, plumbing, electrical and carpentry, and a manufacturing and design academy, offering 3D design, engineering, and mechanical programs.

“MTI was successful in the beginning,” stated Kelly, “But we’ve just outlived it. So, let’s do it again. Let’s get back out there, let’s talk to our community. Let’s talk to the CEP, to the colleges, to CF—what is a career pathway that we’re not doing right now?”

School board member Nancy Thrower’s first thoughts were to the reaction that pausing MTI might have on the community at large.

“It’s important to reassure the public, the parents of students at MTI especially, that regardless of whether we decide to keep MTI open or not, there is plenty of room,” she said. “I think that the district has a done a great job of partnering with the CEP and local businesses…it’s also really important to include our families and citizens…so, as we continue to take steps, I would like to see more outreach.”

Thrower continued, “Just because a program is expensive within reason, it doesn’t mean that it doesn’t serve or meet a need,” adding that she’s a big fan of surveys and would like to see some done.

Board vice-chair Allison Campbell wished to know why students choose to enroll at MTI and suggested a survey could help answer many of her questions.

“This isn’t just some fly-by-night program that we did for three years and said, ‘Oh, we don’t like it anymore,'” she said. “Our community is growing and changing, so it’s good to have this conversation.”

Board member Don Browning said he liked the idea of exploring and the potential for new scholarship, but that it needed to happen within the community first.

“Advocate from both of these positions,” encouraged Browning to Whitehouse and Kelly, “Keeping it going [or not]. Think about it from the position of a student—because everybody is talking about this. It’s a big deal. So if you could advocate on one side and advocate on the other—keeping it going or moving it out—I need to hear that. And I need you to know that everyone in the community is listening to you.”

Board member Kelly King acknowledged that the world in which MTI first opened has changed and so should the board’s perspective on how the institute might need to change to meet the needs of today’s community.

Said King, “Just because a thing has been a way for 15 years doesn’t mean that it’s right and good for us anymore.”

Board chair Eric Cummings expressed apprehensions that if the closing of MTI happened too fast, costly mistakes could be made.

“And if we’re going to do what’s best for the students,” he concluded, “we’re going to have to make sure that they are getting the same equity and accessibility to the programs that they have had this whole time.”