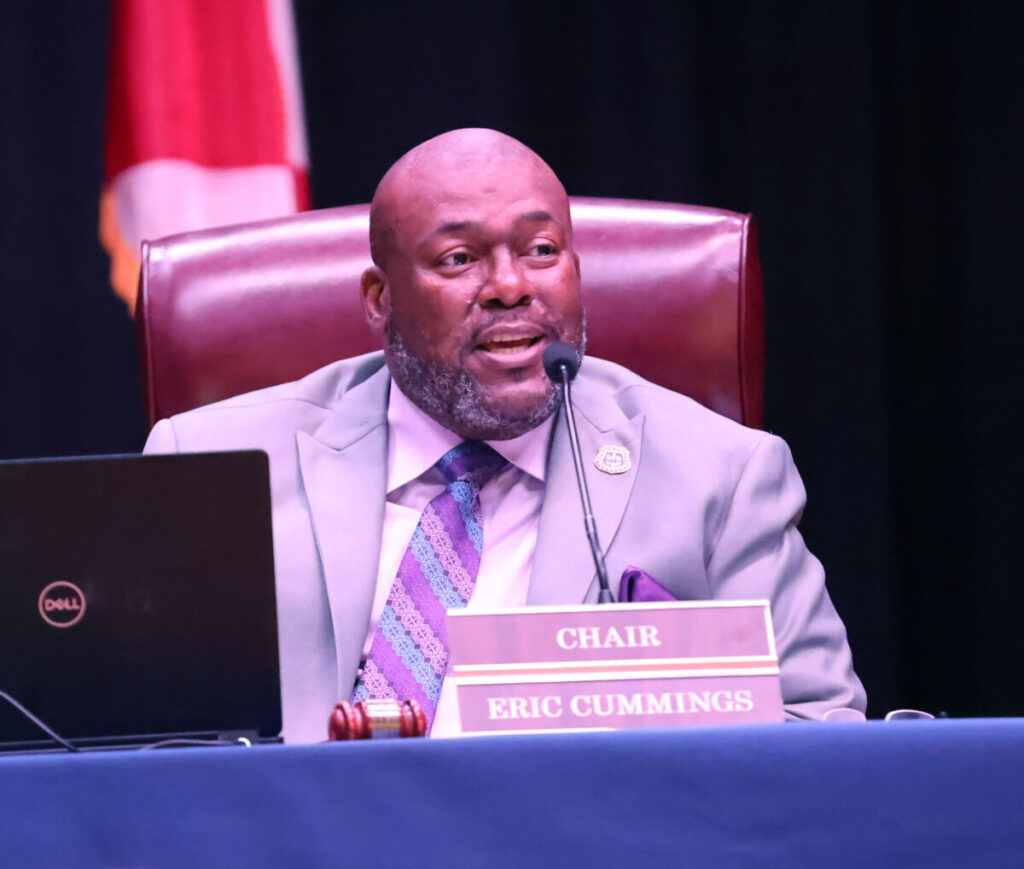 Chair Eric Cummings speaks during a meeting of the Marion County Public School Board at the MTI auditorium in Ocala, Fla. on Tuesday, April 26, 2022. [Bruce Ackerman/Ocala Gazette] 2022.

After Gov. Ron DeSantis proposed legislation to utilize retired veterans and first responders to teach in public school classrooms, one school board member in Marion County questioned why it’s still difficult for members of other fields to become educators.

Board Vice-Chair Allison Campbell raised the issue at the September 1 Administrative Briefing and Work Session regarding the training process for those who have received a bachelor’s degree in a major not related to education. At a time where the district is in critical need of educators, she said she hopes for a way to more easily accommodate anyone who is qualified to teach in a classroom to do so.

“I would like to see adjustments on how that certification for teachers process looks for those [who are] changing careers,” said Campbell. “We have some updates that have been happening with veterans and those that have come forward in recent legislation. What hasn’t changed is the time requirements for those to receive certification…even if they have a bachelor’s or potentially have a master’s degree when it’s not in a subject that is transferrable easily.”

The discussion comes after the governor proposed several incentives for retired veterans and first responders to re-enter the workforce and ease the strain of a statewide teaching shortage. The proposals include incentives of fee waivers and bonuses, apprenticeship programs for those with associates degrees and a scholarship program for teachers of dual-enrollment courses, according to the governor’s office.

For teaching candidates with a degree in education or the certification area desired, once the candidate passes all examinations and training necessary, they receive a certificate that may be renewed every five years. By comparison, someone who wishes to change careers to become an educator or who wishes to teach after earning a degree in a different subject matter will earn a three-year nonrenewable initial temporary certificate, according to

While the board discussed opening pathways for out-of-field educated candidates to become certified, some members expressed that they in no way want to lower the standards for teaching certifications.

“I don’t ever want to minimize the work that our teachers have done and what they’ve done to become certified teachers,” said Board Chair Eric Cummings. “There’s a shortage of qualified people being in front of our students and being out there in the classroom. I don’t want to just ‘put the book out there,’ but I think the state has the ability to open up some pathways to get people in the classroom.”

Board Member Nancy Thrower said she has personal experience with being hired as an educator after coming from outside of the field of education. Thrower received degrees in equestrian studies and psychology from Lake Erie College then pursued a career in education in 1997. She then worked at North Marion High School as a paraprofessional until she became certified to teach full time.

“There’s a lot of value to bringing people into the field of education who have had deep and meaningful experiences outside of education,” Thrower said. “Education is not confined to a school or into a classroom, so I can see the value of that.”

Thrower speculated that even if the district is able to recruit out-of-field teachers, there is a chance that they may not stay for very long due to their salaries. As per the 2021-2022 school year, the minimum starting salary for a classroom teacher in Marion County Public Schools is $47,500 for a 196-day instructional contract, according to the Collective Bargaining Agreement between the Marion Education Association and the School Board of Marion County. Labor unions and teachers’ advocates are attempting to introduce legislation to combat issues with salaries so that both recruitment and retention rates for teachers may improve.

In the previous legislative session, the Florida Education Association (FEA) advocated for teachers to receive fair and competitive pay, earn multi-year contracts and reduce high-stakes standardized testing for educators, according to the FEA.

Both Marion County and the state of Florida have had trouble getting teachers to stay in their positions year after year. The current retention rate for educators in MCPS is 85.18%, according to district spokesperson Kevin Christian.

Thrower said she believes opening pathways for paraprofessionals to become certified teachers, just as it has been proposed for veterans and first responders, can help ease a number of these issues.

“A lot of our paraprofessionals are there all day, every day that the kids are there. Then they might have families of their own and kids of their own,” she said. “To embark on the journey to become a teacher is definitely a commitment of time, talent, energy and money.”

As for now, decisions are out of the board’s control. In order for out-of-field candidates to be allowed the same pathway and timeline as what has been proposed for veterans and first responders, changes must be made by the FLDOE, according to Campbell.

“We have to wait on the legislature to actually make the changes to allow us to do what we’re asking, because it would be a Florida Department of Education process that has to change,” Campbell said.

The school board will make its recommendations to the Florida School Board Association for what it should take on as a statewide priority. The recommendations will be finalized in a meeting on October 7, in which the SBMC may suggest that the state needs additional pathways for other out-of-field teaching candidates, Campbell said.

“If the state is going to be looking at our military veterans, they have similar experiences and [the state] gives credit for that. Our paraprofessionals would certainly fall into that category, and it could be an even better alignment,” Thrower said.

Thrower added that it’s time for the school board and the district to develop more creative solutions and that it’s crucial they act to recruit and retain qualified teachers who will uphold the educational standards of Marion schools.

“We need to do what’s right for our community because having great schools is just what we need to have,” she said. “That’s nonnegotiable.”