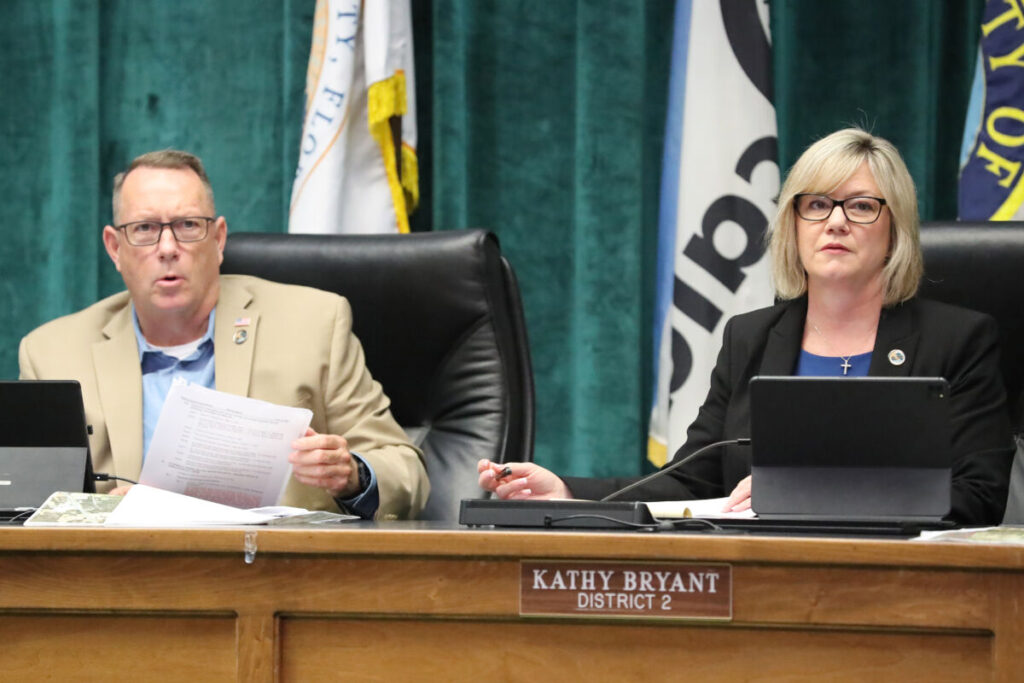 The billionaire owners of the World Equestrian Center in Ocala Tuesday won approval from Marion County Commissioners to build a second venue in the county’s Farmland Preservation Area (FPA), despite county staff recommending its denial and objections from a slew of adjacent property owners and nearby citizens.

In three back-to-back 3-to-2 votes during a sometimes tense nearly six-hour meeting, Commissioners voted to adopt both a future land use map amendment and associated text amendment to its Comprehensive Plan, which then allowed them to subsequently vote on and approve a Planned United Development (PUD) application from Golden Ocala Equestrian, LLC., owned by Larry and Mary Roberts.

“This is a very unusual developer that’s not short on funds,” said Curry prior to the vote. “If we allow it, it’s going to blow that place up; it’s gonna have a tremendous negative affect.”

The adoptions and approval, which rezoned the 1,029-acre property from mainly agricultural to PUD means Golden Ocala can now proceed with plans to build 94 homes, a 100-site RV park, 9,000-seat stadium, 120,000-square foot of retail space, polo fields with clubhouse and a fuel station on the site of the WEC Jockey Club site, formally the Ocala Jockey Club.

“It’s disappointing; but we’re happy the developer made some concessions and are hopeful something good will come out of this,” Jerome Feaster, founder of Save Our Rural Land (SORA) said Wednesday. Feaster spoke out against the project during the meeting, along with attorney Ralf Brookes, who represented several neighbors of the Jockey Club.

“If the rezoning request is approved, all of Marion County could become devoid of its greatest asset, the farmland that makes Marion County the Horse Capital of the World,” Feaster said during the meeting, which drew a capacity crowd of nearly 250 people.

The property is located within the county’s Farmland Preservation Area (FPA) and outside its Urban Growth Boundary (UGB), and is located on rural-two lane West County Road 318, about 2.7 miles west of I-75 in the community of Irvine in unincorporated northwest Marion County.

Many in the audience, like Feaster, pleaded for the Commissioners to protect the rural integrity of the FPA, as well as its wildlife, environment and water resources. Many questioned the fairness of allowing the developer to build 94 homes on three-acre or more sites, when the county requires ten-acre home sites within the FPA.

Others questioned the need for a 9,000-seat stadium, which is large than WEC Ocala’s stadium by 1,000-seats.

Damian Guthrie, who said his property was now surrounded by WEC, said, “I guess all we ever wanted was a seat at the table, but I just feel that neighboring properties and adjoining property owners were never really given an opportunity to sit down with the applicant.”

Another resident, John Nolan said: “We don’t need another WEC facility in Reddick,” “What we need is beautiful farmland so that the kids and people that have never seen beautiful country can drive through and enjoy it.”

Golden Ocala’s original application called for a 200-room hotel on the site, but it was eliminated after Commission Chair Carl Zalak III told Golden Ocala’s representative, attorney Jimmy Gooding, that it was, “part of the non-starter issues we have.”

“I would like for you to talk with your client and see if we can remove this hotel,” said Zalak. “I think it would give the community a whole lot of peace of mind.” Audience members then broke out in applause.

Gooding later confirmed the hotel was off the table but commissioners agreed to let the developer retain the existing clubhouse on the property for use as meeting space and a restaurant. The developer also reduced the size of its entrance sign by nearly half prior to the meeting, and made some other concessions in an alternative PUD application.

Tracy Straub, Assistant County Administrator, Public Works and Growth Services, outlined several traffic and road impacts the development would have on roadways, particularly County Road 318, and its 1964-era interchange at I-75, County Road 225 and others.

Most of the roadways would need to be widened or improved, with turn lanes and access points added, Straub said citing a traffic study that was conducted as part of the county’s review of the application.

“We recommend the developers pay their proportional share of the impacts,” she said. “It is important to know that Sunny Oaks (a recently approved PUD development at I-75 and County Road 318) and Ocala Jockey Club will be required to make their own access improvements.”

Total road improvements would cost more than $60 million, and the developers would foot the majority of the cost. Widening 318 would require the use of eminent domain, which allows a government entity or an agent to obtain private property for public use, with compensation.

Gooding, and David Tillman of Tillman and Associates, who also represented the Roberts family, disagreed with the traffic study, saying it, “dramatically overstates the potential impact of our project.”

Gooding said the sight will be a rural WEC and, “not a concert central for North Central Florida or anything.”

“We like rural settings. Horse trial three-day events occur on large pieces of property, not with fancy dancy restaurants and high-end Hermes saddles and all of that…. That is a pristine farm, and you’re going to screw it up,” she said

Commissioner Curry said he was opposed to the development near I-75.

“Not just this project, but any project, I’m going to be opposed to it,” said Curry.

Commissioner Bryant, who is up for reelection in the fall along with Zalak, said she concurred with everything Curry said.

“Once you do this, you’re going to have serious issue with 318 and 75,” she said. “We’ve sat up here long enough and we’ve all have learned as fast as our community is growing right now how important it is to have infrastructure in place when you’re talking about development.

“I’m not going to be able to approve this,” she said.

Several people who spoke asked Bryant and Zalak to recuse themselves from voting on the issue because they’ve recently accepted thousands of dollars in campaign contributions from the Roberts family.

But County Attorney Guy Minter said it was not illegal and not uncommon for public officials to vote on matters related to donors. Neither abstained from voting.

Golden Ocala is required to submit a master plan for approval, as well as a developer’s agreement on water, sewer and roadway improvements within 6 months.