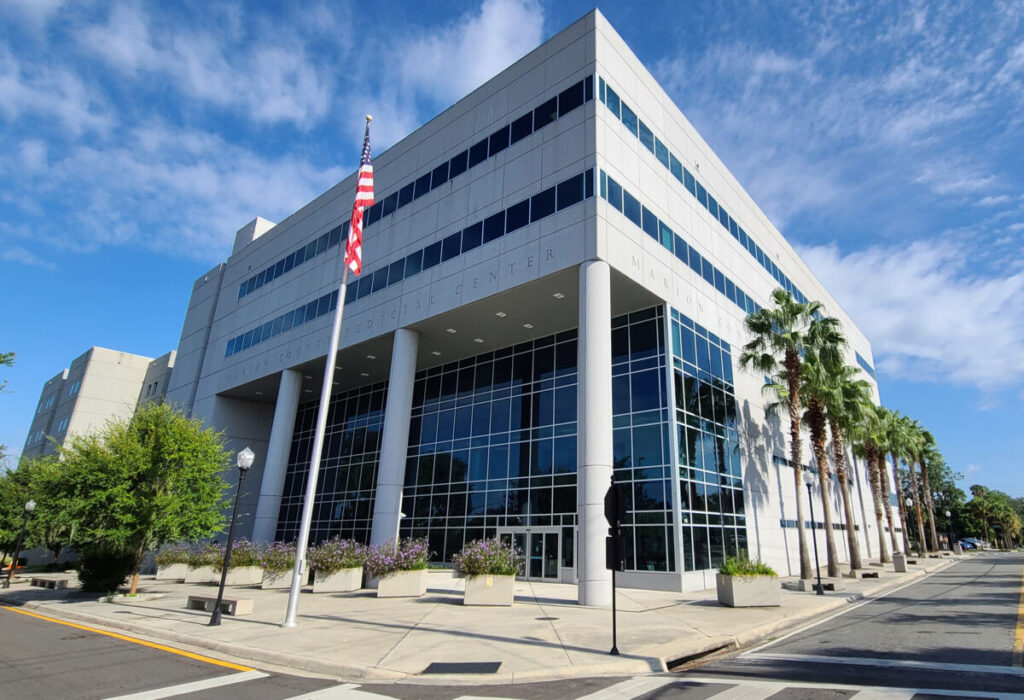 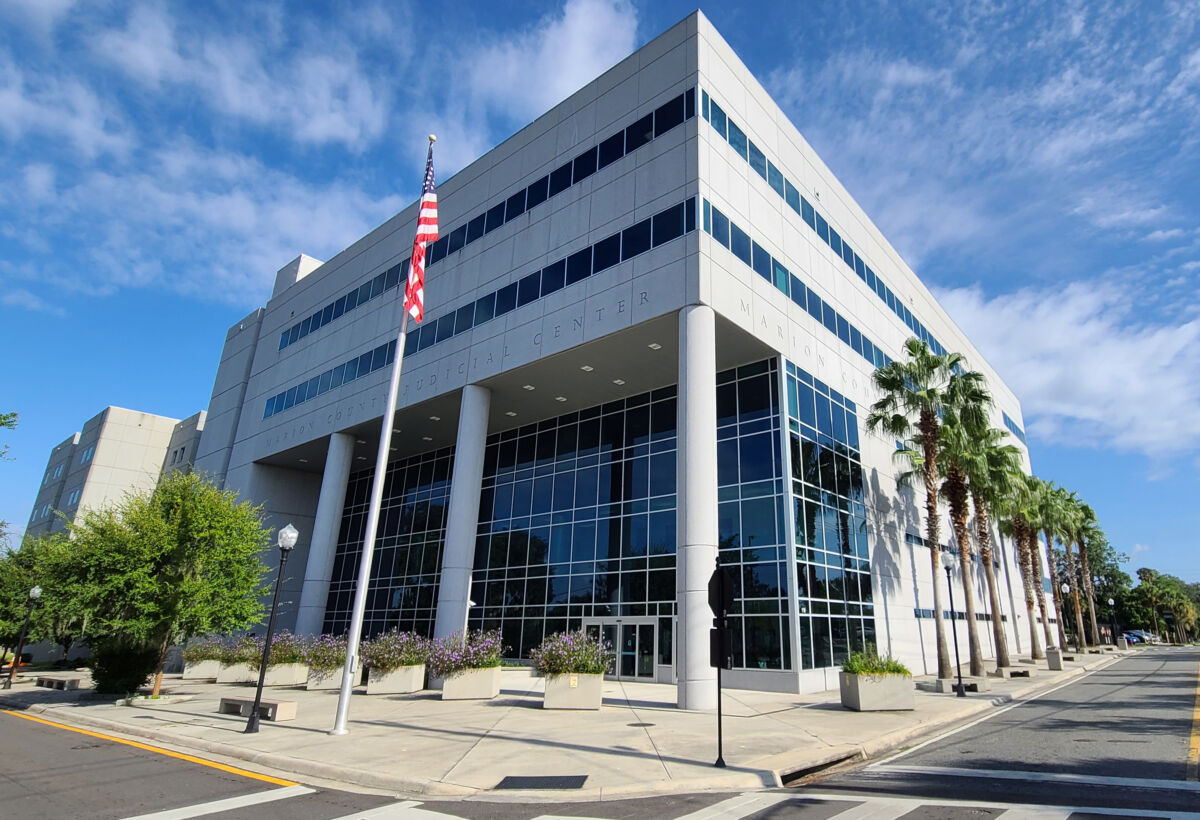 In this file photo, the Marion County Judicial Center is shown in Ocala on August 5, 2020. [Bruce Ackerman/Ocala Gazette]

Marion County’s sizeable probate and guardianship dockets are currently short a judge, and in the case of guardianships: facing additional scrutiny by the Clerk of Court’s office.

Due to the recent retirement of Judge Sue Robbins, as of Oct. 31, and Judge William H. Hallman III, effective Dec. 31, as well as judicial reassignments throughout the Fifth Judicial Circuit, the judicial shortage affecting the probate and guardianship dockets has become more acute as of late. The Fifth Judicial Circuit includes Marion, Citrus, Sumter, Hernando, and Lake counties.

Faced with being short one judge, Marion County Administrative Judge William R. Hodges had to prioritize the dependency delinquency docket left vacant with Robbins’ retirement because cases involving children who might be in crisis “are on the top of the list of priorities set by the Supreme Court,” said Hodges.

“And due to the nature of those cases, the Supreme Court requires judges with experience handle the docket- so it’s not like I can’t just assign any judge.”

Hodges currently says that docket is also on rotation split between several judges with that experience. Judge Youmans (who still splits her time between Sumter and Marion counties) presides over it on Monday, Judge Stancil presides over it on Tuesday, Judge Hatcher Wednesday and Thursday, and Ann Melinda Craggs on Friday.

Getting a replacement judge

When judges retire early, rather than host a special election to replace the judge, a judicial nominating committee, prompted by the governor, recommends a handful of suitable candidates for appointment.

The Office of the Governor issued a letter, dated Sept. 28, to the chair of the Fifth Judicial Circuit Judicial Nominating Committee (JNC), Shanta Matthews, tasking the committee with selecting and submitting the “names of highly qualified for lawyers” to fill the judicial vacancies to the governor.

The initial deadline for the JNC to submit their recommendation to the governor was Oct. 29, but Matthews said it was extended to Nov. 18.

Twelve lawyers applied for consideration. The JNC will hold interviews on Nov. 16 and then immediately deliberate their recommendations to the governor to meet the Nov. 18 deadline.

Recently, in the case of the appointment of Lori Cotton to fill the judicial vacancy following the retirement of Sarah Ritterhoff, this same JNC recommendation and governor appointment process took approximately a month.

As it stands now, Hodges expects to be short a judge at least 60 days and created a plan with the goal to “get through to January.”

Hodges’ plan includes having eight circuit judges take one-week rotations to address the needs of the probate and guardianship dockets while handling their regular caseloads. Hodges felt that this arrangement would result in lawyers getting their requests answered usually within a week.

This means that rather than working with one judge assigned to a matter from beginning to end, a petitioner or their attorney would set hearings or submit requests for relief to whichever judge is assigned to that docket for a particular week.

While it’s not uncommon for judges to be assigned multiple dockets, the number of probate and guardianship cases in Marion County are substantially more than what Citrus or Sumter counties have.

As of Nov. 1, Marion County had 2,899 open guardianship and probate cases, whereas Citrus and Sumter counties each reported a little less than 1,000.

Annually, Marion County’s guardianship and probate filings are more than twice that of Sumter and Citrus counties.

In addition to the shortfall of judicial appointments, the guardianship docket faced other challenges as well.

The Clerk of the Court is responsible for reviewing guardianship accountings and informing judges whether the filings meet statutory requirements. That office has also had significant changes this year.

To start, long term Clerk of Court, David Ellspermann, retired, and Gregory Harrell stepped into the role at the beginning of the year.

According to Katie Hunnicutt, spokesperson for the Clerk of Court, the department within the Clerk’s office that handled the guardianship cases experienced the retirement of one staff member as well as the resignation of another who left for the private sector this year.

The departures of those employees “provided us with an opportunity to reassign various tasks and responsibilities within the department,” said Hunnicutt.

However, Hunnicutt pointed to the other challenge: guardianship cases facing increased scrutiny due to fraud.

In a Sept. 27 report by the Florida Bar Association, a task force, created by the Florida Court Clerks & Comptrollers, took a “closer look at how hospitals and nursing homes pursue guardianships for patients” as well as explored ways “to allow judges to order an independent investigation of a guardianship, using supportive decision making as an alternative to guardianships, and setting up a public statewide database on professional guardians that would include the number of cases they handle and disciplinary history.”

That task force issued recommendations following its final meeting on Sept. 23 that included, among other things, a more uniform system for reporting and additional guardianship monitoring options for judges to utilize.

As a result of the task force recommendations and in anticipation of the task force’s full report, Hunnicutt said that the clerk’s office has tasked a certified accountant from their finance department “to assist with the statutorily-mandated review and audit of accountings prepared by attorneys and professional guardians.”