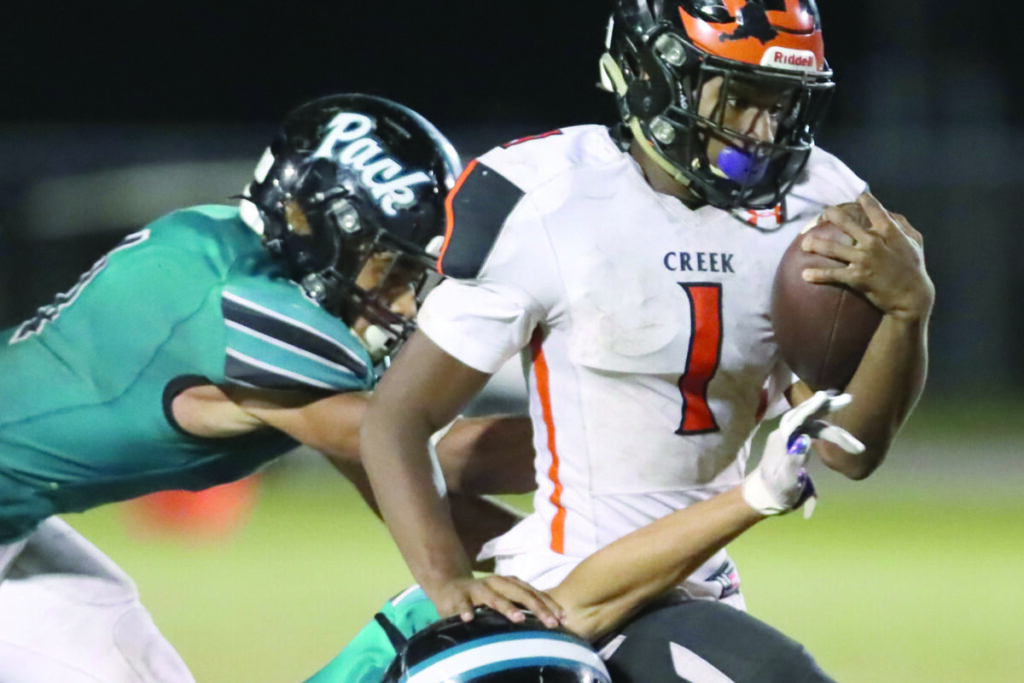 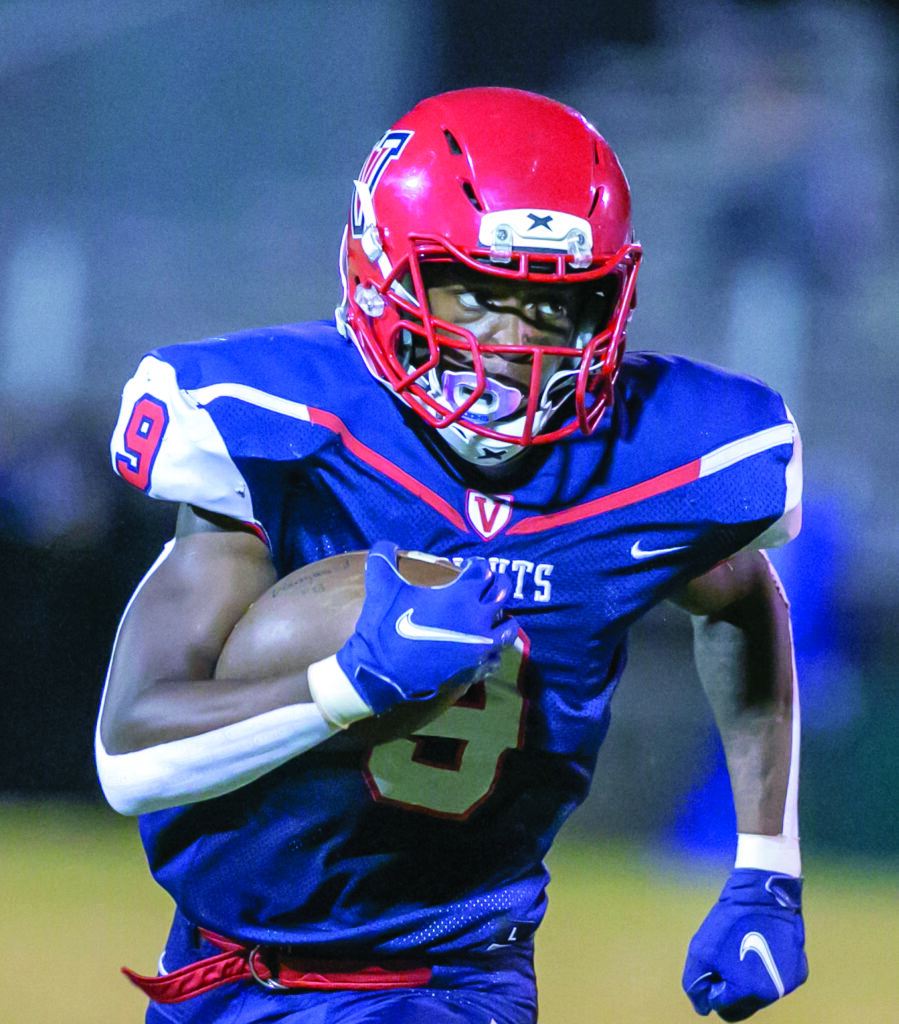 As the only undefeated team in Marion County, Dunnellon continues to push forward with a victory over fellow county team North Marion. That means North Marion’s 2020 season comes to a close while Dunnellon moves to the semifinals.

Vanguard topples Ridgeview and moves to the semifinals. The Knights improve to 7-1.

Trinity Catholic dominates over Taylor, improving to 6-3, and progresses to the region final round of the state bracket.

Here is a closer look at last week’s post-season play:

Having stomped North Marion in the regular season 32-8, the Dunnellon Tigers walked on the field last Friday with plans of a similar outcome. North Marion, however, did not intend to go quietly. And, although the Colts put up a good fight, in the end they were forced to accept defeat. The win pushed Dunnellon to 8-0.

On the ground, the Tigers were led offensively by Demetrius Mccants with 33 yards rushing, followed closely by Trent Townsend, who added an additional 30 rushing yards. On the receiving end, Christiaan Fashaw had 42 reception yards with Le’Var Fitzpatrick adding another 35 yards in the air.

North Marion put seven on the board in the first quarter, as did Dunnellon. The game was then primarily defensive until the fourth quarter, when Dunnellon was able to add six. The Tigers missed the point after bringing the score to 13-7, which would remain the final score of the game.

Although Dunnellon got the win, the Tigers struggled to score, with three trips to the red zone ending in zero points. While Dunnellon’s offense fought to put points on the board, their defense stood strong with two interceptions, one by Fitzpatrick, returned for 33 yards, and another by Julius Gardner.

Dunnellon’s defense was able to hold the Colts to only one touchdown with an incredible 54 total team tackles on the night and constant pressure on North Marion’s quarterback. Contributing to the formidable defensive stance were Avery Braden (nine total tackles), Eleazar Quetant (seven total tackles, two sacks) and Arrieon High (six total tackles). In addition to the two sacks by Quetant, the Tigers had three more sacks against the Colts with Shai’hem Thomas, Colby Smith and Douglas Fowler each contributing one.

Reflecting on the hard-fought win, Head Coach Price Harris commented: “The name of the game from here on out is win and advance. North Marion played extremely hard last Friday and had a good game plan against us. Our hats are off to how well they played. With that being said, we cannot turn the ball over and miss opportunities to score. At this point, find a way to win is all that matters.”

Vanguard, having lost only to Dunnellon in the regular season, looked across the field at the Ridgeview Panthers with the intention of sending them back home to Orange Park with their heads hanging low. The Knights did just that.

Winning the coin toss, Vanguard deferred until the second half, giving Ridgeview the ball to start the game. On Ridgeview’s opening drive, Vanguard’s Emile Sancho set the tone with an interception; however, Vanguard was unable to capitalize on the turnover and was forced to punt. 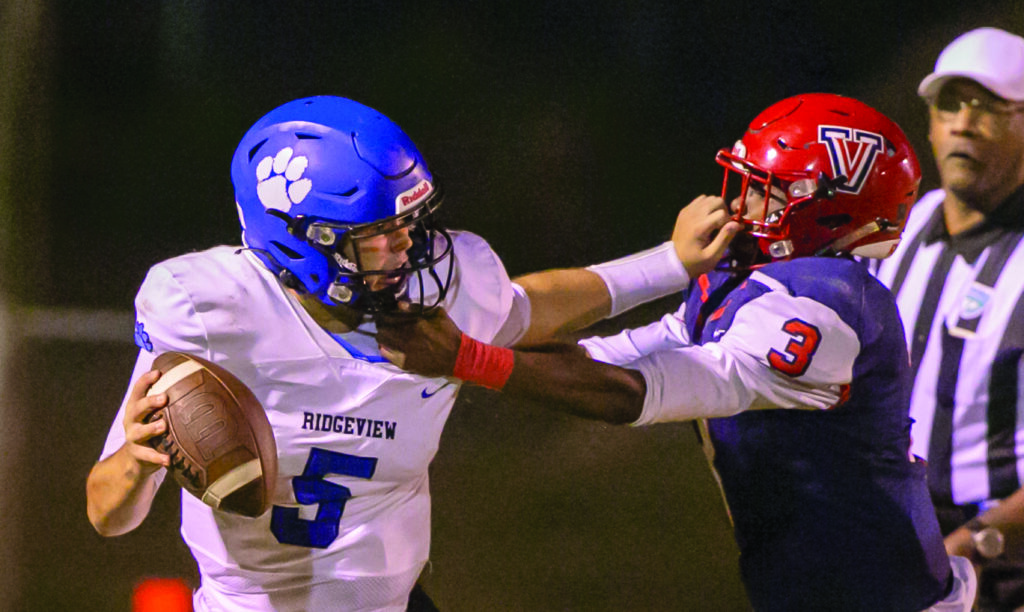 Ridgeview’s Max Monroe (5) and Vanguard’s Jordan Woods (3) tangle with each others face masks. Only Vanguard was called for a face mask violation as Vanguard High School shut out Ridgeview 35-0. [Alan Youngblood/Special to the Ocala Gazette]

Vanguard continued to hold off the Panthers throughout the first quarter and, with three minutes remaining, Mykel Randall rushed for 7 yards putting the six on the board for Vanguard, followed by a successful extra point by Grandin Wilcox.

From that point forward it was all Vanguard, scoring 14 in the second quarter and another 14 in the third quarter.

Putting touchdowns on the board for the Knights in the second quarter were Alexander Law, with a 27-yard completion to Trevonte Rucker, and Ronald Leslie-Farmer, with a 1-yard rushing touchdown. Wilcox sent two additional extra points through the uprights, making the score 21-0 entering the half.

At the initiation of the third quarter, Tevin Williams rushed for a 9-yard touchdown, bringing the score to 27-0; point after good; score 28-0.

Vanguard’s defense continued to stand strong, again forcing Ridgeview to punt. The Knights capitalized, ending their drive with a 5-yard rushing touchdown by Randall. Wilcox added his fifth extra point of the night, giving the Knights the final point of the night and a score of 35.

With neither team scoring in the fourth quarter, Vanguard walked away with a decisive victory over the Panthers and progresses to the semifinal round of the state bracket.

Although West Port worked hard this season to get back to the gridiron and did so with some tough wins and a strong defense, the Wolf Pack unfortunately was outmatched by the Hawks of Spruce Creek out of Port Orange. West Port’s record drops to 4-3 and their 2020 season comes to a halt. 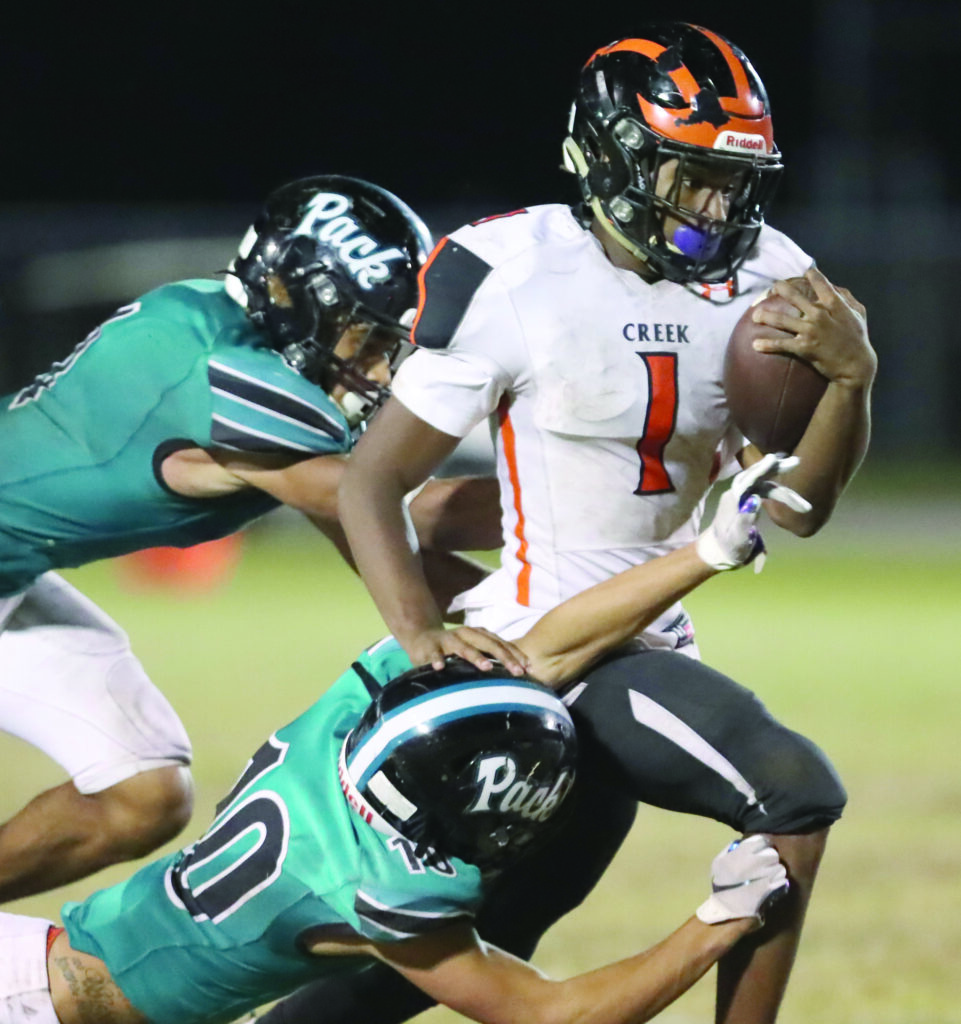 A simple review of records revealed that the matchup between Trinity Catholic and Taylor would be a close bout. Trinity was well prepared and blanked Taylor, giving them a season ending record of 6-4. Trinity, in turn, improved to 6-3.

Trinity Catholic will continue forward in the playoffs with home-field advantage as they look to take on John Carroll Catholic of Fort Pierce. As the Rams of John Carroll have a current record of 9-1, Trinity will have their work cut out for them as they prepare for this week’s game. The Celtics, currently ranked 87th in the state above John Carroll at 95th, have every intention of upsetting the Rams and progressing in the state bracket.

Dunnellon, currently ranked 98th in the state, draws home-field advantage as their fans eagerly await the 5-5 Falcons from Menendez High School out of St. Augustine. Notably, one of Menendez’s five wins came with a victory of 28-3 over Eastside, who Dunnellon beat 50-0 in their first playoff game. While Dunnellon is keeping their nose to the grindstone in preparations for Friday’s game, whether the Tigers win by 50 or one, they intend to get the W and advance to the final four.

Vanguard will again have home-field advantage against Clay High School out of Green Cove Springs. Although the Blue Devils have a formidable record at 9-1, they are currently ranked 122nd in the state, while Vanguard is ranked 104th. Coming off a dominating win over Ridgeview, Vanguard hopes to move into the final four, where they will face the winner between Dunnellon and Menendez.