So different, this man 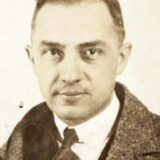 William Carlos Williams was born in Rutherford, New Jersey, in 1883. The poet, novelist, essayist and playwright is often said to have been one of the principal poets of the imagist movement. His major works include “Spring and All” (1923); “Pictures from Brueghel and Other Poems” (1962), which was awarded the Pulitzer Prize; the five-volume epic “Paterson” (1963, 1992); and “Imaginations” (1970). Williams died in 1963.