In the late autumn moonlight,

A train droning out of thought—

The mind on moonlight

Blind as a thread of water

Lonely beyond all silence

And humming this to children,

The nostalgic listeners in sleep,

Strides through distance upon distance,

His eyes a web of sleep. 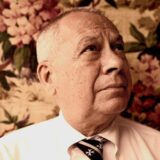