Plans to restore the Hotel Marion pass their first hurdle 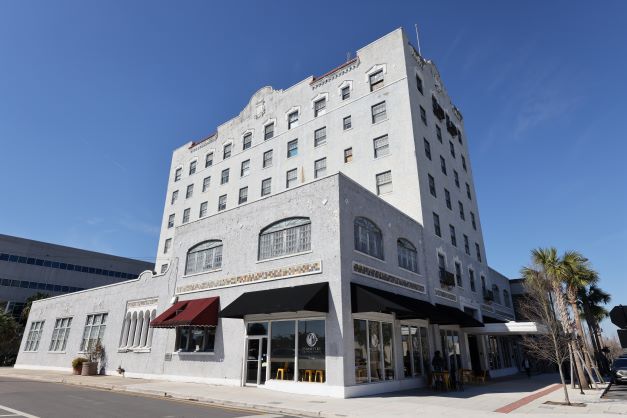 Building History According to history provided by the City of Ocala, citizens of Ocala came together to finance the construction of the Marion Hotel in 1927. The costs of the initial construction were covered by the sale of stock certificates sold by the Community Hotel Corporation, using the slogan “What Ocala Builds, Builds Ocala”, with all the capital raised in just six weeks. The seven-story Mediterranean Revival hotel was built to accommodate Ocala’s growing tourism and business travelers and remains one of Ocala’s tallest buildings. Like many historic downtown buildings, the Marion Hotel suffered in the 1970’s and 1980’s. The building was added to the US National Register of Historic Places in 1980, and in 1985, the Florida Trust for Historic Preservation granted a facade easement to protect the building and ensure it would be preserved and maintained for future generations. In the 1990s, the building was converted to office condominiums as the Ocala National Bank building and renamed the Marion Sovereign Building in 2007. Bruce Ackerman [Ocala Gazette]2022.

When local philanthropists and real estate developers David and Lisa Midgett announced their intention to restore the tallest building in downtown Ocala back into a boutique hotel called The Hotel Marion, there was one big challenge: they needed to own all of the units in the historic structure.

David Midgett told the Gazette recently that the couple has finally acquired ownership of every unit at the building, located at 108 N. Magnolia Ave. “We had multiple hurdles to overcome, including owners who didn’t want to sell as well as a few title problems and code issues,’’ he said, “but our team was able to complete the acquisition phase earlier this month.”

The Midgetts are finalizing financing with a local community bank and are building their list of partners to pull off the ambitious project.

“We have entered into a Design/Build contract with The Collage Companies out of Lake Mary, and retained local architect John Donahue,” said David Midgett.

“HDG Hotels is an outstanding full-service hospitality company that will be our operating partner for the hotel and will also help us with pre-construction technical services and brand selection,’’ said Lisa Midgett. “Vivant Capital is an international asset management firm that will assist with overall management of the project. We are also finalizing terms with a world class food and beverage partner for our restaurant and bars.”

Navroz Saju, founder and principal at HDG Hotels, and Azim Saju, president and CEO for HDG Hotels, jointly stated that “The Hotel Marion is yet another opportunity for HDG to develop a hotel in Ocala that will positively impact our home community. This historic building and block in our downtown have a great story to tell. We are excited about what the Midgetts have planned and to be a part of the building’s return to serving as a destination hotel.”

The Midgetts expect the preconstruction and design phase to take another six months, with demolition and construction to begin in March 2023, and the new hotel opening in fall of 2024. “We still have tenants in the upper floors through the end of 2022, so we can’t really start working on the building until they have found new offices,” explained David Midgett.

The Midgetts also hope to receive financial incentives from the City of Ocala similar to those granted to other downtown hotel and economic-catalytic projects. “The city has been great to work with, and they clearly believe this is one of the most important restoration projects in Ocala right now,” said David Midgett.

Incentives for downtown development and redevelopment have previously been funded by the city’s downtown Community Redevelopment Agency. CRAs are the publicly financed rebuilding of an older urban area distressed by social, physical, environmental or economic conditions that discourage private investment. The goal is to transform underutilized properties into productive assets to improve the community.

Tye Chighizola, director of Growth Management for the City of Ocala, explained to the Gazette how a TIF works.

“All that money from that $1 million can go anywhere in the city or county, but that[tax revenue on the]  $9 million, that growth, that stays in the CRA,” he added. “So, the county doesn’t get that portion of it. And the city can’t use it for anywhere else other than that CRA.”

The Ocala City Council members serve as the CRA Board; but legally, it is a separate entity than the council itself. The CRA Board meets prior to city council meetings, as needed, on the first and third Tuesday of the month at 4 p.m. at City Hall.

Chighizola confirmed to the Gazette that the Downtown Ocala CRA would likely be explored be as source of funding to support the project and that city staff looks forward to hearing more details about the project. 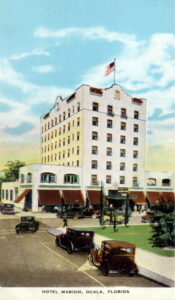 Chighizola indicated that typically funds paid from the CRA trust fund are reimbursements after the developer has executed the project and spread out over a few years so that they can be budgeted. In addition to CRA funds, the city is also a valuable partner in figuring out how to increase parking to support all the projects anticipated within the northern side of the downtown CRA.

The Midgetts plan one last big party before starting construction.

“We are planning an invite-only New Year’s Eve black-tie event,’’ said Lisa Midgett. “We want Ocala to have one last chance to say goodbye to the ballroom before it is renovated as a fine dining restaurant, and of course we plan on raising money for our favorite local charities as well.’’