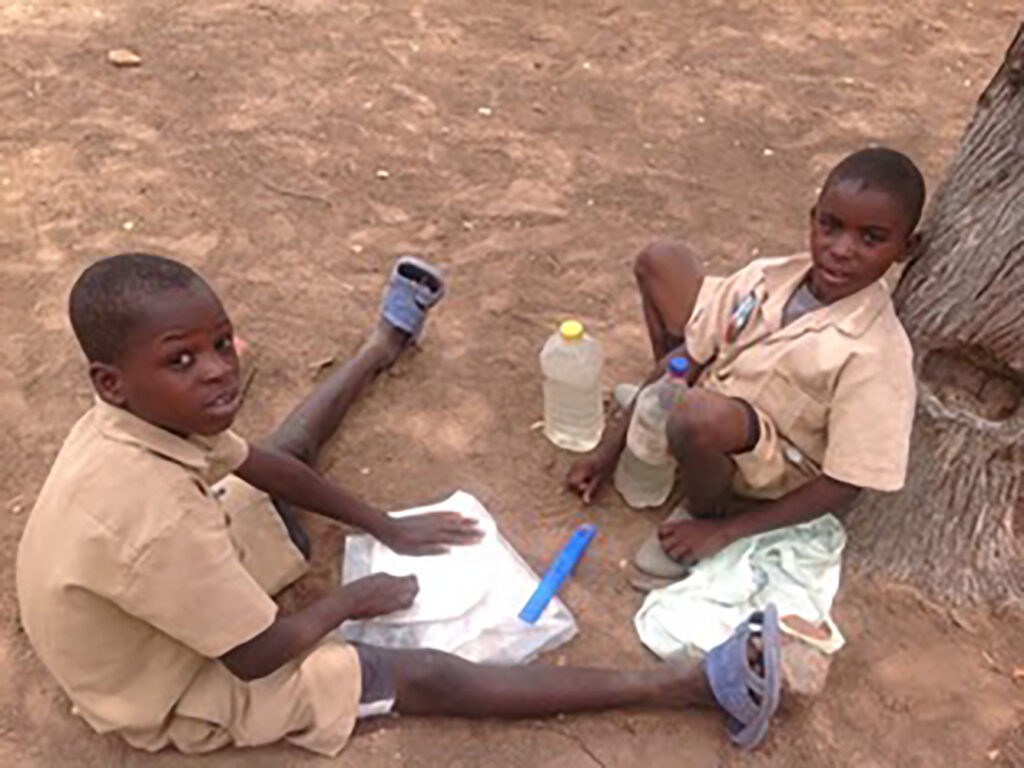 Two boys sit with their water bottles. The area’s water quality is not consistent, and water borne diseases are a major concern. [submitted]

Amidst the excitement of the six Rotary Clubs in Marion County gearing up for their second annual Duck Derby on Lake Tuscawilla in Midtown Ocala to be held in conjunction with the Ocala Cattle Drive & Cowboy Round-Up on Feb. 13, members of the Ocala Rotary Club have another reason to celebrate.

They recently received news from Rotary International that their grant application for $120,250 for a project titled The Musingwa Simple School Project (Zimbabwe) was approved. The funds will be used to improve conditions at The Musingwa Primary School located in a very remote area of Zimbabwe in Africa, a project for which they are partnering with a Rotary Club in the capitol of Zimbabwe called Harare Highlands Rotary.

According to Ocala Rotary Club member Tom Coene, the school, which serves nearly 400 students up to grade level 7 with just 10 teachers in an area prone to flooding and drought, lacks a good water supply, electricity, sufficient classrooms and sufficient teacher housing. It also has an outside kitchen, which needs improvement, no health clinic or treatment center, an unsafe playground made of tree branches, poor school supplies and no library at all.

“The grant will provide two buildings each with two classrooms, electrification, teacher and other training, a wash station and sanitation, and at last, water,” he said, noting that a district grant for $15,000 in 2016 provided funding to drill a productive borehole to suit the school, but the grant failed.

“Four boreholes were drilled and the one that had a small amount of water collapsed,” he said. “So, no water.”

Together with his wife, Mary Lou, and some others, Coene visited the school in the summer of 2017 to find out why the effort failed and to attempt to get some ideas about a path forward. He said the trip was “enlightening.”

“First,” he said, “it is almost impossibly remote – not in distance but in terrain and weather. It is only accessible for seven to eight months of the year and then over extremely rough and rugged roads in the basin of the Zambezi River,” he said.

Students must walk about 18 miles to take their 7th year exams.

“This is an overnight trip, and there has been abuse and pregnancies due to this journey. As a result, students are fearful and too often stop their education,” he said. “And that’s not mentioning the almost limitless needs at the school.”

There are just four to five classrooms for 400 students, outhouse sanitation in need of improvement, no hand-washing facility, and students bringing or getting their water from a variety of sources with questionable quality. Despite it all, he noticed that the children were all delightful, engaging and very well-mannered, he said.

After the trip, Coene said he felt challenged to address the many needs of the school. Through a series of calls, he was directed to the Rotary Foundation’s Simple Schools grant initiative and has been working on all the logistics of the application for two years. “The amount of work and communication required was amazing,” he said, noting that it involved effort and coordination between the Ocala Rotary, the Rotary Club of Harare Highlands in Zimbabwe, The Rotary Foundation, the relevant Rotary Districts, the school, the ministry of Education in Zimbabwe, World Vision Zimbabwe, the water and power agencies in Zimbabwe, various contractors and the area’s government, “but we got there.”

In 2015, said Coene, the percentage of students from the school passing the 7th grade standard testing was just 2%. However, it improved to 42% in 2017 and dipped back down to 38% in 2018. These improvements were attributed to the Harare Highlands Rotary Club in conjunction with World Vision Zimbabwe building two block and mortar classroom buildings, replacing pole and thatched buildings, and the Denver Mile High Rotary Club sponsoring a building to house teachers, although it only covers about 50% of the housing needed.

In addition to the attempt at drilling for water in 2016, the Ocala Rotary Club also donated a small amount of much-needed school, dental and sanitation supplies.

“Small investments in this school have paid dividends,” said Coene. “But there is still a long way to go to improve attendance, teacher conditions, student well-being and student performance. This grant is intended to address these concerns.” He added: “The Minister of Education for the Muzaranbani District called this school ‘the forgotten school’ and we want to change that.”

Coene said that since the grant was approved in early December, progress can begin soon, and the project is expected to be completed by the next rainy season affecting the school which will occur in November 2021. Due to the school being in an area “infinitely more impoverished” than most Americans can imagine, Coene said it is hard to express what it means him and the Ocala Rotary Club to be awarded the grant. Simply put, he said, “I can sleep at night now.”