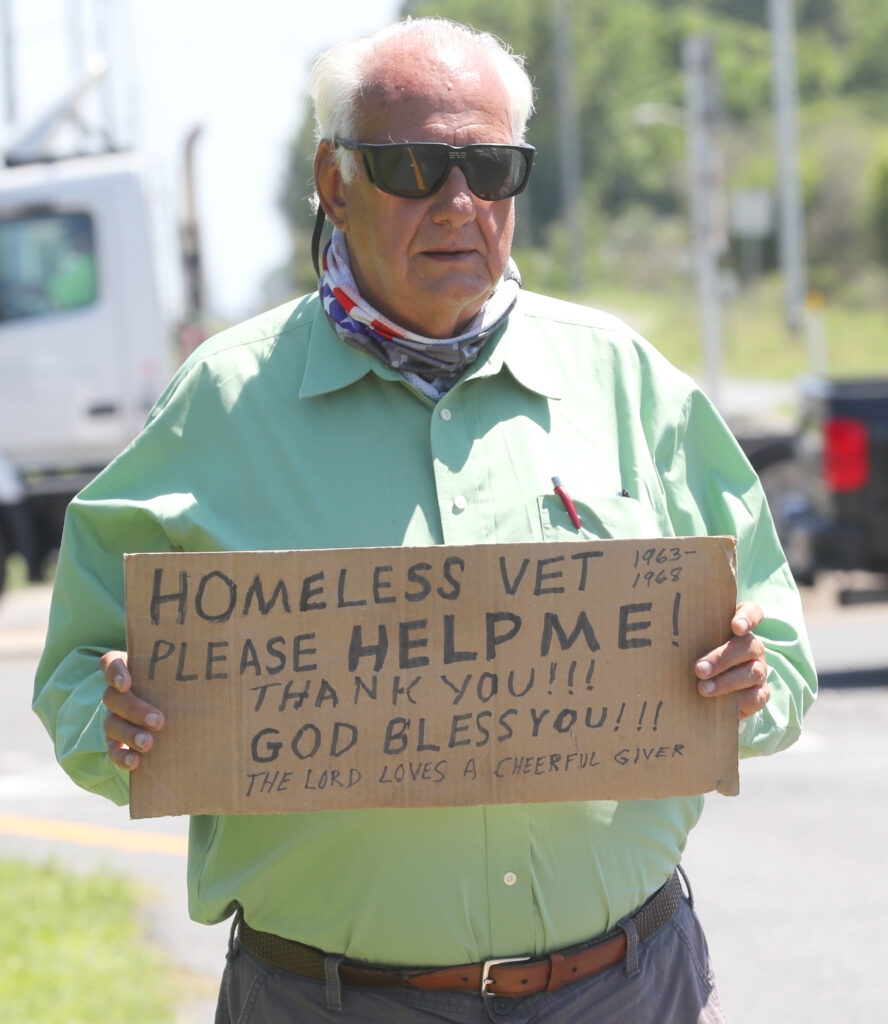 Larry Idener, a homeless U.S. Navy veteran who served from 1963 to 1968, holds a sign as he asks motorists for a monetary donation while he stands on the I-75 southbound off-ramp on West Silver Springs Boulevard in Ocala, Fla. on Wednesday, April 21, 221. Idener said that he is originally from Ohio and was trying to make his way to Sarasota. [Bruce Ackerman/Ocala Gazette] 2021.

Larry Idener holds a sign as he asks motorists for a monetary donation while he stands on the Interstate-75 southbound off-ramp on West Silver Springs Boulevard in April. [Bruce Ackerman/Ocala Gazette]

On Tuesday, the Ocala City Council repealed parts of its panhandling ordinance in the face of a recent legal challenge and a spate of separate court rulings striking down similar measures across the country.

The council voted unanimously to repeal the provisions.

Several courts have ruled similar ordinances across the country unconstitutional, according to Patrick Gilligan, the city attorney.

“The unanimous and overwhelming case law is clearly against the city, including a recent federal decision interpreting their ordinances in Fort Lauderdale. (Those ordinances) are almost identical to ours,” Gilligan said.

The city first adopted its Roadway Solicitation ordinance on Feb. 5, 2008, making it unlawful for any person to stand in the street, highway, median or bicycle path and solicit or attempt to solicit from those in vehicles.

The city revised the ordinance in 2018 making it unlawful to panhandle within 20 feet of business entrances and exits; bus stops and other public transportation facilities; ATMs and similar machines; any parking lot, parking garage parking meter or parking pay station operated by the city; public restrooms and gas pumps.

It also prohibited panhandling after dark and expands the definition of “aggressive panhandling,” which includes obstructing, blocking or impeding an individual or group of people from passing by a panhandler.

With the moves on Tuesday, those provisions are now largely repealed.

The groups argued the panhandling ordinances infringed on people’s First and Fourteenth Amendment rights and criminalized people asking for help.

While the repeal of the ordinances effectively ends the argument detailed in the lawsuit, there was still damages and attorney’s fees left to sort out.

“I wouldn’t pay them a dime, but that’s council’s decision,” said Mayor Kent Guinn of the plaintiff’s damages.

Council President Justin Grabelle asked if they could refuse to pay damages.

“Yeah, and if they go to trial, attorney’s fees would go up and you’ll pay more than that. I understand your frustration, mayor, and I share it,” Gilligan said, adding he finds it troubling giving money to those that will likely misuse it.

Councilmember Jay Musleh wasn’t happy about paying the damages but felt it was something they had to do.

“$2,500 is more than they deserve. Most of them are common criminals. This is a nuisance lawsuit were trying to get it settled so we can move on. If we go to trial, we’re likely going to lose and then having to wind up having to pay a lot more money,” he said.

After discussion, the council came to a consensus to offer $2,500 to each plaintiff and $20,000 for attorney’s fees. The offer will go to the plaintiff’s attorney for consideration. If accepted, the council will vote to approve the payment.