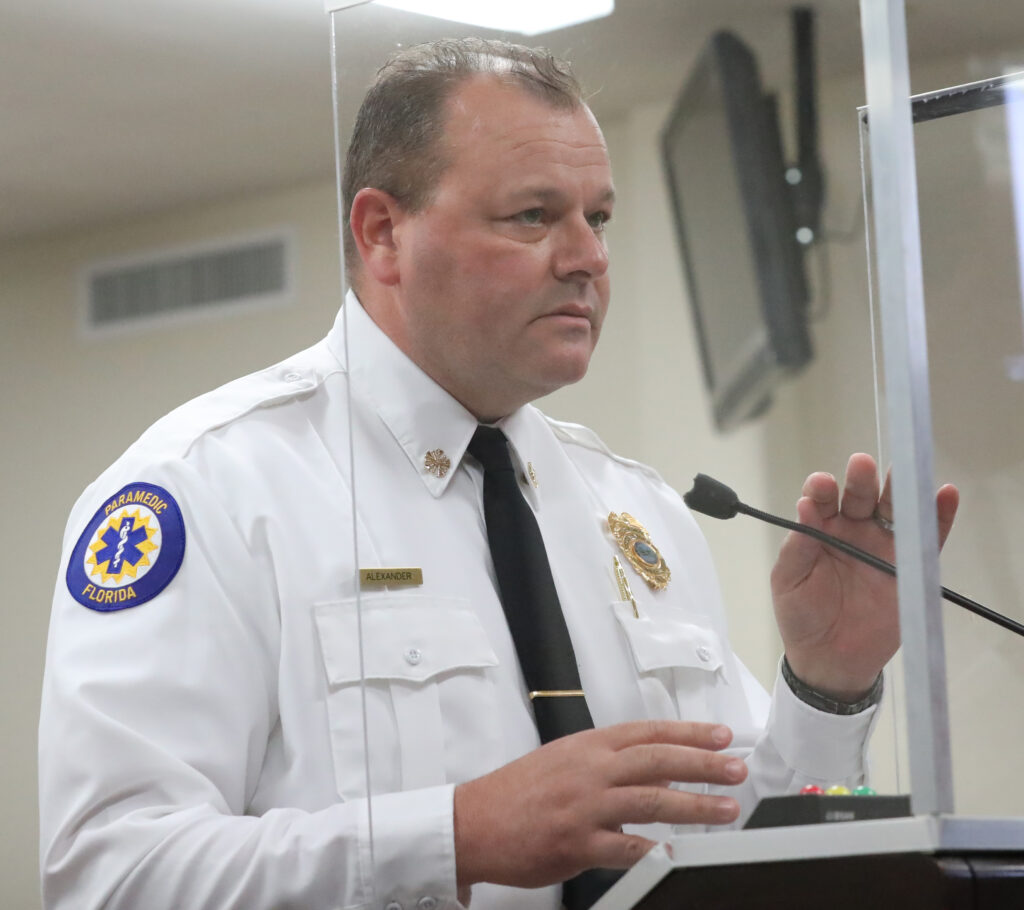 Ocala Fire Rescue Chief Shane Alexander talks to Ocala City Council about the Ocala Recovery Project on Dec. 15. Alexander is pushing for wider use of the Marchman Act to help those struggling with addiction issues. [Bruce Ackerman/Ocala Gazette]

Ocala Fire Rescue Chief Shane Alexander talks to Ocala City Council about the Ocala Recovery Project on Dec. 15. Alexander is pushing for wider use of the Marchman Act to help those struggling with addiction issues. [Bruce Ackerman/Ocala Gazette]

Ocala Fire Chief Shane Alexander will tell you there’s a saying in drug treatment circles: “If you don’t know who the addict in your family is, it’s probably you.”

Alexander stresses the adage isn’t meant as an attack but rather a reminder that drug abuse touches almost everyone.

The COVID-19 pandemic also brought a spike in drug overdose death in the county. Between March and June, 64 people died of overdoses, an increase of more than 100% over 2019, when 31 people died, according to a recent study by the Orlando-based Project Opioid.

With so many struggling with substance abuse, most people have an addict in their circle, Alexander said.

But most people don’t know family and friends have a legal option to help their loved ones get treatment, he said.

The Marchman Act is a Florida law allowing family and friends to petition the court for mandatory treatment for someone abusing drugs or alcohol and endangering themselves or others.

Physicians and law enforcement have the power to hold someone in protective custody for short term care. But the act also gives spouses, relatives, guardians or three non-relative adults with “firsthand knowledge of the person’s impairment” the power to do the same, according to the Marchman Act Florida website.

“Since August, we have Capt. (Jesse) Blaire on 24/7 for someone who is in crisis in an overdose,” Alexander said during a presentation before the Ocala City Council recently.

The project operates through a federal grant and is a collaborative effort between first responders, judicial, medical and mental health representatives to help improve services.

“(Blaire) is at the hospital with the patients any time of the day, including nights and weekends. Since August, all of our Marchman Acts have received treatment … mostly medication-assisted treatment, which is known to be incredibly successful.”

According to Alexander, of the 200 patients OFR has aided with Marchman Acts, only seven have been repeat patients.

Alexander said the Marchman Act was underutilized in the Ocala area. Few knew about it, and others weren’t sure how to apply it effectively.

In Marion County, those seeking to use the Marchman Act must swear an affidavit that they are being truthful, according to the Marion County Clerk of Court’s website.

The county also requires that a counselor at a treatment facility verify there is a danger of harm.

The requirements are there to try to prevent people from using the act maliciously.

If a judge agrees, the Marion County Sheriff’s Office takes the person to a treatment facility.

“It has not, historically, been nearly as understood as the Baker Act,” Landt said. “Everybody knows that if my relative, my family member, my friend, a guy on the street, is really struggling or talking about suicide or they’re talking about hurting themselves or hurting someone else, you can call and get this person Baker Acted. People may not know what it means, but they know it’s there,” he said.

But he said the Marchman Act could also suffer from the stigma associated with drug abuse.

“That’s a very difficult thing to do,” Landt says. “That aspect of it has been better than I think it ever has been. Unfortunately, that’s a result of the opioid crisis because everybody knows somebody who has either died or whose family member has died of overdose.

“I mean, it’s almost impossible not to.”

The Ocala Fire Rescue is committed to helping alleviate the opioid crisis in Ocala. Alexander attests that the Marchman Act is one way of doing that. To learn more about OFR’s efforts and speak to someone about receiving help for yourself or a loved one, please call 352-266-4769.