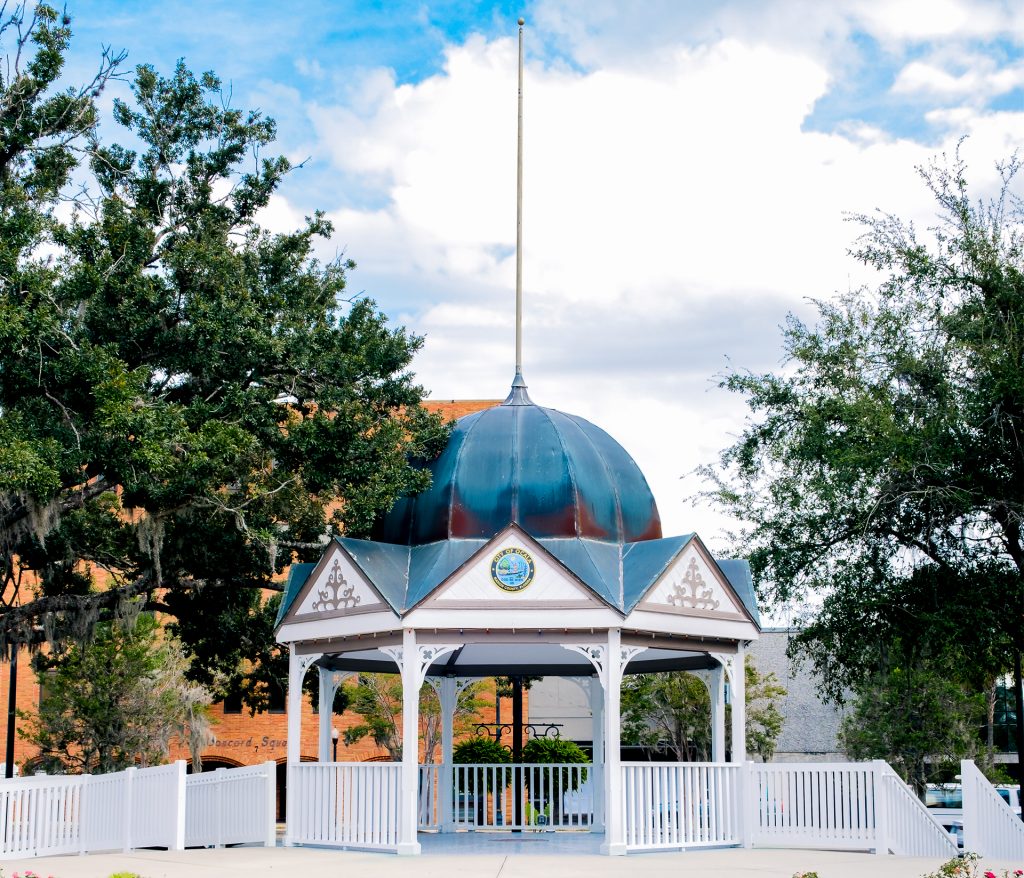 In 2020, there were enough short straws to go around. But perhaps none drew shorter straws than small businesses during the coronavirus pandemic. With constantly wavering safety protocols and more people hunkering down in the safety of their homes, small businesses were on the receiving end of haymakers all year long.

However, Ocala’s small businesses were able to crutch onto Ocala Main Street, a non-profit organization which strives to build the strength and vibrancy of downtown Ocala. But even simpler than that, Main Street’s executive director, Leighton Okus, will tell you that its mission is to bring people downtown.

“I mean there’s a broader, more specific mission statement, but our overall goal is to bring people downtown,” Okus explains. “We are always looking for ways to support the business and our community. And make our downtown as much as a vibrant, thriving, heart of our city. So doing that through COVID-19 was super tough.

“But really kind of beautiful in the way that we all learned from each other and connected through survival mode.”

There’s no chapter in the small business handbook that tells a business owner how to navigate a global pandemic. Though that chapter might exist in future literature, in 2020 “survival mode” was the only resource Main Street and Ocala’s downtown businesses had at their disposal.

“It was so fun for the artists, it was so fun for the restaurants… We had a huge response from the community and business owners that it was such a positive thing,” Okus said. “It was really cool to make a big splash while kinda redefining Ocala Main Street for our community.”

Ocala Main Street also held a Downtown Burger Tour, which Okus calls the highlight of her 2020.

For 13 weeks, members of Ocala Main Street’s board of directors spent every Friday trying the burgers of downtown eateries and providing reviews on the burger and the overall experience at the restaurant.

And while earning national recognition for its efforts was rewarding, the moral victory merely compared in the grand scheme of things.

According to Okus, Ocala’s downtown area thrived during a time when so many others were crippling.

“When I do monthly phone calls with the other Main Street districts, Ocala has really stood out among those districts,” Okus said. “Businesses are opening instead of closing. And that’s very rare in our current economic state.”

And while Ocala did see a number of new establishments pop up downtown, there were also a few closings.

The most memorable loss for Okus was Feta Mediterranean Cuisine going under. A staple for Okus and a landmark for many others, Feta permanently closed its doors on July 3, after eight years of serving Ocala.

“When Feta closed and when we lost some of our local businesses, that was hard,” Okus said. “Knowing it was out of all of our control.”

However, despite the losses, Okus, Ocala Main Street and business owners were encouraged by the support of a “unique” Ocala community.

Continuing to thrive is a major component to Main Street’s mission statement. And in 2021, the path is looking a little different than the past.

“I think what we are going to be aiming for in 2021 is a safer, smaller, more consistent downtown event presence,” Okus said.

Much of Main Street’s focus heading into the new year is being sure to communicate well to the community to ensure the safety of patrons through the everchanging protocols and regulations. Main Street hopes to make coming to downtown Ocala as comfortable as possible for those still wary about the pandemic.

Main Street’s first event of 2021 is coming on March 27 when the inaugural Guns and Hoses, an all-day family event benefiting Marion County and Ocala’s first responders, as well as a fundraiser for Main Street comes to downtown Ocala.

Fundraising from such events like Guns and Hoses is just one way Main Street funds itself. Though the non-profit organization was previously partnered with the Ocala Chamber and Economic Partnership, the CEP’s funding of Main Street has since stopped.

While the CEP supports the mission of Main Street and believes and works towards the development of a vibrant downtown as key to community growth, the CEP ceased funding the organization a couple of years ago,” Olana McDonald, director of communications with the CEP said. “We continue to be supportive of their efforts.”

According to Okus, Main Street introduced membership fees in 2020 to help its funding efforts. However, with a faltering economy, obtaining memberships was easier said than done last year. Okus hopes to see more businesses join the organization in 2021.