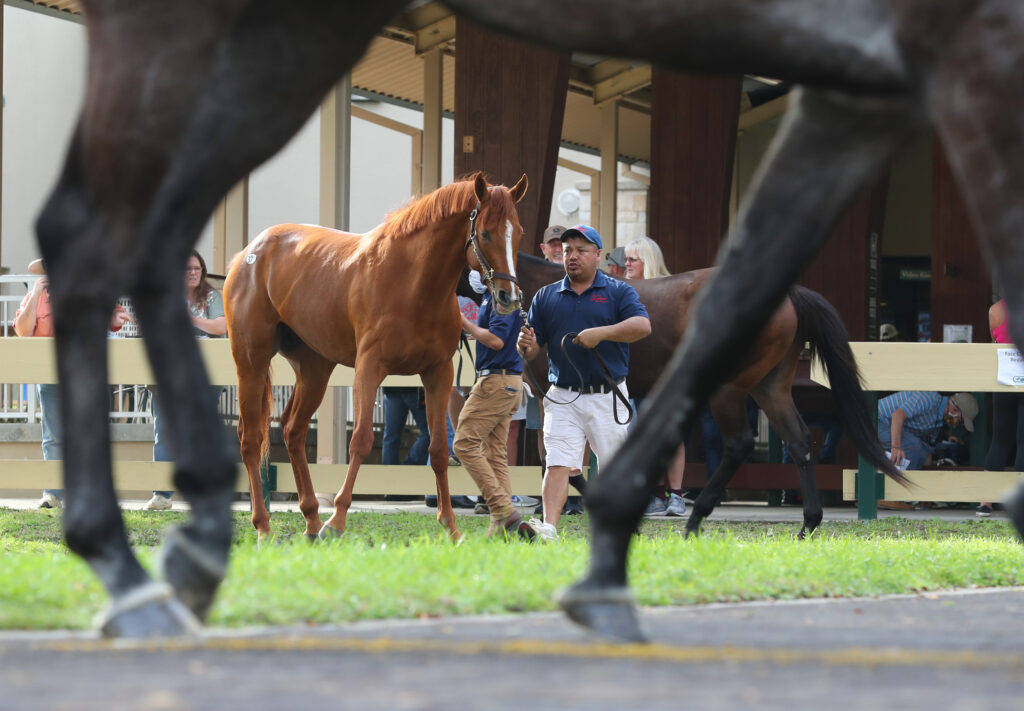 It was worth the wait.

The highest-priced horse at the Ocala Breeders’ Sales Company winter sale was the last one through the ring.

The yearling filly by Laoban sold for $175,000 to end an encouraging first sale of the year for the Ocala-based thoroughbred auction company.

“It was a strong showing and a great way to start the year,” said Todd Wojciechowski, OBS director of sales. “It was a steady market for us. We sold a few more horses this year than we did last year, which was always good.”

But for those connected with the sales topper, there also was a touch of sadness.

The filly was part of the estate of Kenny LeJeune, who died in December.

LeJune used to gallop and breeze for Ocala-based Nick de Meric, who bought the filly.

“He was a good personal friend and a great ambassador for the sport,” said de Meric. “He was a tragic loss, and when I signed the ticket, I said, ‘that’s one for Kenny.’”

But aside from sentimental connection, de Meric said the filly shows class.

“She was a filly that seemed to get better by the day,” he said. “Initially, when I first saw her, right at the end of the sale and in the yellow section of the addendum, I was thinking ‘gosh, I might be able to steal her.’ There were a lot of people landing on her, and meanwhile, each time you looked at her, she seemed to be better than the time before… We’re very happy to have her. She looks like the goods to me.”

The sale’s strength gave some hope that 2020’s doldrums are over. The thoroughbred sales industry dropped steeply after the COVID-19 pandemic took hold. OBS and other sales companies rescheduled and even canceled sales after March. Prices fell after racetrack across the country shut down amid the pandemic. Tracks resumed racing later in 2020, but sales continued to suffer.

“The numbers were very comparable to last (January),” said Wojciehowski. “The average was up slightly, and we sold a few more horses… The gross was up as a result of the function of selling more horses. It was a pretty steady market.”

Raven bought Bear Brian, a 3-year-old colt, for $150,000 on Tuesday. The lightly raced 3-year-old son of Tiznow was the second most expensive horse sold during the sale. He was consigned by Summerfield, as agent, for Stonestreet Stable.

The highest-priced yearling colt also sold on Tuesday during the sale’s preferred session.

A colt by the stallion Practical Joke sold for $130,000 to Ronald Clark Shepherd. Summerfield also consigned that colt.

“He’s a really nice colt conformationally, and being out of an Uncle Mo mare, he has a little Uncle Mo look to him, some stretch and whatnot,” said Summerfield’s Francis Vanlangendonck. “It attracted people with the right eye and the right amount of money. There was a reasonable reserve on him. The owner sold him to raise cash to pay stud fees. They’re thrilled.”

“I have a small group of mares that I have foals out of every year,” said Bayer. “I just don’t have that many foals. He’s one of four. We take care of them. We’re hands-on personally.”

The colt possessed the perfect little frame, said Bayer. The Ocala-based consignor was pleasantly surprised with the price the colt brought.

“He’s always been mature, developed, good boned and good-minded, one that never had a bad day,” said Bayer. “He made it easy for me.”

The colt reminded Lanni a lot of Mor Spirit, and he appears to possess many of those same attributes of his sire.

“He’s very fast sound looking animal,” said Lanni. “Mor Spirit was a very fast horse. He’s a standout. He kind of separated himself. Everybody liked him. I’m lucky that I got him.”

The next OBS sale is set for March 16 -17 and will feature 2-year-old thoroughbreds.