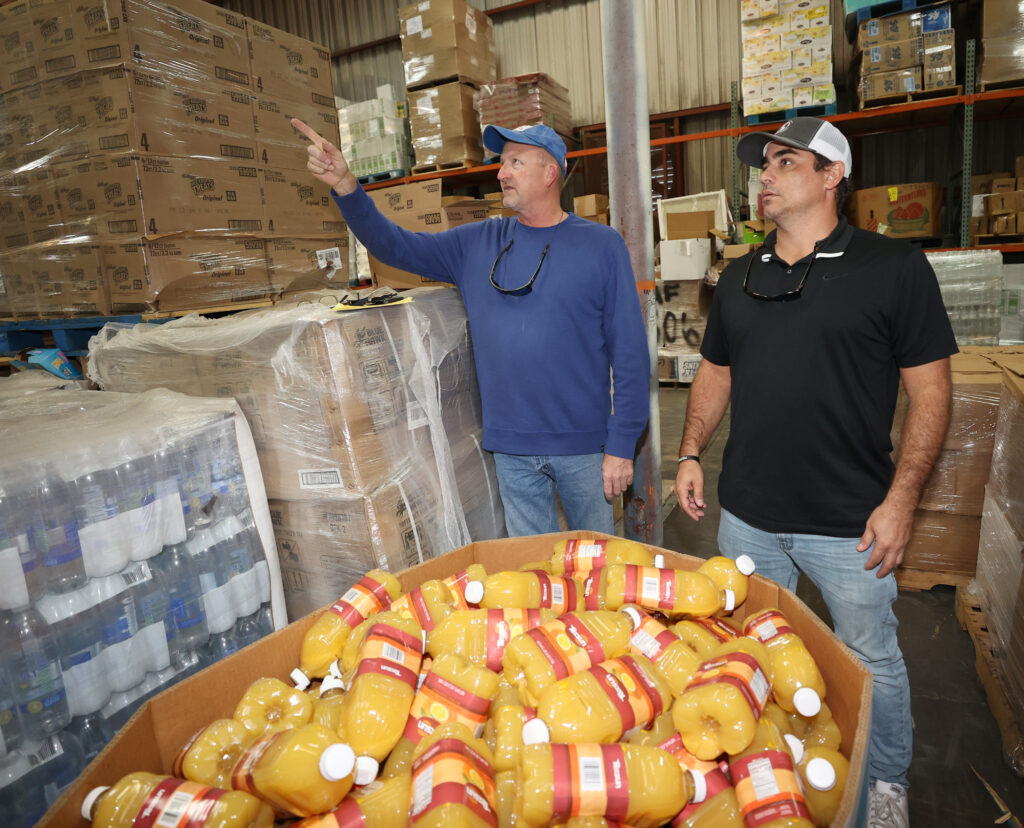 Steve Ewing, the founder and president of Crossroads Alliance and Ministries, left, and Donald Husted, the vice president of development, take inventory of some of the thousands of supplies they are getting ready to ship to Honduras at the Crossroads Alliance and Ministries warehouse on Southwest 33rd Avenue in Ocala, Fla. on Wednesday, Nov. 18, 2020. The group is sending non-perishable food, drinks, medical supplies, diapers, generators, compressors and even a golf cart, to name a few, to the areas of Honduras that were recently devastated by both Hurricane Eta and Hurricane Iota to help the people who lost everything. [Bruce Ackerman/Ocala Gazette] 2020.

Crossroads Alliance and Ministries in Ocala has been steaming to the rescue of Third World villages ravaged by natural disasters for years, ferrying life-saving food, shelter and supplies to regions decimated by hurricanes, floods and other catastrophes.

In 2019, the organization organized an airlift of tons of aid to the storm-battered Bahamas, for instance.

But what happens when the rescuers need rescuing?

A mission established by Crossroads Alliance in Honduras was battered by back-to-back Category 4 hurricanes in recent weeks, and now the Alliance Leadership is faced with the monumental task of rushing tons of supplies to the Central American nation to prop up tens of thousands of people who lost virtually everything.

“The people there had little to begin with,” said Steve Ewing of Crossroads Alliance in Ocala. “Most of their homes are little 10-by-15 structures, and they don’t even have those any more. They lost everything.”

The International Red Cross estimates that about 4.2 million people were affected by Hurricanes Iota and Eta in Honduras, Nicaragua and Guatemala. Several hundred thousand are in shelters or makeshift camps across the region.

In southern Honduras, on the border with Nicaragua, Crossroads has a 75-acre mission that features a school for 550 children, a clinic, a farm and a café. Ewing said the mission’s buildings are intact, but the surrounding villages were annihilated.

To Ewing’s great frustration, the tragedy has gotten little media attention here in the United States, where COVID-19 and the presidential election dominate the 24-hour news cycle. 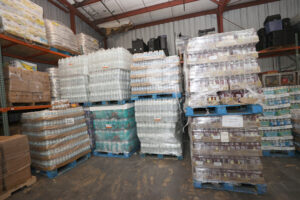 Some of the thousands of supplies that are being shipped to Honduras are shown at the Crossroads Alliance and Ministries warehouse on Southwest 33rd Avenue in Ocala on Wednesday, Nov. 18.  [Bruce Ackerman/Ocala Gazette] 2020.

Still, Crossroads has managed to collect hundreds of pallets of food and supplies for the victims but needs much more and faces a shortage of funding to ship the cargo containers.

“It costs $6,500 to ship a half million dollars worth of supplies,” Ewing said. “That’s a pretty good deal, but we need the money to do it.”

Donations can be dropped off at the same location or can be made on the agency’s website, www.crossroadsam.org