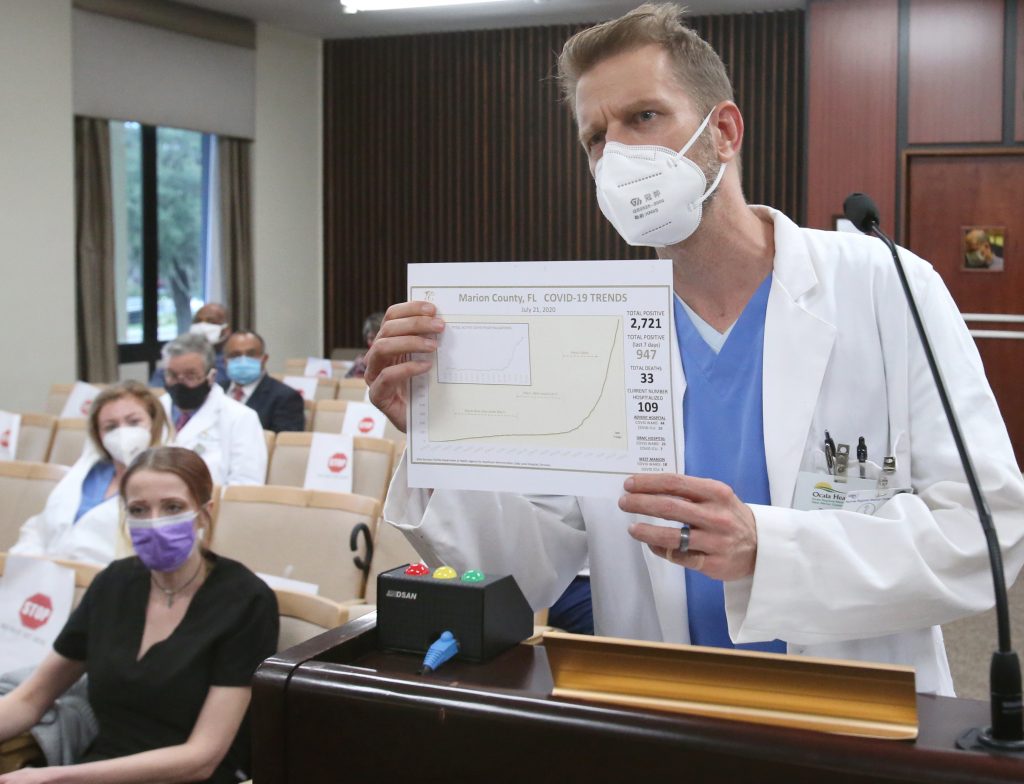 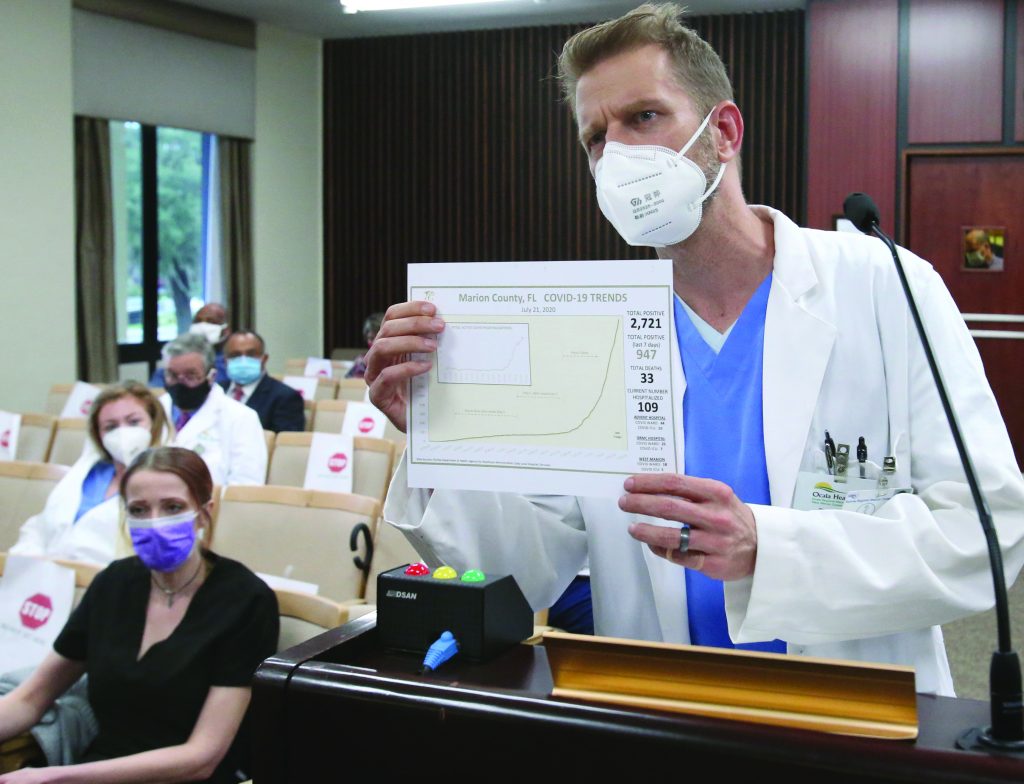 Dr. David Kuhn of Ocala Health holds up a chart showing the increase in COVID-19 positive cases and deaths in Marion County as he speaks in favor of an emergency ordinance to require face coverings during the Ocala City Council meeting at Ocala City Hall in Ocala.

Nearly three hours of public testimony and debate on Tuesday night ended with the Ocala City Council narrowly rejecting a proposed mandate requiring that masks be worn in all indoor settings and outdoors when social distancing is not possible.

The council voted 3-2 for the mandate, but because the proposal – requested by some 700 Ocala doctors, nurses and other health care professionals – was brought before the council as an “emergency” ordinance by Council Matt Wardell, the city charter requires 4 of 5 council votes to be enacted.

Councilman Brent Malever ended up being the swing vote. He said he favored a mask ordinance but did not like the enforcement portion of the measure, which called for police to issue fines. He ultimately voted against the ordinance, along with Council President Jay Musleh. Councilmen Ire Bethea, Justine Grabelle and Wardell voted for the ordinance.

Wardell was spurred to act after receiving a letter from hundreds of local doctors and other health care professionals to the City Council as well as the Marion County Commission and the Belleview City Commission.

The typed letter – including 13 pages of signatories – called for the following: 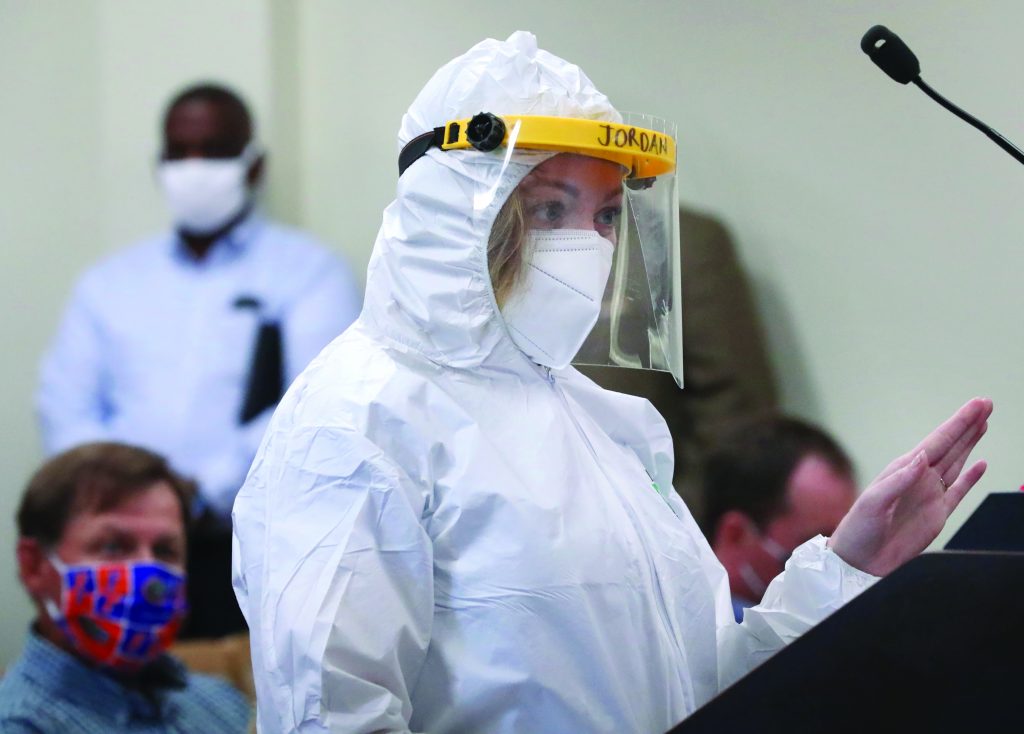 Jordan Preston, a health care professional, wears a face shield, mask and a medical protective suit as she speaks in favor of an emergency ordinance to require face coverings during the Ocala City Council meeting.

“The members of this group respectfully request that our County and City Officials pass an ordinance requiring the use of face masks or face shields by the public in all indoor settings, and all outdoor settings when social distancing (six feet or more), cannot be achieved and maintained. We believe that any violation of this ordinance should be limited to a civil infraction only, not criminally punishable.”

There were a number of mandate opponents who spoke to the council. Rock Gibboney, who also spoke earlier in the day at the Marion County Commission meeting, was adamant any mask mandate was a violation of his rights.

“It’s against your constitutional rights,” Gibboney told the council, adding that he is unconvinced there is any real health benefit to wearing a mask. “If somebody wants to wear one, fine. But don’t force me to wear one.”

But it was the doctors who spoke most passionately to the council – all in favor of a mandate. 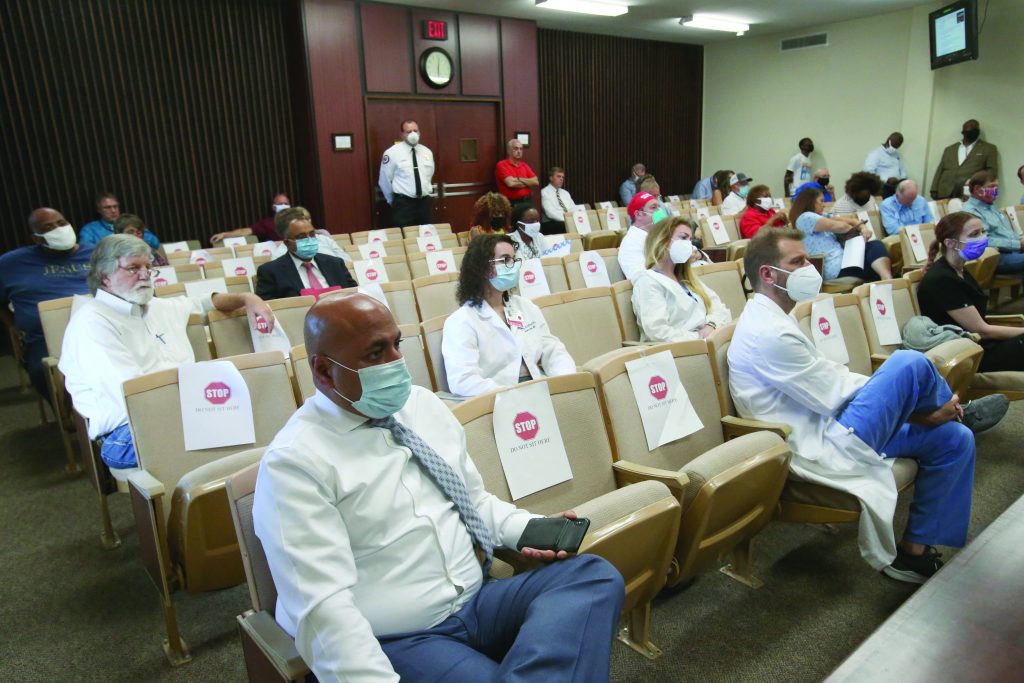 Dr. Anish Khanna, the medical director for Team Health at Ocala Health, center, listens with other health professionals as they practice social distancing while the City Council discusses an emergency ordinance to require face coverings during the Ocala City Council meeting.

Dr. David Kuhn, a local internist who helped organize the letter, showed the council a chart illustrating the sharp increase in cases over the past month in Marion County. He said it is not only the increase in the number of cases that is worrisome but the increase in hospitalizations as well.

“The burden on our hospitals is going to be a problem for our patients,” Kuhn said. “If we don’t do anything, if we just keep allowing the spread, there’s nothing to stop the trend from continuing like it is.”

Dr. Anish Khanna, who oversees intake at Ocala Regional Medical Center, said there is no question wearing a mask is beneficial to slowing the spread of COVID-19 and sees the results of too many people not wearing masks in the emergency room every day.

Dr. John Heinbockel, chief of anesthesiology for Ocala Health, said the medical professionals were acting out of “reluctant desperation.”

“I would have never imagined the coronavirus would have had such an impact on our community,” Heinbockel said. “We expect a continued increase in reported cases and hospitalizations.” 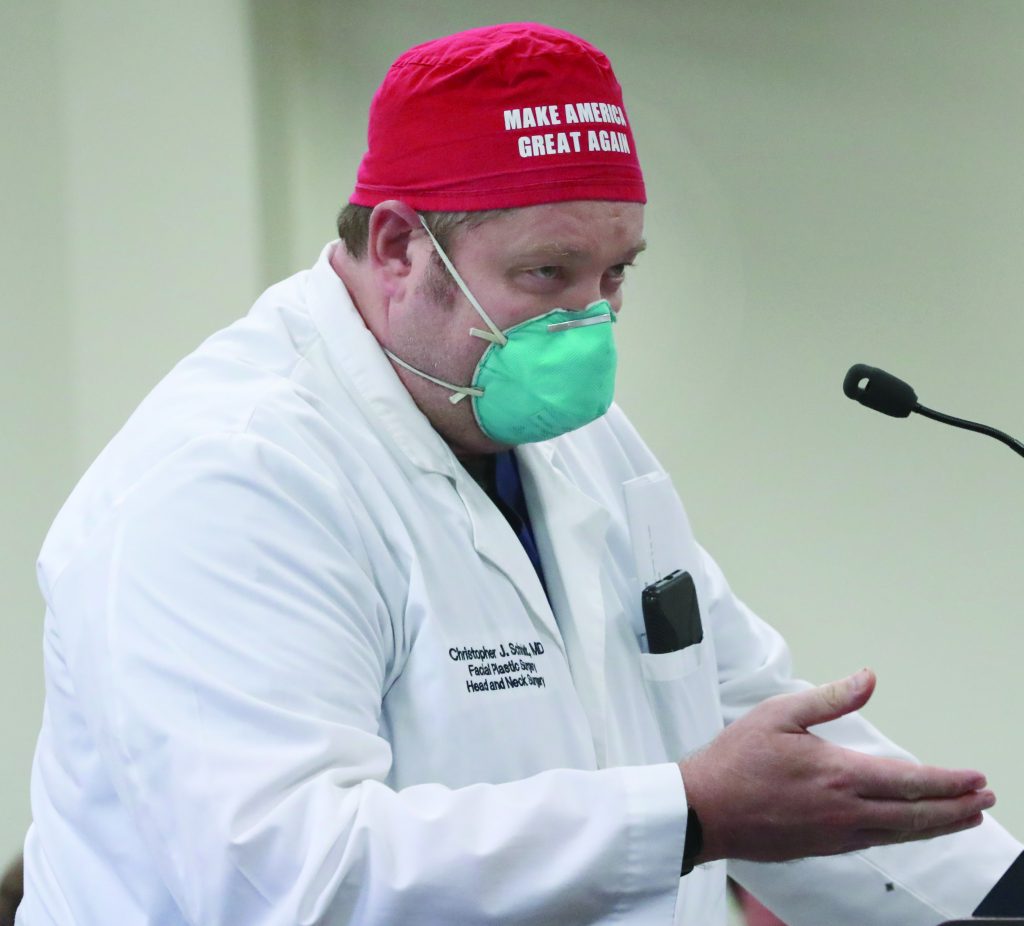 Dr. Christopher Schmidt speaks in favor of an emergency ordinance to require face coverings during the Ocala City Council meeting.

Radiation oncologist Dr. Luis Carrascosa was astounded at the resistance to the doctors’ plea.

“When was the last time any of you saw over 200 physicians write a letter and ask the City of Ocala to act on behalf of the public health,” he asked. “When?”

“This is not self-serving,” he added. “We strongly feel this is the right thing to do. And we invite you to be on the right side of history with us.”

Wardell conceded a mandate was “a serious thing to do.” But given the number of medical professionals supporting the idea, he felt compelled to act.

Grabelle, who often aligns with Wardell on issues, was supportive of the mandate.

“While masks are not perfect, they are good and will prevent the spread of disease,” he said. “I hear a lot of people say, ‘I want to get back to normal.’ Well, this is a way to do that.” 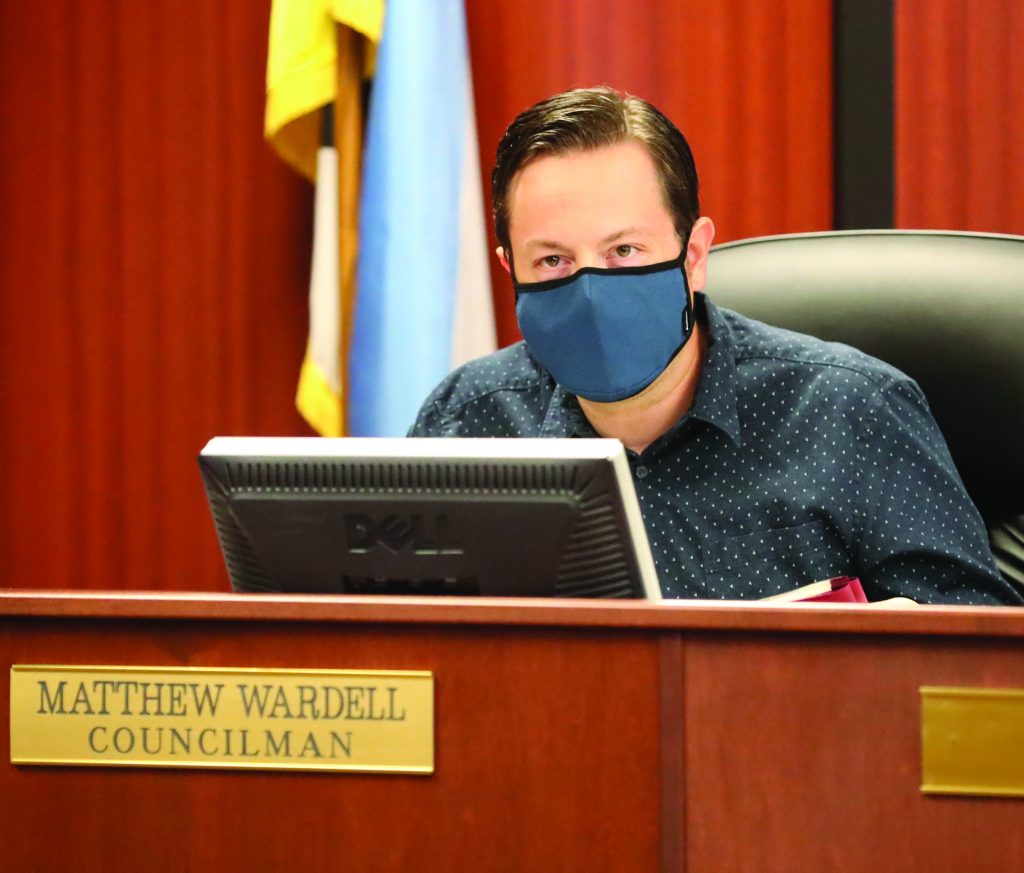 Musleh said at the outset of the council discussion that he was opposed to any mandate, saying he believed the best approach was for individual businesses to mandate masks for their customers.

His position drew a rebuke from Dr. Christopher Schmidt, a reconstructive and plastic surgeon who was wearing a red “Make America Great Again” surgical cap. Schmidt told Musleh that without the ordinance “we’re proceeding toward another lockdown.”

Both Ocala Police Chief Greg Graham and Marion County Sheriff Billy Woods opposed the ordinance because, they said, enacting an ordinance requiring police to issue tickets would increase the number of calls for police. Graham called it “an overburden for us to enforce.” 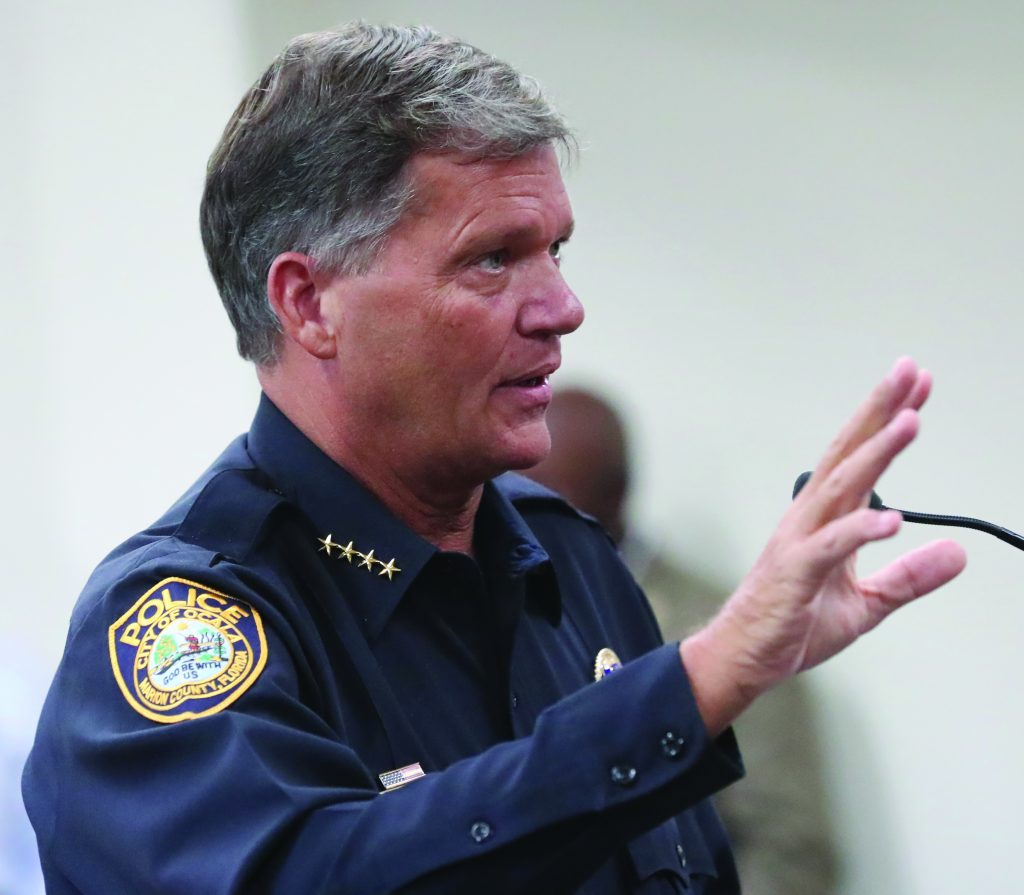 Woods said he did not believe there is any evidence that masks help reduce the spread.

Mayor Kent Guinn, who was out of town and listened in on the discussion by phone, said he remained opposed to a mandate, although he supports masks as a deterrent to the spread of the virus. “How are you going to enforce this?” he asked.

After nearly three hours of public testimony and council discussion, the vote was taken, falling short of the four votes needed for passage of an emergency ordinance. Musleh said the council will continue to support wearing masks as recommended by the Centers for Disease Control.

Wardell said Wednesday he is considering bringing back a revised version of the ordinance, one that would put the onus on businesses to mandate masks. He said he will research how such ordinances have worked in other communities first.