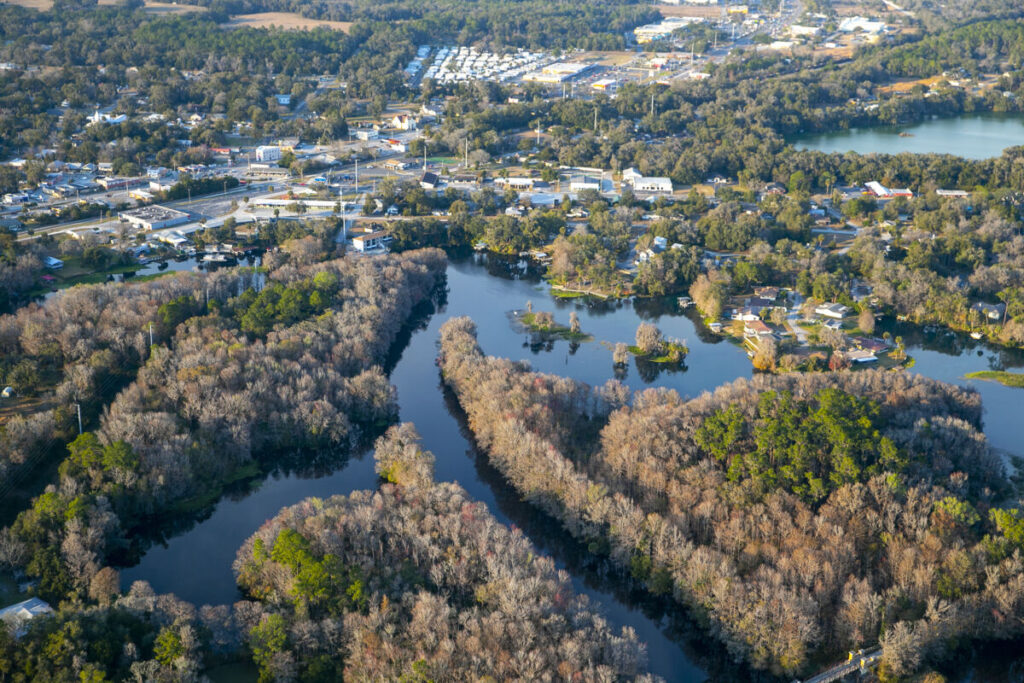 Downtown and the Rainbow river in Dunnellon on February 2. [Alan Youngblood/Special to Ocala Gazette] 2022.

The proposed northern extension of the Florida Turnpike has yet another opponent and this time it’s a government agency tasked with managing and protecting the state’s critical water resources– the Southwest Florida Water Management District (SWFWMD).

Swiftmud, the district’s commonly known moniker, covers 16 counties in the southern half of the state, including all or parts of Citrus, Levy, Marion and Sumter counties, each of which would be impacted by at least one of the proposed routes.

In a letter to Nicola Liquori, executive director of Florida’s Turnpike Enterprise, an arm of the Florida Department of Transportation (FDOT), the District said it was aware that all four of the proposed extension routes traverse District-owned conservation lands.

Two of the proposed routes cut north through portions of southwestern Marion County, while a third is just inside the county line south of Marion Oaks. The fourth route impacts portions of Citrus and Sumter counties.

“Any option that would bisect District-owned conservation lands or sever District lands from other existing conservation lands would be inconsistent with the original intent behind the use of taxpayer dollars to acquire those conservation lands,” Brian Starford, Swiftmud’s director of operations, lands, and resources monitoring division, said in the Feb. 14 letter.

The District said the purpose of the letter was to maintain communication between FDOT and the District….as well as memorialize the District’s position.

The major district conservation lands jeopardized by the proposed routes include the Halpata-Tastanaki-Preserve, Potts Preserve, Half Moon-Gum Slough and Two Mile Prairie, according to data provided by Susanna Martinez Tarokh, the district’s public information officer.

Located in Dunnellon, Halpata-Tastanaki Preserve is an 8,000-plus acre conservation area along the Withlacoochee River and includes a variety of native fauna and flora, Scrub Jay habitats and floodplain forests.

Also along the Withlacoochee, the 8,500-acre Potts Preserve has wetlands that play a role in both the Tsala Apopka Chain of Lakes and the Withlacoochee River systems, part of the Floridan aquifer’s recharge/discharge system. Additionally, the Inverness site provides habitat to wildlife, including a small population of threatened Florida scrub jays.

Half Moon-Gum Slough is located in Lake Panasoffkee in Sumter County, the Withlacoochee River, Gum Slough and Gum Springs Run are located adjacent to the property and were designated Outstanding Florida Waters in 1989.

In Hernando in Citrus County, the 2,900-acre Two-mile Prairie, lies along the southern bank of the Withlacoochee River at the northern end of the Tsala Apopka Lake system.

There may also be other smaller conservation easements that would be impacted by the current plan, Tarokh noted.

The proposed turnpike extension is a result of Senate Bill 100, which repealed the 2019 M-CORES (Multi-use Corridors of Regional Economic Significance) toll road mandate that required FDOT to build three new turnpikes in 2023.

However, the Bill still allowed FDOT to evaluate a new northern extension of the turnpike and directed it to commence a Project Development and Environmental (PD&E) Study with a report due to the governor, president of the Florida Senate and Speaker of the Florida House of Representatives by Dec. 31.

The planning phase began in October when FDOT publicized the proposed routes and asked for community feedback.

Swiftmud joins a growing chorus of robust opposition to the proposed extension from environmental groups such as Audubon Florida and Sierra Club Florida, grassroots campaigns including the No Roads to Ruin Coalition, as well as the City of Dunnellon and the Levy County Board of County Commissioners, among others.

Marion County Commissioners, however, decided against opposing the extension and opted to send a Dec. 21 letter to FDOT reminding the agency of the County’s adopted comprehensive plan that prohibits the development of expressways or toll roads within the Farmland Preservation Area (FPA) instead.

Even so, FDOT said the new toll road is needed to help alleviate congestion on I-75, manage future traffic increases due to Florida’s rapid growth and facilitate evacuations during hurricanes.

The proposed northern turnpike extension would begin at its current end at I-75 in Wildwood and includes:

● Route North A, almost double the length of the other proposed routes. would travel through north Sumter County, and run northwest through the northeast portion of Dunnellon into the City of Bronson in Levy County and end in Chiefland.

● Route North B, meanwhile skims west of Marion Oaks, running near the intersection of SR 200 and County Road 484, before heading north, curving west across SR 40 and U.S. 41 and heading southwest to U.S. 19 just north of Yankeetown.

● The 42-mile-long Central Route had a much wider potential path, traveling north into southwestern Marion County, then turning west and going across U.S. Highway 41 towards the Crystal River area.

● The proposed South Route takes a direct westward path from Sumter County towards Inverness in Citrus County, then travels north to U.S. Highway 41.

In the letter, Starford wrote the District understands that FDOT is continuing discussions with environmental groups and interested parties to consider an alternative corridor(s) that would minimize impacts to existing conservation lands to the greatest extent possible.

“We appreciate FDOT’s willingness to consider an alternative option,” he said.

“Accordingly, the District urges FDOT to take into consideration the District’s position regarding the routes being proposed for the Northern Turnpike Extension,” wrote Starford.