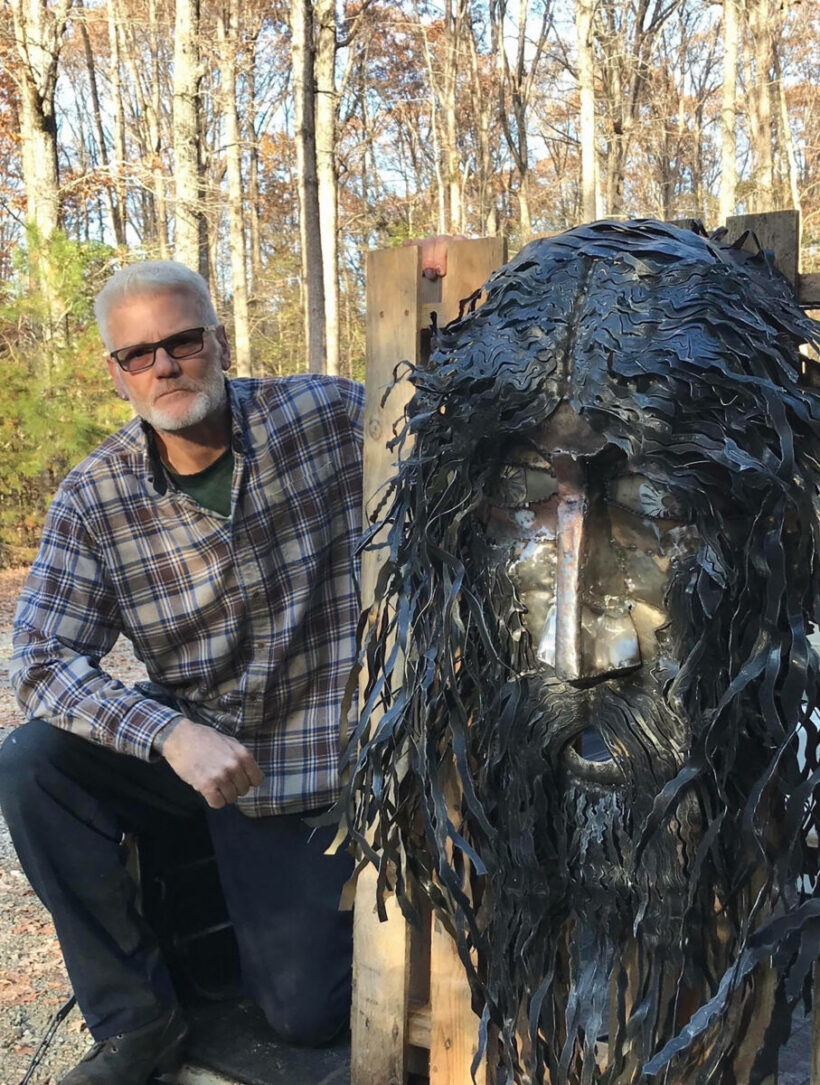 Bo Woods with “The Viking,” a work made from two 55-gallon drums. Its buyer asked him not to apply a finish to it. “He wanted patina to consume it.” 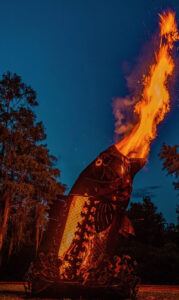 The certified heavy equipment mechanic and mixed media artist was born in Radford, Virginia, “above Charlottesville, way up in the mountains.” He split his childhood between Virginia and Florida, spending a good deal of it surfing the Atlantic Ocean waves off Cocoa Beach.

Now 58, Woods works for himself and knows how to build a motorcycle by hand, a skill that has garnered him national awards.

During his youth, Woods listened to punk and heavy metal. The counter-culture music of the surfer-skater scene might have had more of an influence on his art than the art scene itself.

“I’m a more extreme-type person than I am a culture person like that,” he said. “I still ride a BMX bicycle almost every day.”

Woods said he became a professional artist by accident, though he drew pictures his entire life. As a welder and mechanic for John Deere, he learned how to avoid flaws.

“The flaws that you would have to go rework on a job in the industry are exactly what I use to create my art,” he said.

Of his art training, “no one’s ever taught me to do this side of it,” he said. “Everything that I do now is exactly what I was taught not to do as a professional in the industry.”

His Instagram account, @Broken_Face_Fabricator, gets its name from a scar that resulted from the removal of a birth defect on the side of his mouth. The scar also inspired the cartoony self-portrait on his business card. 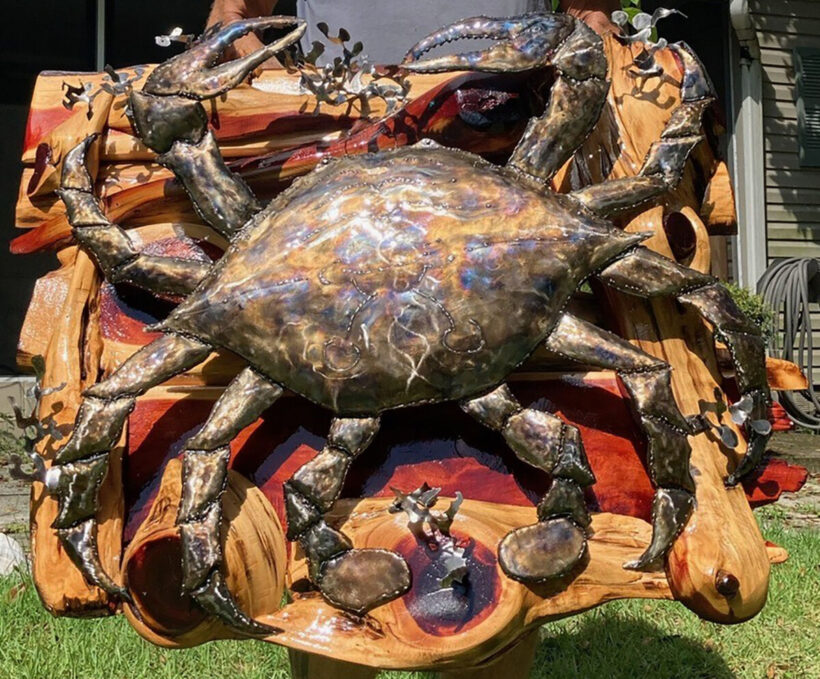 “Cedar Reef Crab” includes 18-gauge flat steel cut by hand with a plasma cutter. The base includes raw-cut cedar, stainless steel strapping and a cable hanger on the back. “With all my art, I use my handmade hammers and dyes to shape the metal, and weld for design and heat for color,” Woods says.

“My whole life, I was teased for it and got into lots of fights,” he shared. “But being a fabricator with a broken face seems right.” 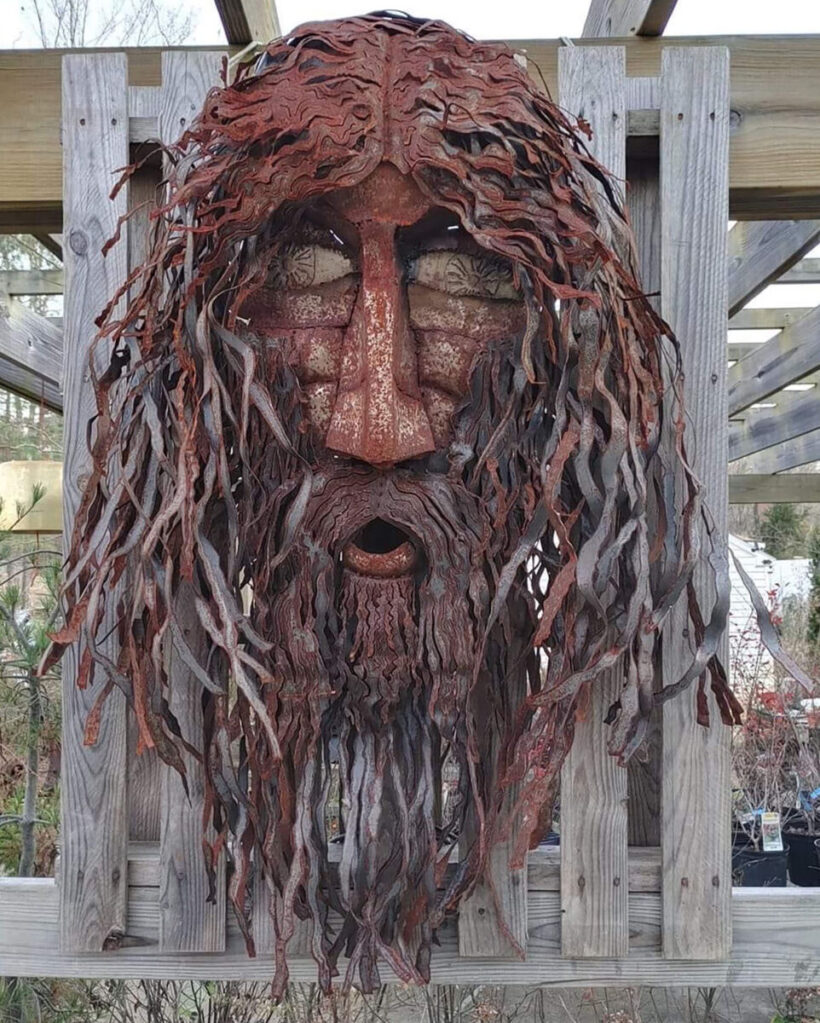 “The Viking” as it looks now — “it does look that it’s been through war,” Woods said.

Woods has been creating metal/mixed media for five years. During that time, he has created a variety of creatures and figures. His giant bass firepit sculpture illuminates the campgrounds of Camp Mack, the Guy Harvey fishing lodge, RV campground and recreation event venue along the Kissimmee River in Lake Wales. He recently showed his work locally at Fine Arts For Ocala’s (FAFO) Ocala Art Festival.

While many of his pieces just have clearcoat, others have color. He often uses heat to create iridescence.

“It looks like gasoline floating on top of water. … It’s purple, it’s gold, it’s blue. I heat the steel ‘til it turns colors and then I seal it with a clearcoat so it almost looks like it’s under glass.”

Navigating the professional art world has been a learning process. Woods expressed his disenchantment with curators and festival organizers who harp on commissions. He prefers the spirit of community-run art events, and said, “That we support towns and help them put on events.”

Recently remarried, Woods and his wife, Nicola, live on 8 acres in Ocklawaha.

“It’s pretty secluded and we’re in the very back of the property,” he said. “I absolutely love it.

The father of a 15-year-old daughter, twin boys that are 25 and a 29-year-old daughter beams about his children and assured that they have all been supportive of his sculpture-making routine.

“All of them have some of it,” he said, “and I think building motorcycles, always building and doing the things I did while they were growing up, I don’t think they look at the art like it’s just a different thing that I’ve done because they’ve seen me do a lot with what I used to before. They would say, ‘Dad, will fix it. There’s nothing he can’t fix.’ So, I was, you know, that guy.”

All of Woods’ kids grew up riding BMX motorcycles.

“I believe that when you keep the family together and do things that they’re interested in, kids don’t venture and do stuff they shouldn’t. … I’m blessed. I have incredible children. My oldest daughter just gave me my second grandchild!”