Editors note: This report has been updated to include a statement by Rabbi Yossi Hecht and the telephone message by Mayor Kent Guinn. 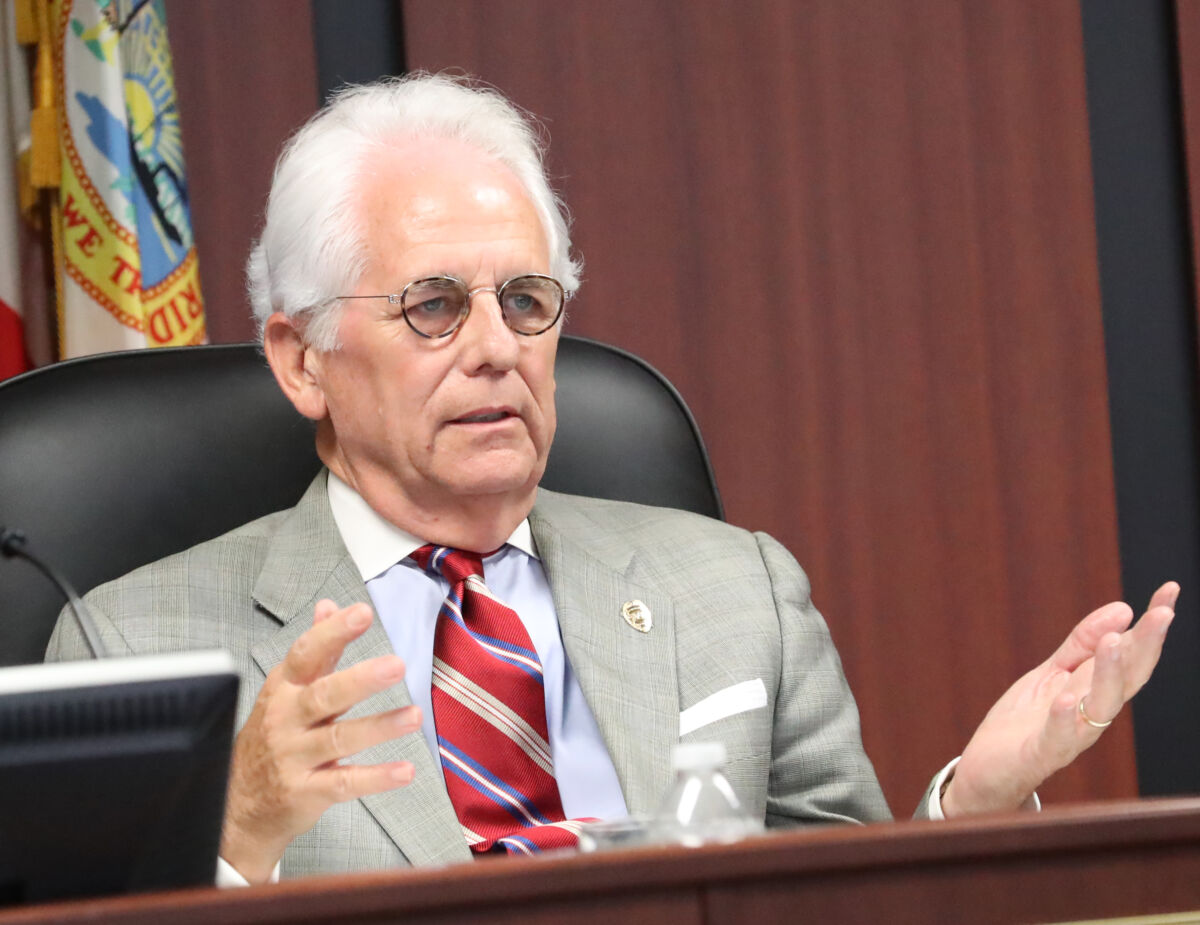 Community members are upset after campaign vitriol was introduced into the City of Ocala’s Hanukkah celebration on the downtown square.

During a program to light the menorah, Mayor Kent Guinn made disparaging remarks aimed at Manal Fakhoury, his opponent in the September mayoral electoral race, according to several spectators present at the Nov. 28 event.

Guinn won the Sept. 21 election with over 65% of the vote. Fakhoury had 34%. Gazette columnist, Sadie Fitzpatrick, a lifelong Ocala native, wrote of this year’s city election “as being the most vicious local political race in recent memory.”

Event attendee Suzanne Scheraga said of Sunday’s event that “The mayor went to great lengths to say that his opponent in the election, Manal Fakhoury, was…he actually came out and said that all the organizations that she works on are a front for Hamas.”

Hamas, or Islamic Resistance Movement, is a militant Palestinian nationalist and Islamist movement in the West Bank and Gaza Strip that is dedicated to the establishment of an independent Islamic state in historical Palestine.

Fakhoury is a Muslim woman who has lived in Ocala for at least 30 years. She has raised all five of her children in Ocala, is a business owner and well-known philanthropist.

Scheraga said that 50 to 60 people were present during Sunday’s lighting ceremony, adding that Mayor Guinn made these comments when he was addressing the crowd from the gazebo in the square.

“Everybody heard it. It was obviously said to the crowd,” added Scheraga. “I got so infuriated after the mayor made those comments that I got up and walked away.

“It was supposed to be a celebration for the holidays, of Jewish freedom,” she added. “[The mayor’s comments] were totally inappropriate. It’s not like it was before the election. This is after—it’s over. It’s done. She’s defeated. Why do you have to bring up Hamas?”

Other speakers during the ceremony’s program included Rabbi Yossi Hecht, co-director of the Chabad Lubavitch Jewish Center of Florida, and Senator Dennis Baxley, who represents District 12.

Preceding Guinn’s prepared remarks, Hecht made a disparaging comment about Fakhoury as well, according to several citizens present at the ceremony.

“He said something [to the mayor] in regards to him being elected. He said he was elected because his opponent [Fakhoury] didn’t like Israel,” said Scheraga.

Jill and Rick Carel were also present at the event and heard both comments made by Hecht and Guinn.

“It was horrible,” said Jill. “My husband and I were both horrified at what was said by both the rabbi and the mayor. We actually shouted out, ‘Boo.’ Not that it made any difference,” adding “The mayor said Manal Fakhoury is a front for a terrorist organization—someone who has done so much for this city.”

According to Jill, the mayor left the event soon after delivering his prepared remarks.

“It was about lighting the menorah candles, and showing support for the Jewish people and a Jewish holiday. But using that platform to say anything political is wholly inappropriate, let alone demonizing Manal Fakhoury, who is an excellent citizen of our city,” she said.

Her husband, Rick, who is president of The Jewish Club of On Top of the World, as well as a member of Temple Beth Shalom, said he was shocked at what the mayor said.

“I heard him express disgust, disdain for the unproven and unfounded accusations that [Fakhoury] is a regular supporter of Hamas,” said Rick, who expressed strongly that his opinions are his alone and do not represent those of The Jewish Club or Beth Shalom. “You would have thought that he had defeated Hamas in the election and not someone who has been involved in making Ocala a better place to live.”

“This is a country of freedom of religion, and freedom from religion. You’re free to practice whatever you want or nothing at all,” Rick concluded. 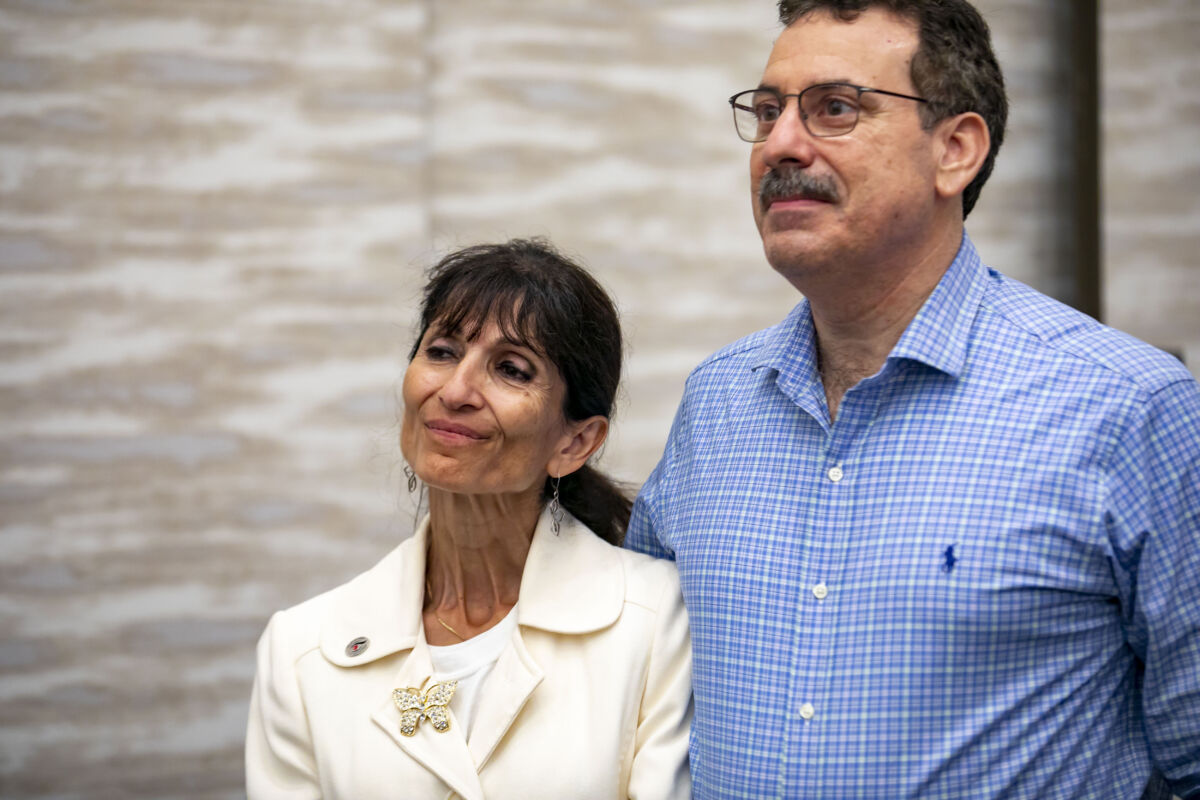 In this file photo, Manal Fakhoury, left, and husband Riadh Fakhoury, listen as her loss in the mayoral race was announced on Sept. 21. [Alan Youngblood/Special to the Ocala Gazette]

Bonnie Schirmers, who lives in On Top of the World, said the mayor’s comments spoiled the whole event for her.

“Mayor Guinn couldn’t even comment on how lovely an evening it was or how he supported and appreciated the group and so on,” Schirmers said. “He steered off into…it’s like he took a page from [Donald] Trump’s book. He started disparaging his opponent, even though the election ended in September.”

She added, “He won the election. It’s over—let it go. I didn’t feel it was necessary for him to make what I thought was an overtly political statement—an unsubstantiated statement. Such bad taste. It was totally out of place.

“If that’s the kind of event that downtown Ocala wants to put on, on what should be a holiday celebration, then no—I won’t go again. I think he needs to apologize to his opponent.”

When reached for comment to ask how Fakhoury came up at the menorah lighting ceremony on Sunday, Mayor Guinn said via phone call, “We’re done. Goodbye,” and hung up. Guinn reached out to the “Gazette” on Dec. 1 to say that he apologized personally to two individuals quoted in this story but said he stood by his remarks made on Sunday.

Fakhoury said via phone call on Nov. 30 that “Many of us have seen this side of [Guinn]. We’ve seen and heard it. It’s just another tactic used to create division in this community.

“And that’s precisely why we need new leadership,” she added.

A statement released to the “Ocala Gazette” by Rabbi Yossi Hecht:

On Sunday November 28, 2021 we celebrated Chanukah with the Ocala community in the Ocala City Square.

Each year we hold a Chanukah gathering in the square and light the giant 12 foot Menorah. The Menorah is a Jewish symbol of light and freedom for all people .

We are grateful for city and county public officials who participate each year and share messages of hope and freedom. We appreciate Mayor Kent Guinn who has participated every year since 2009. This year he reiterated how important the Menorah is to him as his father in law was a Holocaust survivor and understood the importance of freedom.

His talk also included a message which was perceived by some as political rhetoric. Yet the Menorah lighting is not a political event but one that unites our community. Again, we thank Mr. Guinn for participating this year as every year.

The eight day Chanukah holiday continues until December 6th. We hope and pray that this Chanukah will bring even more light and hope to our community.