Skip to content
While Marion County ranks 48th for COVID-19 cases per 100,000 people among Florida’s 67 counties, its death rate by the same measure is in the top ten.

The county ranks ninth-highest in deaths per 100,000 since the start of the pandemic, according to state and local health agencies statistics compiled by the New York Times.

The simplest explanation for the high number of deaths is that the county has a high percentage of older residents, a group more vulnerable to the virus.

In the state, Marion has the 10th-highest percentage of residents 65 and older, according to the US Census Bureau’s 2019 five-year American Community Survey estimates.

And 86% of all COVID-19 related deaths in the county have been people 65 and older.

“Look at the ages for Marion County,” Florida Department of Health in Marion County Administrator Mark Lander said. “I mean, you think about we have a pretty significant population, over 100,000 individuals that are 65 and older. Then look at the actual percentage of where the highest deaths have occurred.”

But that doesn’t explain the disparity. There are counties with a higher percentage of older people that have had much fewer per capita deaths than Marion County. Sumter County, Charlotte County and Sarasota County have all had fewer deaths per 100,000 people while having a large percentage of seniors than Marion. 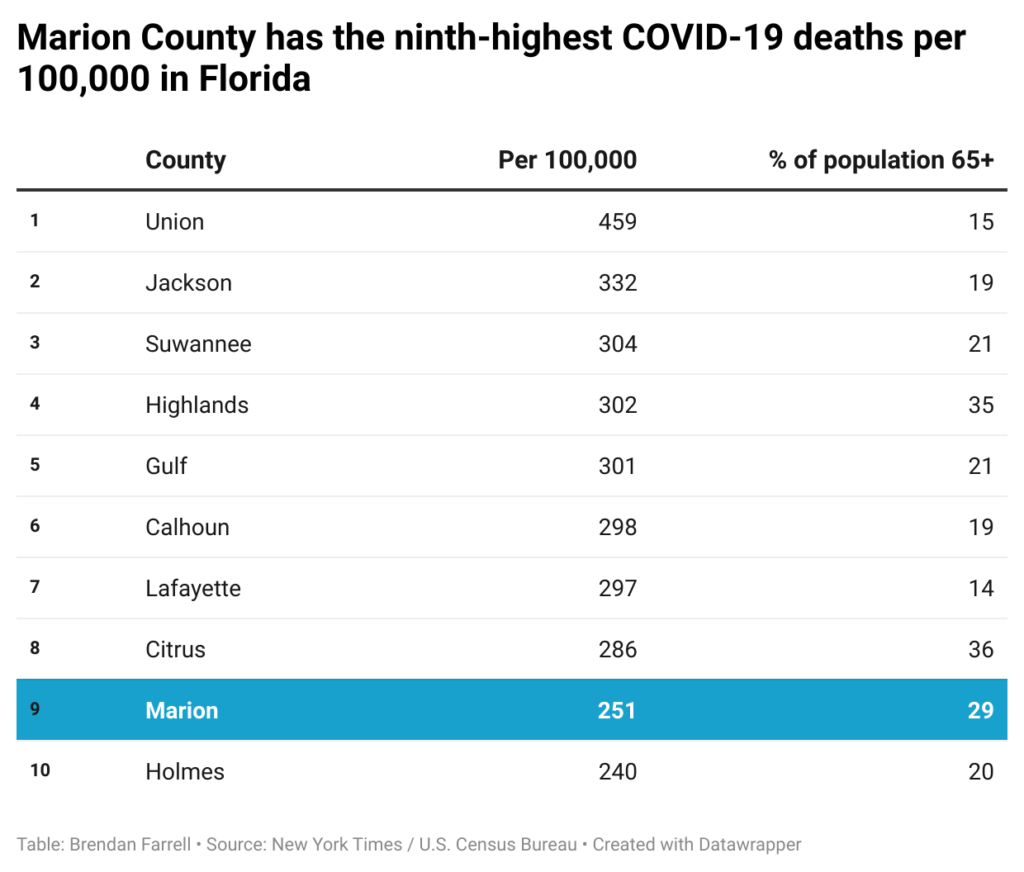 Dr. David Kuhn of the Trinity Clinic has tracked the county’s numbers since the start of the pandemic. He issues a near-daily update on his Facebook page. He said the stark difference between Marion County’s cases and deaths may be because there were many more COVID-19 cases that went unconfirmed.

“I think the thing that may be driving it the most is that there’s more cases of COVID than we knew about, and so our death rate may not actually be higher. It’s just that the known case fatality rate is higher,” Kuhn said. “If you include those that we didn’t know about, then it’s entirely explainable, 100% explainable. But again, it’s entirely abstract. You just don’t know how many people have had the virus but didn’t get tested.”

Kuhn explained that some people don’t get tested because they either don’t know they have it, don’t believe the virus is dangerous or are just afraid to get the test. All of those factors mean that testing is biased toward those who already show symptoms.

“It’s not that there’s not availability to do the testing. People are opting to not get tested,” Kuhn said. “If a person doesn’t believe that this virus is real, or, you know, they don’t want to know if they have it, they don’t want anybody to know that they got it. You know, whatever reasons are that a person has that they opt not to get tested, it’s not really an availability thing anymore.”

Compounding the issue is that Marion County is one of the unhealthiest counties in the state. The county ranked 53rd among 67 counties in health outcomes in the University of Wisconsin Population Health Institute’s County Health Rankings.

According to the rankings, Marion County has an adult obesity rate of 30%, above the state figure of 27%. Marion rated poorly in physical inactivity and access to exercise opportunities. Additionally, the county had higher numbers than the state in adults reporting poor or fair health (21% versus 17%) and average days of physically poor health in the last 30 days (4.4 versus 3.7).

All of that puts a sizable portion of Marion County’s population at risk for COVID-19.

“You can’t attribute it to only that we’re older because we aren’t the only one that’s older,” Kuhn said. “You can’t attribute it to only the fact that we’re unhealthier on average because there are others that are unhealthier. You have to look at all – I think it’s all of it. I think it’s a little bit of each. A little bit of each has resulted in more death in Marion County than numbers indicate we ought to have had.”

Hotwheels has no speed limit. The moment the pooch is...

Gallery: Hotwheels At The Humane Society of Mar...

The dog was brought into the Humane Society with a...

TALLAHASSEE – Gov. Ron DeSantis and the Seminole Tribe are...

The Marion County Commission recognized the county employee of the...
Ocala Gazette Homepage

Gov. Ron DeSantis and the Seminole Tribe are set t

The Florida House on Wednesday passed a bill that

At first losing their daughter was difficult for t

A Senate committee this week narrowly approved a m

A bill that would expand a list of legal holidays

On Tuesday, the Ocala City Council approved an ame