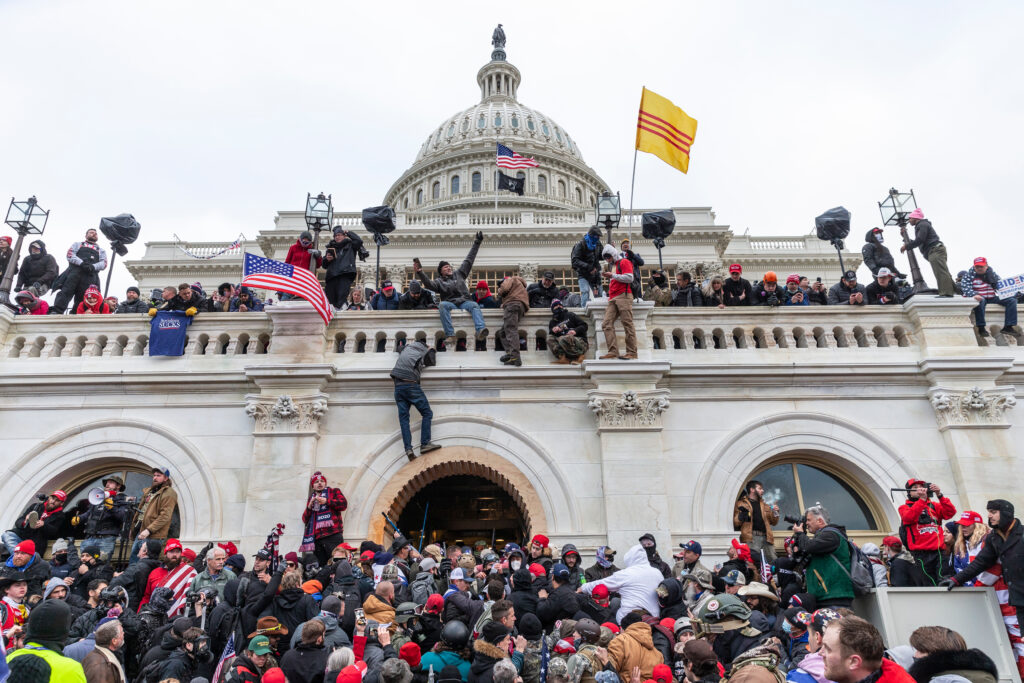 The U.S. Capitol on Jan. 6 as protesters breached the building. [File photo]

The U.S. Capitol on Jan. 6, as protesters breached the building. [File photo]

The recent arrest of two Marion County residents brings to six the number of local people charged in the Jan. 6 Capitol riot.

The list includes a convicted felon, a doctor and two couples with ties to far-right groups.

More than 500 arrests across the nation have come after the riot, which saw protestors break into the U.S. Capitol as legislators voted to certify Joe Biden’s presidential win. Many of the rioters were supporters of President Donald Trump. Five people died in the riot, including a Capitol Police officer who died after suffering a stroke. A protestor died after she was shot by an officer, and three other demonstrators died of natural causes.

Many of the arrests have come after tips from the public and sometimes family members.

Jamie Buteau, 48, and Jennifer Buteau, 44, of Ocala are the most recent arrests. The FBI filed charges on June 22 in connection to the Capitol incident. The couple were avowed QAnon conspiracy believers and even appeared in a documentary about the movement in 2018. Officials got a tip from someone who recognized them from their segment in the production.

Kenneth Kelly, 58, of Ocala was arrested on April 23 after officials received a tip from a relative reportedly identifying the man as being in the Capitol. Kelly turned himself in to authorities. Kelly is an internal medicine doctor who practiced in Ocala.

He was working at AdventHealth Ocala but is no longer with the hospital, according to a hospital spokeswoman. His Florida medical license was first issued in 2019 and remains clear and active, according to state records. He has no history of discipline or public complaints, records show.

Kelly Meggs, 52, and Connie Meggs, 59, of Dunnellon were arrested on Feb. 17. The couple is self-described members of the Oath Keepers, a group that swears to “defend the Constitution against all enemies, foreign and domestic.” The Meggses allegedly attended training to learn paramilitary combat tactics in advance of the Capitol riot.

Michael Curzio, 35, of Summerfield was arrested the day of the riot in Washington D.C. He traveled to the scene with a friend and posted on social media before making the trip.

“If anything happens – we get (expletive) up, arrested, or killed – just know I love you all and I did what I believed in,” according to a Facebook post. “And if you know me, I did it because it was the right thing to do.” Curzio served eight years in prison on a charge of attempted first-degree murder.

So far, Florida is leading the nation in arrests tied to the Jan. 6 incident with 47, according to information from the U.S. Department of Justice as of June 29.

Texas ties Pennsylvania with 42 arrests and New York is next with 37 arrests, according to records.

The FBI continues to try to identify those who participated in the incident. They established a website where people can view images of video captured on Jan. 6. Visit https://www.fbi.gov/wanted/capitol-violence to view the images. Anyone with information to share can call 1-800-CALL-FBI (800-225- 5324) or visit tips.fbi.gov.

The Allegations and Charges: 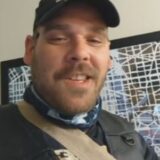 Michael Curzio was among those in the front of a group that entered the upper level of the United States Capitol visitors center near the door to the House atrium, according to an affidavit by a member of the Capitol Police.

Capitol Police officers ordered the crowd to leave. The crowd “willfully” refused the order. Curzio and six others were arrested and issued citations to appear.

Curzio has pled not guilty and remains free on bond. A status conference was scheduled for July 1, at 9:45 a.m. Details of the conference were not available at press time. 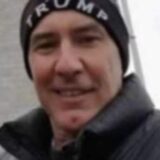 Kenneth Kelly reportedly drove to Washington, DC from Florida “knowing full well they were going to break in,” according to the relative that reported him to the FBI.

The unnamed witness also provided text messages that had photos reportedly from Kelly stating, “breaking into the Capitol building via smashing windows.”

Using GPS information, investigators were able to track Kelly’s phone in the Capitol from 2:56 to 3:09 p.m. on Jan. 6. Surveillance video stills also show a person that appears to be Kelly entering the Capitol and walking through the halls while holding a cell phone.

Kelly is represented by George E. Tragos. He was released on $25,000 bond with instruction to check in with the court once a week.

Kelly also had to surrender his passport and his travel is restricted to the Middle District of Florida and the District of Columbia, unless he receives special permission. 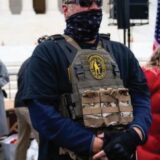 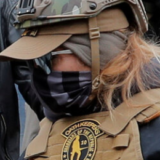 Kelly and Connie Meggs’ arrests became one of the highest-profile cases.

The media attention was so intense that a judge threatened a gag order.

“The fact is, these types of statements in the media have the potential of affecting the jury pool and the rights of these defendants, and the government, quite frankly, in my view, should know better,” said Judge Amit P. Mehta.

According to their indictment, the Meggses, and 10 others charged with them, conspired to “stop, delay, and hinder Congress’s certification of the Electoral College vote” as early as Nov. 3. On Dec. 22, Kelly Meggs wrote a series of messages on Facebook to another individual that read, in part:

On Jan. 6 they joined others to “form a stack of individuals wearing Oath Keepers clothing, patches, insignia, and battle gear. Together, the stack maneuvered in an organized and practiced fashion up the steps on the east side of the Capitol—each individual keeping at least one hand on the shoulder of the other in front of them,” according to the indictment.

The group eventually entered the Capitol, according to officials. While Connie Meggs was released on bond, Kelly Meggs remains in custody.

Connie Meggs must wear a GPS monitor and other than court, church, grocery shopping and seeking employment, she is restricted to her property. She can have no contact with Oath Keepers, and can have no access to computers, smartphones, tablets or any device that would allow her to communicate through either encrypted or non-encrypted applications. 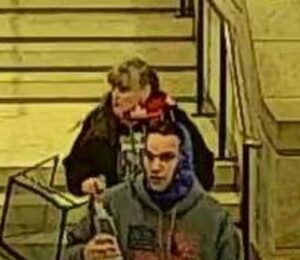 Jamie and Jennifer Buteau were seen on closed-circuit television entering the Capitol on Jan. 6 at about 2:25 p.m., according to the charging documents.

They entered the building through a broken door in the Senate wing. Minutes later, Jamie Buteau is accused of throwing a chair at Capitol Police officers as they rolled down metal doors to close off an interior passage. While the video does not show Jamie Buteau throw the chair, the timing of the event shown through surveillance and online videos makes it clear he threw the chair, reports state.

Jamie Buteau is then seen dragging another chair around the building before the couple leaves the Capitol through the south door at about 2:46 p.m., according to reports.

Jamie Buteau was additionally charged with obstruction of law enforcement during civil disorder, assaulting, resisting, or impeding officers, engaging in violence on restricted grounds, and engaging in violence on Capitol grounds. Jamie Buteau was released on $25,000 bond. He was ordered to wear a GPS monitor and is prohibited from traveling to Washington, D.C., except as related to his case. He also had to surrender his passport. Jennifer Buteau was released on $25,000 bond.