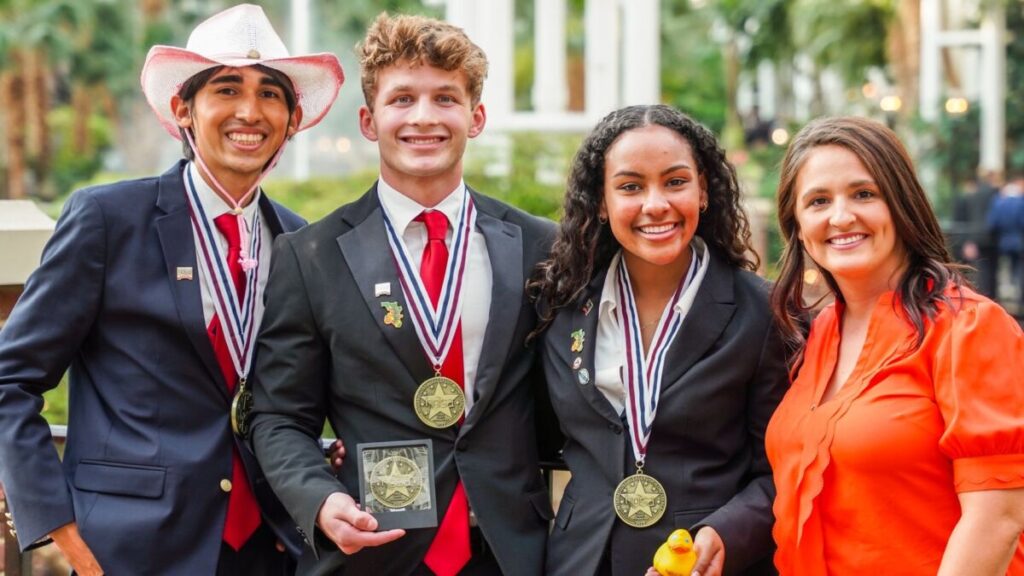 Several future health professionals from Marion County schools took to the stage of an international competition—and came home with several accolades to show for it.

Health Occupations Students of America (HOSA), an organization to foster the study of health sciences for students, hosted its International Leadership Conference in Nashville, Tennessee. Students from Belleview, Vanguard and West Port High Schools placed in the top three for a variety of health-related competitions.

West Port High School teammates Luis Castaneda, Kayla Anthony and Tyler Pinkowski won first place in the category of Best Public Service Announcement video. The team’s winning video focused on the importance of bone marrow donation and how it may save the lives of those afflicted by diseases that may benefit from bone marrow transplants.

“It’s more than just the competition. This is a really, really important topic of discussion,” Castañeda, now a graduate of West Port, said. “We got to see a first-hand account of a story between a woman with children who was dying from a disease that bone marrow cured, and she was able to meet her donor for the first time, so it was really beautiful.”

Castañeda had been involved in HOSA since he was in the eighth grade at Liberty Middle School. He said that even though he does not plan to go into the medical field, he has a personal connection with health sciences that fueled his passion for studying it.

“[Gleason] knows how to handle children and is really direct with it. At the end of it all she says, ‘love you, mean it,’ and so that’s something I’m going to take with me for the rest of my life,” he said. “Getting to be able to experience that one last time, achieving that feat, getting that far and feeling all those emotions that last time was really amazing.”

“All of our efforts paid off. Knowing that this was one of the main competitions there—it felt pretty good,” said Sandrapaty, a rising senior. “I learned a lot about teamwork and leadership, and minor difficulties that come along the way.”

One big difficulty—the COVID-19 pandemic—caused the competition to be hosted remotely for the past two years. Sandrapaty said that the students all expressed immense gratitude not only for competing at the international level, but for the ability to travel to Nashville and experience the event in person.

“We had some trouble initially trying to find members, but we were able to organize tryouts. After organizing the material and contacting some friends who could be somewhat of a competition, we were able to make a study plan and meet daily,” he said.

West Port is not the only school in which its HOSA members had a taste for victory—both Belleview and Vanguard High Schools competed and placed at the international level. Rushi Patel, now a graduate of VHS, placed second in the medical math competition.

While many portions of the International Leadership Competition were team based, Patel’s role in the medical math section required him to show off his knowledge in a solo examination. He completed a written test of 50 questions based on many numerical aspects of health science, including dosages, statistics and body surface area amongst others.

Patel was the president of the Vanguard chapter of HOSA for the past two years until his graduation. He said that being a part of the organization gave him the foundation of knowledge and interpersonal connections he needed to continue in the medical field after high school.

“While I did learn a lot about the medical field and the process of becoming a doctor, I think I learned more about what actually drives everyone around me to work in different medical professions,” Patel said.

Patel said that now that he has graduated from Vanguard and said goodbye to HOSA, he plans to study biology in college and eventually go to medical school.

Emilie Holmes, a rising BHS sophomore, placed first for best health career display along with her partner, Hannah Deen. The theme of the duo’s display board was cardiothoracic surgery. It featured a model of an open chest cavity covered by a blue draping fabric surrounding the surgical field. The display board was inspired by Holmes’ aspirations to become a cardiothoracic surgeon one day.

“When we were completing our project, we were conversing with one of our classmates and she disclosed to us the story of her younger sister, who was born with a congenital heart defect,” Holmes said. “Hearing that story of how a cardiothoracic surgeon impacted her, her family and the patient and just having those experiences really inspired me and drew me to that profession.”

Holmes said that while much of the praise for these excellent accomplishments is owed to the hard work and dedication put in by her and her fellow HOSA members, some of the credit must go to the school district that educated them.

“We definitely have some very great prospects and so many people that are going to do great things in Marion County, and I feel like to have these opportunities to have Marion County represented like this at the international level is just great,” Holmes said.

After days, weeks and months of preparation put in by teams from all over the world, teams from three high schools right here in Marion County took home some of the highest awards these future health professionals could earn.

“I think it’s very inspiring to show them that even though we may come from more of a rural area, we can still compete at these levels and do just as good,” she said.