Just 44% of the county’s third graders scored “satisfactory” or above on the statewide exam, according to results released by the Florida Department of Education.

The state average was 54% “satisfactory” or above.

While the state average fell by four points from 2019, Marion County’s results remained the same. The state did not give the test in 2020 due to the COVID-19 pandemic.

Of the 67 Florida counties, 55 had worse results while eight remained the same and just four improved.

While Marion was able to avoid the so-called “COVID slide” its score ranked 10th from the bottom.

St. Johns county has the best results at 78% proficiency, while Jefferson County scored the lowest at 28%.

Some individual Marion County schools did take a tumble in scores. Madison Street Academy and Dr. N.H. Jones Elementary dropped from the 90s in percentage proficiency to the 70s. Madison fell from 93% in 2019 to 78% this year, while N.H. Jones went from 93% to 72%. Madison and N.H. Jones remained one and two respectively for the best scores in the county.

Other steep drops came at Reddick-Collier Elementary, which dropped form 45% proficiency to 28%. 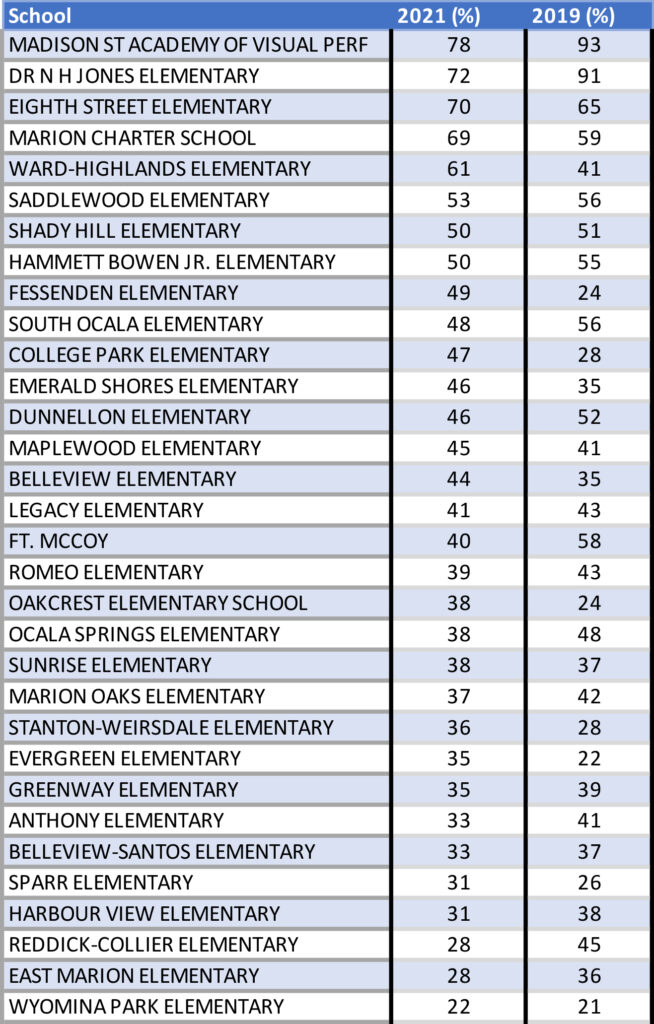 Despite the overall drop in scores, the DOE touted the results as evidence of the importance of keeping schools open through the COVID-19 pandemic.

Under an emergency order issued by the department in April, accountability measures were waived for all state exams administered to students this year. The department said the exam’s results instead will “help policymakers understand the reading achievements and deficiencies of Florida’s Grade 3 students.”

Results from other statewide assessments, including math and science, will be published no later than July 31, according to the department.

The News Service of Florida contributed to this report.