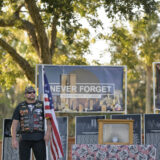 Marion County organizations will mark the 20th anniversary of the Sept. 11, 2001, terrorist attacks with several events during a weeklong commemoration.

Here’s a list of the programs and services planned:

The Friends of Marion County’s Veterans Park, along with community sponsors Hospice of Marion County and Hiers-Baxley Funeral Services will host a series of programs throughout the week at the Ocala Marion County Veterans Memorial Park at 2601 SE Fort King St.

The observances will begin Sept.10, when several hundred motorcyclists from veterans’ groups escort the 9/11 Traveling Wall from War Horse Harley Davidson to the park. The Wall will be on display through Sept. 19.

Opening ceremonies on Sept. 11, will begin at 8:30 a.m. The program, which will include an honor guard and the playing of the national anthem, will also mark the impact times for each of the planes in the attack.

On Sept. 12, events include a 10 a.m. First Responders Chaplain Corps Service; a 3 p.m. performance by the Kingdom of the Sun concert band and a 6 p.m. concert by Joan Crowder and Friends.

A Meet Your Hometown Heroes program will begin at 10 a.m. on Sept. 14.

On Sept. 16, the Traveling Fallen Heroes Wall will make its way to Veterans Park and will be set up alongside the 9/11 Remembrance Wall. The Fallen Heroes exhibit is interactive and honors military personnel who have died in the line of duty since 9/11.

Meanwhile, Sept. 17 programs will include a PTSD support group meeting at noon, an MIA/POW ceremony at 3 p.m., a survivors share stories program at 4 p.m., and a concert by the Delta Rose Band at 6 p.m.

On Sept.18, Veteran’s Appreciation Day, a Veterans’ Prayer Service will take place at 10 a.m., followed by an American Flag storytime with Betsy Ross and George Washington along with a flag etiquette and flag-folding demonstration at 11 a.m. and 1 p.m. Participants will receive an American flag and a keepsake Pledge of Allegiance card. At 2 p.m. a Four Seasons concert will take place, at 3:30 p.m. a concert by Music by Barry will be held. The movie, “Taking Chance,” will be shown on the Jumbotron.

Closing ceremonies at Veterans Park will be held at 10 a.m. Sept. 19 with a First Responders’ Chaplain Corps Services, followed by the closing ceremony at 1 p.m.

In other areas of Marion County, the City of Belleview will mark the 20th Anniversary of 9/11 beginning at 10 a.m. on Sept. 11 with a ceremony honoring first responders, followed by a walk of remembrance around Lake Lillian.

The program will include a Presentation of Colors by Belleview High School ROTC, the Pledge of Allegiance, and the singing of the Star-Spangled Banner by Autumn Encarnacion.

In Summerfield, the FDNY 343 Memorial Club, organized to remember the 343 firefighters who died at the Twin Towers, will host its annual 9/11 Remembrance Ceremony at 10 a.m. on Sept. 11 at St. Mark the Evangelist Church, 7081 SE Highway 42. The program will honor all civilian and uniformed personnel who made the ultimate sacrifice on Sept. 11, 2001.