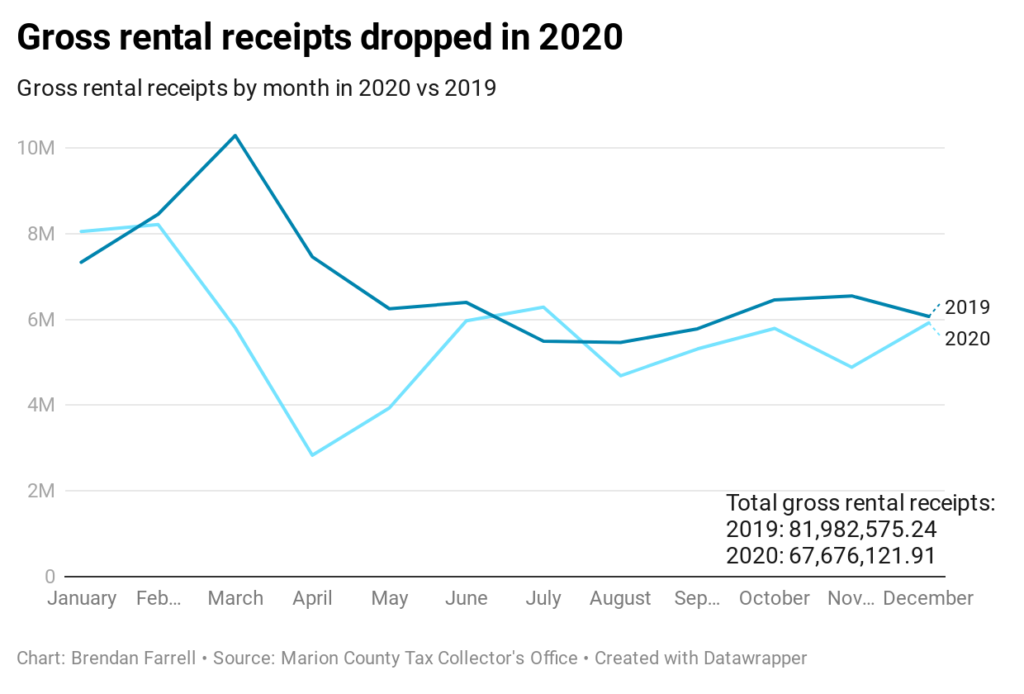 COVID-19 took its toll on Marion County’s lodging industry, but it could have been worse.

For 2020, revenue generated by area hotels, motels and short-term rentals dropped more than 17.4% compared to 2019, according to numbers provided by the Marion County Tax Collector.

Visitors to the state, however, dropped 34% in 2020, compared to the prior year, according to Visit Florida, the state’s tourism marketing agency.

In the county, lodging rented for less than six months reported more than $67.67 million in rental income, compared to $81.98 a year earlier, the tax collector report shows.

“It is not crazy bad,” said Danny Gaekwad, a local hotelier who owns several hotels, including the Hilton Garden Inn in downtown Ocala.

Gaekwad said weekend business has picked up, but the weekday corporate stays have stayed low.

“Weekdays are a killer,” he said. “Business is not so good, but when you look at what could be, you better stay happy.”

Lisa Lombardo, a spokeswoman for HDG hotels, which operates seven hotels in Marion County, said they were also doing “ok.”

“We’re not back to 2019 numbers by any means, but President’s Day weekend was a great weekend for Marion County hotels,” Lombardo said. “We’re still trying to muddle through, but there’s a lot of promise for markets like Ocala, Marion County that have a lot of eco-tourism and other things to offer visitors.”

The local fourth-quarter numbers showed some strength. Between October and December, gross rental receipts totaled more than $16.5 million, compared to just more than $19 million in 2019, a 15% drop.

While significant, the drop was not as perilous as that suffered early in the pandemic. State-mandated shutdowns threw the industry into chaos. Locally, April was the cruelest month as short-term rental receipts dropped more than 63% year-over-year, according to the report.

Gaekwad said Gov. Ron DeSantis’ move to start reopening the state in May, helped minimize the losses. The phased approach to reopening concluded in September.

“We are lucky in the state of Florida,” he said, stating others were not so fortunate.

He said a fellow hotelier with 22 properties in New York and New Jersey is currently facing foreclosure on all of them.

Locally, the drop in annual revenue also translates into a 16.1% decline in tourist development tax money. The 4% tax on short-term rentals dropped to more than $2.6 million in 2020, compared to more than $3.1 million a year earlier. The Ocala/Marion County Visitors and Convention Bureau uses the money to attract tourism to the county.

According to Visit Florida, 86.714 million people visited the state in 2020. That was the lowest annual total since 2010.

Visit Florida President and CEO Dana Young said an estimated 20.625 million travelers in the fourth quarter “exceeded our expectations.” But he warned the figures are not final.

Still, Young remained optimistic as the state continues to slowly expand marketing efforts across the nation.

The News Service of Florida contributed to this report