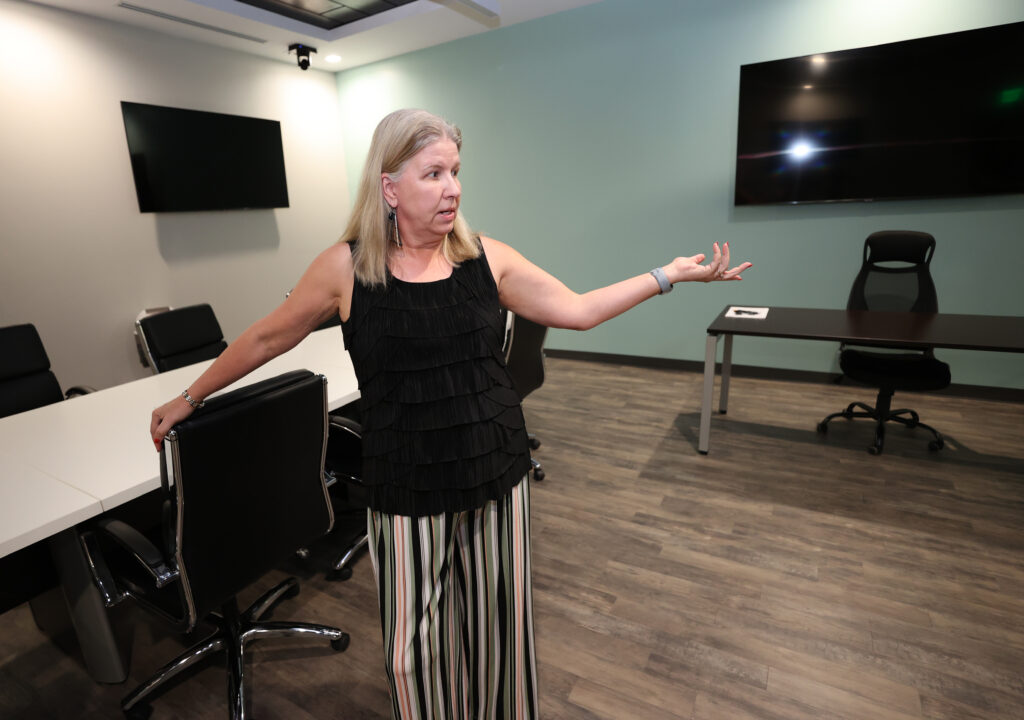 Dolly Dockham, the executive assistant, describes some of the upgrades in the executive boardroom at the Marion County Hospital District new location that is adjacent to the Heart of Florida Health Center on East Silver Springs Boulevard in Ocala, Fla. on Monday, Feb. 8, 2021. The Marion County Hospital District recently moved into the new facility. [Bruce Ackerman/Ocala Gazette] 2021.

Dolly Dockham, Marion County Hospital District’s executive assistant, describes some of the upgrades in the executive boardroom at the district’s new location adjacent to the Heart of Florida Health Center on East Silver Springs Boulevard in Ocala on Monday. [Bruce Ackerman/Ocala Gazette]

After making do with its 3,000-square-foot building at 1121 SW First Ave. for years, the hospital district was ready to move.

Located next door to the Heart of Florida Health Care facility in the former Albertson’s supermarket at 2547 E. Silver Springs Blvd., the district recently moved into an 8,100-square-foot space that fits the bill for its growing undertakings.

One of the biggest upgrades in the new space is an executive boardroom that can accommodate up to 62 people.

“It’s a lot happier,” the MCHD’s chief operating officer Debra Velez said. “Especially with social distancing… The other office, it made it impossible to do any kind of social distancing, so this room is perfect for that.”

Another valuable addition to the new facility is its technological capabilities.

In the age of COVID-19 and the surge of conference calling, the executive boardroom, in addition to other conference rooms, are complete with video cameras and multiple screens throughout the facility – something that the former facility, which was built in 1966, didn’t provide.

“It’s very techy,” Velez said. “We didn’t have those opportunities available in our other space.”

A catering kitchen was another vital piece of the buildout, which cost the district a total of just more than a million dollars.

Complete with ample counter space, a full-size refrigerator and range, Velez envisions a space that will soon facilitate cooking demonstrations to encourage Marion County residents to adopt healthier eating habits through the work of the Active Marion Project (AMP), an initiative launched by the district to motivate the community to get healthier together.

Another pillar of AMP is the workplace wellbeing initiative, which focuses on improving the organizational health of employees and employers. And the district recognized the importance of practicing what they preach.

“We talk to our workplace sites all the time about needing to have, kinda, a timeout room,” Velez said. “So, without us having that ourselves, we can’t really preach to other people about having it.”

Just down the hall from the kitchen is a quaint workplace retreat featuring two recliners and ambient lighting, providing a space for MCHD’s staff to unwind.

And with a long list of upcoming initiatives and projects, MCHD’s staff will likely get a lot of use out of its “timeout room,” as well as the rest of its new home.

In addition to its AMP and Fitness and Nutrition in Schools (FANS) initiatives, the MCHD also continues to build upon its Beacon Point project, located at 717 SW Martin Luther King Jr. Ave. 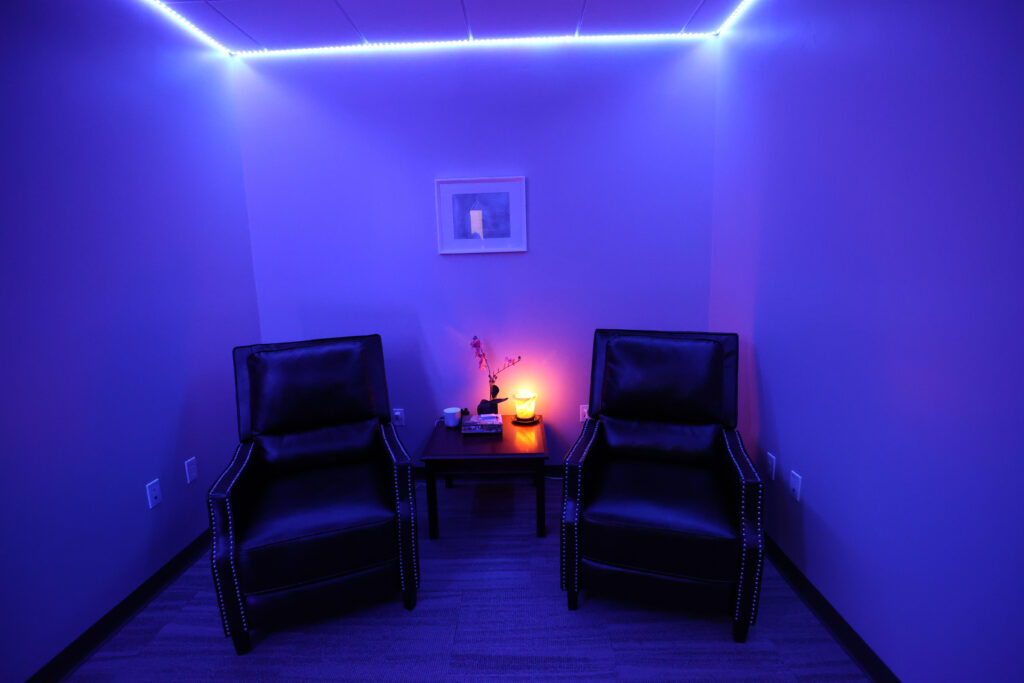 The hospital district owns the facility, but other organizations, including LifeStream Behavioral Center and The Centers, provide the services. The goal is to offer a one-stop campus for those struggling with addiction. The MCHD helps fund some of the services as well.

The project is paid for with the proceeds of nearly $213 million the Hospital District received after leasing the former Munroe Regional Medical Center in 2014. In 2018, AdventHealth bought the lease and eventually changed the hospital’s name to AdventHealth Ocala. The district still owns the hospital and enforces the lease conditions.

Since 2016, MCHD has made more than $9 million in grants to local agencies for programs targeting mental health/opioids, oral health, diabetes, obesity and tobacco cessation.

And according to Velez, there’s plenty left on the horizon.

“We have some other things coming up,” Velez said. “We’ll just have to reveal them at that time that it’s appropriate to.”